A 98-year-old Minnesota man is facing possible extradition to Poland after prosecutors confirmed that he was a top commander of... 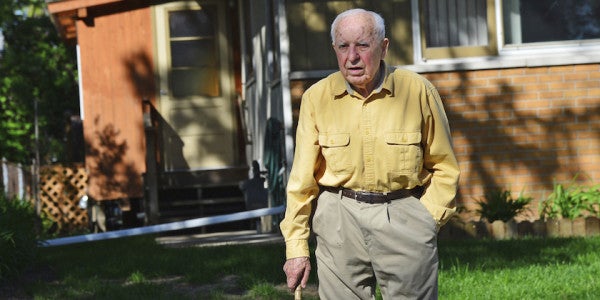 A 98-year-old Minnesota man is facing possible extradition to Poland after prosecutors confirmed that he was a top commander of a Nazi SS-led unit that burned Polish villages and killed women and children during World War II, the Associated Press reports.

Prosecutor Robert Janicki of the National Remembrance Institute, which investigates Nazi and Communist-era crimes against Poles, told the AP that after a years-long investigation, his office was “100 percent” certain that Minneapolis resident Michael Karkoc is the war criminal they had long suspected him of being.

“All the pieces of evidence interwoven together allow us to say the person who lives in the U.S. is Michael K., who commanded the Ukrainian Self Defense Legion, which carried out the pacification of Polish villages in the Lublin region,” Janicki said.

Records show that in addition to commanding a unit that massacred civilians in the village of Chlaniow, Karkoc had also participated in the brutal suppression of a Polish rebellion against German occupation in 1944 — the famed Warsaw Uprising.

Karkoc’s family, however, staunchly maintains that his hands are clean. “There’s nothing in the historical record that indicated my father had any role whatsoever in any type of war crime activity,” Andriy Karkoc told the AP. “My father’s identity has never been in question nor has it ever been hidden.”

Karkoc’s identity has been in question since at least 2013, when the AP published a story revealing that he was a founding member of the SS-led Ukrainian Self Defense Legion, and that he had also served in the SS Galician Division, a formation within the German military composed primarily of Ukrainian volunteers.

The story, based on wartime documents, testimony from other members of the unit, and Karkoc’s own Ukrainian-language memoir, described how Karkoc lied to American authorities about his wartime service to gain entry to the United States in 1949. Members of both the Ukrainian Self Defense Legion and the SS Galician were barred from entering the U.S. at the time.

Karkoc remarried after arriving in Minneapolis, where he worked in construction and fathered four children, the AP reports. He was also an active member of the the Ukrainian National Association.

This isn’t the first time that a foreign government has considered extraditing Karkoc from the United States. In 2015, German prosecutors shelved an investigation of Karkoc after concluding that he was medically unfit for trial.

However, Polish prosecutors — who, like their German counterparts, began investigating Karkoc after the AP story — have asked a Polish court to issue an arrest warrant for Karkoc. If granted, Poland would seek his extradition so he could stand trial for murder in Poland.

“It sends a very powerful message,” Efraim Zuroff, the head Nazi hunter for the Simon Wiesenthal Center, told the AP. “These kinds of things should not be abandoned just because of the age of a suspect.”