Why It Matters That McMaster Isn’t Taking Off The Uniform 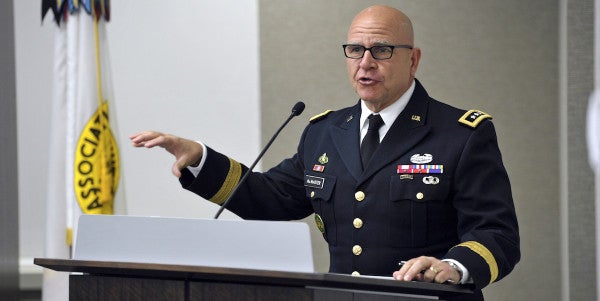 By choosing to remain on active-duty, Army Lt. Gen. H. R. McMaster, President Donald Trump’s pick for national security advisor, will be the first active-duty military leader to serve in that role in roughly 30 years. No national security advisor has been on active duty since then-Army Lt. Gen. Colin Powell held the role for President Ronald Reagan from 1987 to the end of the Reagan administration in 1989.

Related: As A Young Captain, McMaster Commanded One Of The Most Epic Tank Battles In History »

One of the biggest impacts of McMaster remaining in uniform concerns the Senate. The appointment of a national security advisor is not normally subject to congressional approval. The billeting of senior military generals, however, must be approved by the Senate. McMaster has a stellar reputation, and his selection was met by bipartisan praise, so his confirmation is not likely to be in jeopardy. By remaining on active duty, however, senators, especially Democrats, will get a new opportunity to critique Trump’s controversial national security agenda through McMaster hearings.

The other side of the coin is that as one of the military’s youngest and most dynamic general officers, McMaster now has the chance to continue his military career. After serving as national security advisor, Powell was promoted to full general, and briefly commanded U.S. Army Forces Command before being tapped by President George H.W. Bush to serve as chairman of the Joint Chiefs of Staff. One could certainly see McMaster on a similar trajectory after this appointment by Trump made him maybe the most interesting general in the U.S. military.