The Department of Defense has circumvented a mandate by President Donald Trump to stop preparing for climate change and, under... 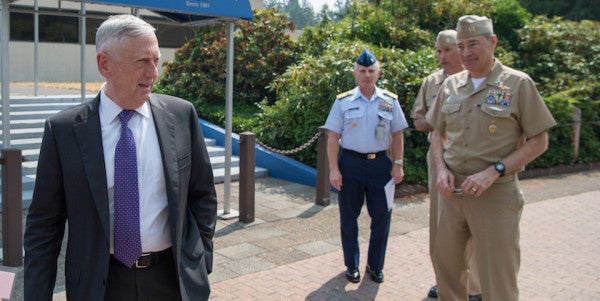 The Department of Defense has circumvented a mandate by President Donald Trump to stop preparing for climate change and, under Defense Secretary Jim Mattis’ leadership, is moving forward with an Obama-era plan to address global warming as a serious threat to national security, Military Times reports.

In March, Trump — who has repeatedly stated that global warming is a hoax fabricated by the Chinese to make U.S. manufacturing less competitive — rescinded all climate-related federal agency actions initiated by his predecessor. This sweeping move included reversing a directive from President Barack Obama that obliged the Pentagon to embrace the view long held by the scientific community — that climate change is real — and plan accordingly.

In 2014, the Pentagon conducted a review of military installations across the armed forces to identify vulnerabilities to extreme weather, while also assessing how the military could better prepare for an uptick in natural disasters like the back-to-back hurricanes that recently ravaged Texas, Louisiana and Florida.

The Pentagon report resulted in the publication of the DoD’s 2014 Climate Change Adaptation Roadmap, which laid out a series of steps for assessing and mitigating the effects of climate change on the DoD and military operations around the globe. The roadmap was implemented by Obama in January 2016 and invalidated by Trump’s March 28 executive order, according to Military Times.

Among those who do not believe climate change is a hoax is the Secretary of Defense. In March, Mattis vowed in a 58-page written testimony to the Senate Armed Services Committee that he would make addressing the threat climate change poses to U.S. national security a top priority as head of the Pentagon.

Mattis appears to be sticking to his word, even as the president remains convinced that climate change is a global conspiracy.

As Military Times notes, the Pentagon has found that, by focusing less on why more serious weather events are happening (i.e. climate change) and more on the fact that they are happening, the department can move forward with its original plan of preparing for an increase in both the frequency and strength of natural disasters. In other words, the DoD is just changing the way it talks about the issue.

“As Secretary Mattis has said, the department evaluates all potential threats that impact mission readiness, personnel health and installation resilience, then uses that information to assess impacts and identify responses,” Pentagon spokesman Lt. Cmdr. Patrick Evans told Military Times. “The effect of a changing climate is one of a variety of threats and risks, but it’s not a mission of the Department of Defense.”

Evans also said that the Pentagon is currently reviewing the Obama-era directive that implemented the “climate change roadmap” to “determine if it should be suspended, revised, or rescinded.”

This is a similar strategy employed by the DoD under Mattis following Trump’s Twitter announcement that transgender people would no longer be allowed to serve in the military. A review of that policy is also underway, leaving open the possibility that the transgender ban will never be implemented.

Meanwhile, tens of thousands of troops were deployed throughout areas impacted by Hurricanes Harvey and Irma to assist with relief efforts, including in the U.S. Virgin Islands and Puerto Rico, while seaside military installations scrambled to mitigate weather damage to buildings, aircraft, and ships.

According to the 2014 climate change roadmap, one area especially vulnerable to extreme weather is the Hampton Roads region of Virginia, which, as Military Times notes, is home to more than 60 Navy ships, hundreds of fix-wing and rotary aircraft, and more than 83,000 active duty personnel. The now-invalidated roadmap laid out preparations to safeguard those assets from a “projected sea-level rise of 1.5 feet over the next 20 to 50 years.”

A spokesman for Naval Facilities Engineering Command Mid-Atlantic, which is responsible for the ensuring Hampton Roads is protected from natural disasters, told Military Times that it plans to continue fortifying the installation for future extreme weather.

“I can’t talk the science, but I can tell you what we’ve done,” said Todd Lyman, the NAFAC spokesman. “For many years, NAVFAC has been replacing any single-deck pier with double-deck piers. We’ve also built structures here at a higher elevation than code requires in an effort to improve stormwater management. The goal is for us to continue our mission, maintain resilience.”