Remember that extremely awkward speech President Donald Trump delivered at the TK summit in Brussels, Belgium on May 25? You... 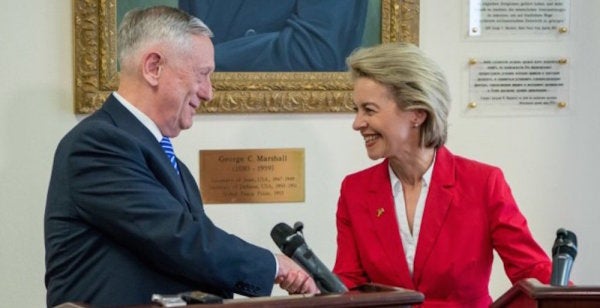 Remember that extremely awkward speech President Donald Trump delivered at the TK summit in Brussels, Belgium on May 25? You know, the one where the leader of the free world went off-script at the last minute and glossed over America’s commitment to Article 5 of the NATO Charter? Well, NATO certainly does — and luckily for the U.S., Secretary of Defense Jim Mattis is here to clean up the mess.

“The U.S. commitment to our NATO Article 5 security guarantee is ironclad,” Mattis told the attendees of a 70th anniversary celebration of the post-World War II Marshall Plan on June 28 at the George C. Marshall European Center for Security Studies in Garmisch-Partenkirchen, Germany. “Our nations stand together, democratic islands of stability in a world awash with change.”

If you’re not familiar, Article 5 stipulates that an attack on one NATO partner nation is considered an attack on the entire alliance, and other member states are expected to pledge military support as part of the treaty’s underlying principle of collective defense. Trump, however, made no mention of this in Brussels, because he went off-book.

In addition to reaffirming the country’s stance on Article 5, Mattis also said that the U.S. will actively participate in NATO's forward presence through 2020, adding that the Pentagon accounted for $4.8 billion for the European Reassurance Initiative in its 2018 budget request — up from $3.42 billion in FY17.

This is not the first time that Mattis has been forced to make reparations for the president’s faux paus Earlier this month, Mattis reassured allies in Southeast Asia of the U.S. plan for continued cooperation and support in the region, which was growing uneasy because of Trump’s posture on disengagement from the area — particularly in the form of pulling out of the Trans-Pacific Partnership.

Mattis, however, reaffirmed that the U.S. will remain steadfast in its pivot to the region.

“The United States will continue to adapt and continue to expand its ability to work with others to secure a peaceful, prosperous and free Asia, with respect for all nations upholding international law,” Mattis said during a speech in Shangri-La, Singapore. “Because we recognize no nation is an island, isolated from others, we stand with our allies, partners and the international community to address pressing security challenges together.”

But it’s not just military fires that Mattis seems tasked with putting out. He has also been outspoken in his support for the the Paris Agreement, an international treaty that seeks to mitigate human-caused climate issues that, in the Pentagon’s assessment, could pose long-term problems for global military operations worldwide. Despite Trump’s purported plan to pull out of the arrangement, Mattis suggested on May 27 that the U.S. may remain open to honoring its agreement to the landmark accord (On June 1, Trump formally pulled out of the Paris Agreement anyway).

Despite this, Mattis continues to quell complex national security crises with aplomb. And although it’s reassuring to know that the Pentagon is in such steady hands, we’d also be totally OK with Mad Dog breaking the leash and raining down some chaos on the appropriate targets.