When President Donald Trump addressed the other leaders of the North Atlantic Treaty Organization last week, he shocked them by... 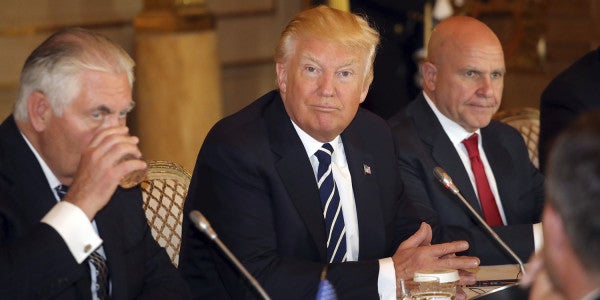 When President Donald Trump addressed the other leaders of the North Atlantic Treaty Organization last week, he shocked them by demanding member countries pay their dues — even though they don’t have dues. But even worse, Trump ignored Article 5, the idea that an attack against one member is an attack on all. When you fail to mention a NATO founding principle — which has been invoked only once in the alliance’s nearly 70-year history, to support the U.S. after the September 11, 2001 terror attacks — that’s the diplomatic equivalent of egg on your face.

As it turns out, most of Trump’s national security advisers — including Lt. Gen. H.R. McMaster, Defense Secretary James Mattis, and Secretary of State Rex Tillerson — were also horrified by the president’s speech for a simple reason: It wasn’t the one they’d approved.

The three men all had advised Trump “to include the language reaffirming the so-called Article 5 provision in his speech,” according to Politico’s Susan Glasser, “and had worked in the weeks leading up to the trip to make sure it was included in the speech, according to five sources familiar with the episode.”

Trump aides told news media that a solid Article 5 commitment to NATO allies wasoriginally included in the president’s speech, according to Glasser. “They had the right speech and it was cleared through McMaster,” a source told her. “As late as that same morning, it was the right one.”

But when Trump started talking, the infamously quixotic commander-in-chief went off script, and his national security team “realized their boss had made a decision with major consequences—without consulting or even informing them in advance of the change,” Glasser writes.

So what happened? According to Glasser’s sources, one of two things:

Whatever the explanation for Trump’s unexpected speech — and those two seem at least plausible — it’s opened a rift in his administration and suggests that the “cooler heads” advising the White House on national security, running the U.S. military and diplomatic corps, cannot prevail on Trump when Trump wants to Trump.

And that raises questions about what other counsels of prudence an increasingly erratic president might ignore down the line. “Are these people going to steer Trump,” one ex-U.S. official told Glasser, “or are they simply going to be made enablers?”