Trump Aide Connected To 2006 Attack On US Marines in Ukraine

'It was a total surprise.' 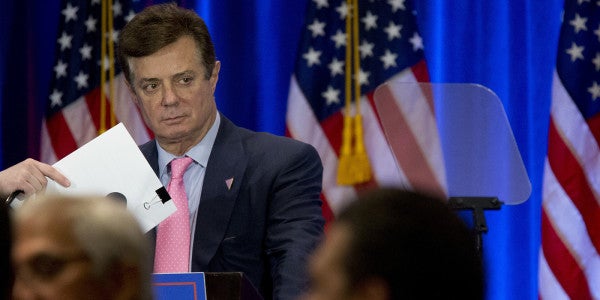 Feodosia, the Black Sea resort town in Ukraine’s Russian-dominated Crimean Peninsula, is usually a peaceful place — far from the political power in Kyiv, and far from worries for the tourists who stroll its promenades and laze under sun tents on its beaches.

For Lt. Colonel Tom Doman, Feodosia was a shitshow from the minute his detachment of 113 reserve Marines and sailors arrived there in the dark on the morning of May 27, 2006.

“We had rocks thrown at us. Rocks hit Marines. Buses were rocked back and forth. We were just trying to get to our base,” Doman, the Marines’ executive officer, told me and my colleagues last year.

The Marines had been sent in as an advance party for an upcoming NATO military exercise, part of a blossoming in relations between Ukraine and the United States. In addition to constructing facilities for the exercise, the Marines were coming prepared to do some civil affairs work for the local population. “Ukraine wanted to come into NATO. We were trying to build our relations,” Doman said. “It was a total surprise we would get that.”

And they couldn’t accomplish their mission. The Marines eventually left, having achieved very little.“We basically waited out two weeks and under the cover of darkness one night got to an airstrip and flew home,” Doman said. The protesters were happy, but “the civilian population was extremely sad when we left,” Col. Bill Black, the Marines’ CO, told us. “We were there to do some construction work, build a new soccer field, children’s play area.”

The NATO joint exercise was scrubbed altogether. President George W. Bush canceled a trip to Ukraine the following month. A few years later, the Russian nationalist fervor that confronted the U.S. Marines in Feodosia led to the crumbling of Ukraine’s government and Russia’s annexation of Crimea.

Today, more than a decade after the siege on the Marines at Feodosia, evidence is gathering that an American citizen was being paid millions by the protest’s organizers to advise them on their political strategy. But he’s no ordinary American citizen: He’s Paul Manafort, longtime political money man, Trump Tower resident, and former manager of Donald Trump’s successful campaign for president.

Manafort is in deep legal trouble, and it’s only getting deeper. Last month, his home was raided in connection with the Russia election-interference investigation led by former FBI director Robert Mueller. That investigation is now coordinating its probe into Manafort’s potential financial crimes with the New York attorney general, raising the specter of state charges against him — charges that couldn’t be erased by a presidential pardon. Every day, reporters are rolling out more details on how Manafort allegedly enriched himself for years working for a despotic Ukrainian political party with ties to Russian President Vladimir Putin — and how he might be able to shed further light on the Trump campaign’s questionable Russian connections.

As I reported last year, American officials remain convinced that the attacks on Marines in Feodosia were organized by the mob-connected, Kremlin-friendly Party of Regions, which was then trying to restore its influence in the region with Paul Manafort’s help.

In short: An American citizen who helped elect a conservative president with a strong patriotic, pro-military message was on the payroll of a foreign group that the U.S. government believes directly threatened its military personnel and undermined its foreign policy. Ukrainian officials and some former U.S. diplomats I’ve spoken to are convinced that Manafort knew about, and possibly helped plan, the anti-American protests.

It sounds outrageous, and amid 2016’s outrageous election cycle, the story didn’t get much play — especially since Manafort officially resigned from Trump’s campaign last summer, amid a flurry of negative stories about his Ukraine and Russia connections. But as Mueller’s investigation ramps up and focuses on Manafort’s financials, new reports lend additional credence to the possibility that Manafort was at least partly culpable in the targeting of U.S. Marines.

There were some important facts I didn’t know when reporting that story last year. We knew that since 2004, Manafort had been a paid consultant for Viktor Yanukovych, a former gangster turned Ukrainian strongarm president with ties to organized crime and Vladimir Putin. We knew that Yanukovych was in need of a deep image makeover. He’d lost the presidency amid rumors that, with Kremlin assistance, he’d tried to rig his 2004 re-election vote and even poisoned his opponent, pro-U.S. reformist Viktor Yushchenko. But we didn’t know exactly how long Manafort’s work for the Party of Regions lasted, what the work really involved, or how much he was paid for it.

Thanks to an investigative story published yesterday by the Wall Street Journal, we can fill in a lot of those details — and they add up to a problem for Manafort.

After he lost power, Yanukovych and a longtime political ally — a Putin-connected mining oligarch named Rinat Akhmetov — cemented a deal with Manafort’s firm in mid-2005 to help engineer a comeback for their party, the Party of Regions, in the Ukrainian parliament. We know this because WSJ got one of Manafort’s employees, Philip Griffin, to talk.

That strategy worked: In exchange for $20 million, Manafort’s team helped the Party of Regions win the largest share of the vote in those elections in March 2006. But Yanukovych and his party still needed a coalition to get the parliamentary majority that could make him prime minister — he’d need Ukraine’s socialists and communists to help him across the line. He needed political advice. And Manafort gave it to him, WSJ reports:

After Manafort advised his clients to whip up Russian nationalism in Eastern Ukraine and stand up against the Ukrainian president’s pro-NATO tilt, the Party of Regions organized those attacks on the landing Marines, according to U.S. and Ukrainian officials.

Internal State Department cables show that the organizers had used fake news to whip up some of the protests — claiming the Marines’ landing was part of a NATO invasion of Ukraine. Other protesters were political operatives and hired muscle. Yanukovych allies were doing more than waving signs: In addition to throwing rocks and swarming buses, they actually tried to get into the Marines’ makeshift barracks as well as a ship containing the Marines’ cargo.

The U.S.’s joint military exercise with Ukraine was scrubbed. President Bush cancelled his trip to meet with his now-embattled counterpart in Kiev. More importantly for Manafort’s clients, Ukraine’s president had been embarrassed, U.S. influence in the region was diminished, and Yanukovych was able to exploit a wave of pro-Russian, anti-NATO sentiment to consolidate power. By the end of the summer, Ukraine’s communist and socialist parties had united behind him as prime minister. By 2010, Yanukovych had grown powerful enough to again be elected president.

Needless to say, U.S. diplomats were furious at Manafort. It was a former high-ranking State Department official who first suggested to me that I look into the attack on the Marines. And a retired U.S. ambassador made this understated comment to WSJ yesterday:

Despite the criticism, Manafort kept on working for the Party of Regions and Yanukovych until the party boss was forced out of the presidency for the last time in a 2014 coup. Documents found in a lake at Yanukovych’s abandoned mansion that year appear to show $12.7 million in undisclosed payments to Manafort for his longtime consulting with the tinpot dictator, who fled to Russia.

It seems reasonable at this point, then, to assume either that Manafort knew about his clients’ involvement in the protests against U.S. Marines, or that he’s terrible at his job. And if he knew, certain questions immediately come to mind: Did he know about the operation before it was executed? Did he suggest it, or participate in its planning? And if he merely learned of his clients’ role in the protests after the fact, why did he continue working for them?

On one hand, it seems unbelievable: A dyed-in-the-wool, conservative “MAGA” American going to bat for a bunch of foreigners who targeted U.S. troops. It would have seemed far-fetched at any point in American history.

On the other hand, it’s 2017, and the whole affair — a Russian-backed influence campaign, using fake news, to whip nationalists into a frenzy for political gain — sounds eerily familiar to Americans now. As investigators close in around Paul Manafort, he’s probably going to have to answer some tough questions about that time his paying clients threatened America’s deployed service members.