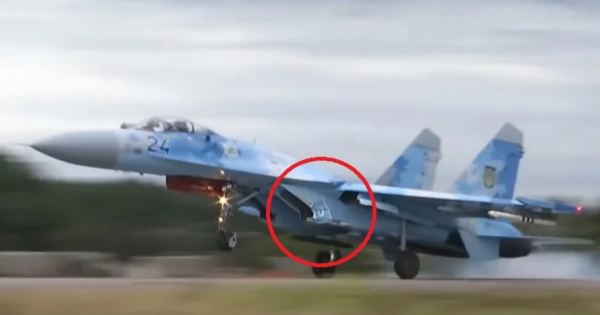 Talk about a rough landing.

A Ukrainian Air Force fighter jet collided with a road sign on a highway outside of the country's capital of Kiev on Thursday, Defence Blog reports.

The jet, one of two UAF Sukhoi Su-27 heavy fighter jets dispatched to the region for military exercises, was practicing taking off and landing on improvised runways on Ukraine's Highway M06 near the Hungarian border.

Details of the incident are scarce, but video that aired on Ukrainian television and began circulating on social media on Thursday, one of the fighters appears to miscalculate during a landing, tearing a road sign from the highway.

Blink and you'll miss it:

Here it is again in slow motion thanks to a handy video from Defence Blog:

And here's a photo of the aftermath:

The Sukhoi Su-27 'Flanker' is a twin-engine fighter jet designed to deploy heavy payloads and high speeds while remaining famously maneuverable. The UAF inherited around 70 SU-27s following the collapse of the Soviet Union.

This incident shouldn't have happened, really: Highway's M06's bus stops and lamp posts were temporarily removed in the days leading up to the exercise, according to Defence Blog, likely to unsure that the Su-27's 48-foot wingspan remained unhindered during practice landings.

Then again, things could have been way worse. Additional video from the same exercise shows one of the jets nearly coming down right on top of spectators lining the highway:

If there's one thing UAF pilots are known for, it's ultra low passes — and in the case above, the pilot didn't disappoint.