COVID-19 squashes some of the Marine Corps’ biggest balls 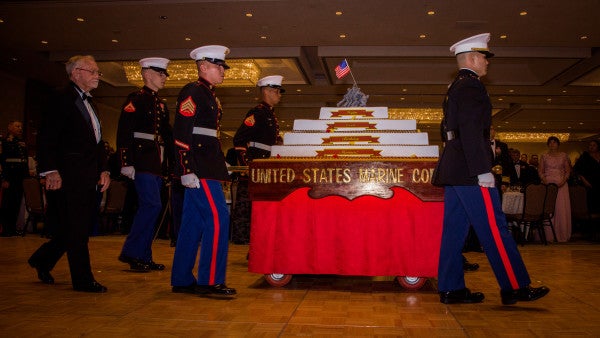 COVID-19 has squashed some of the Marine Corps' biggest balls.

The top enlisted Marine had warned in July that celebrations of the service's 245th birthday in November would probably be limited due to the novel coronavirus pandemic.

Now the top Marine officer has canceled the 2020 Commandant's Birthday Ball as a necessary step to “protect our people.”

Marine Gen. David Berger decided to forego hosting the ritzy affair planned for Nov. 7 at the Washington Hilton in favor of a small cake-cutting ceremony that will be videotaped and shared later, said Maj. Eric Flanagan, Berger's spokesman.

About 3,000 people typically attend the commandant's ball, he said.

“This decision applies only to the commandant’s birthday ball,” Flanagan said. “Commanders throughout the Marine Corps have the ability to decide on their own birthday celebrations, within local guidelines and while following mitigation measures.”

Though all U.S. military services celebrate their founding, the Marine Corps often holds grand events around the world to celebrate its birth on Nov. 10, 1775. Marines and their guests usually wear their best formal wear, and events typically feature a color guard, rousing speeches, dinner, dancing, and for some, an inevitable hangover the next morning.

The first official birthday ball for the Marine Corps was “probably held” in Philadelphia, Pennsylvania, in 1925 since no records have been located prior to that year, according to the Marine Corps History Division. Marine birthday celebrations were mainly spontaneous events until they were established as official celebrations in 1956.

“We relish 'going big' and making a grand celebration of the founding of our Corps,” Sgt. Maj. Troy Black, sergeant major of the Marine Corps, wrote in a July memo.

“Like you, I enjoy these occasions, and I look forward to when we are not challenged by COVID mitigation measures such as travel restrictions, social distancing, and size restrictions on gatherings.”

Flanagan noted that the only requirements for the Corps' birthday are that Marines hold a formation, recognize the oldest and youngest Marine in attendance, cut a cake, and read the 1921 birthday message from Gen. John A. Lejeune, the former commandant.

“All of these activities can occur while following COVID-19 mitigation measures,” Flanagan said. “Until we can once again celebrate in large social gatherings, taking necessary steps to protect our people while honoring the birth of our Corps is what will matter most this November.”

But Marines can still have a memorable birthday celebration despite the lack of a formal ceremony, according to Sgt. Maj. Black. While deployed to Iraq in 2005 as a company first sergeant, he explained, Black went to each platoon's defensive position in Husaybah, celebrating the birthday in the middle of combat.

“We had a small formation with each platoon, we cut an MRE pound cake, we presented a piece to the oldest and youngest Marine in the platoon, and we read General Lejeune's birthday message,” he wrote. “We did all this by flashlight.”

Still, it's going to be much harder for Marines to get a celebrity to attend this year.

Related: The Marine Corps' Official Birthday Video Is Out — And It's Motivating AF