'Marines are unnecessarily being put at risk of infection in order to comply with traditional grooming standards that may be optimal in an ideal world but are inessential and can be relaxed in the real world without doing any damage at all to institutional mission or national security.' 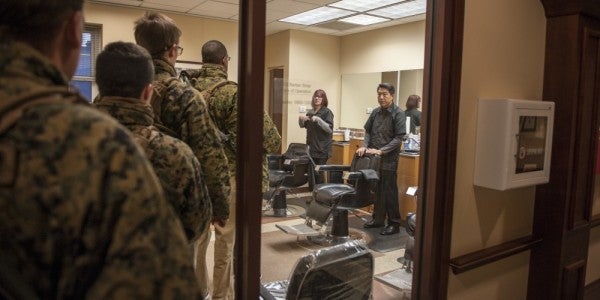 A Democratic congressman from Maryland has asked the Marine Corps to ease grooming standards so that Marines are not unnecessarily exposed to the novel coronavirus (COVID-19) while getting haircuts.

“It would only take one infected Marine sitting down in a barber chair, or one infected barber breathing too close to a client, to start a chain reaction that could infect a large population that forms part of our fighting force,” wrote Jamie Raskin in a recent letter to Marine Corps Commandant Gen. David Berger.

Speaking to Task & Purpose on Thursday, Raskin said he was prompted to take up the haircut issue with Berger after being contacted by a couple of Marines’ family members. One of the congressman’s staffers then looked into the matter and discovered the problem was widespread.

I’m asking the @USMC Commandant to temporarily relax grooming standards in the Marine Corps during the COVID19 pandemic to avoid putting Marines & base barbers at unnecessary risk of infection. Our fighting forces protect us & we must protect them (with no risk to nat. security). pic.twitter.com/meuZG9ToOv

“We obviously don’t want to do anything that compromises national security or military cohesion, but I think within those constraints, there’s a lot that can be done to dramatically reduce the risks of infection between barbers and service members,” Raskin said.

Raskin wrote in his April 21 letter that Americans have been urged to avoid gatherings of more than 10 people, yet large groups of Marines have been “routinely observed” waiting in line to get a haircut. A video taken at Camp Pendleton, California, on April 5 showed Marines crowding outside a barber shop in a long line before social distancing measures were implemented there.

“Marines are unnecessarily being put at risk of infection in order to comply with traditional grooming standards that may be optimal in an ideal world but are inessential and can be relaxed in the real world without doing any damage at all to institutional mission or national security,” Raskin wrote.

By the nature of the trade, barbers and Marines cannot remain at least 6 feet during haircuts, he wrote. In the civilian world, barber shops have been closed to slow the spread of the coronavirus.

Interestingly, the Marine Corps on Thursday canceled its requirement that Marines conduct a physical fitness test for the time being, citing social distancing concerns that can apply just as well to a barber's chair or a pull up bar.

Berger’s spokesman Maj. Eric Flanagan confirmed the commandant had received Raskin’s letter but declined to say how Berger might respond, citing “the privacy of communication with Congressional members.”

As of Thursday, Raskin had not yet received a response from Berger or the Marine Corps, he told Task & Purpose.

He also said he hopes the Marine Corps looks at how the Navy and Air Force have relaxed haircut requirements in light of the COVID pandemic.

“I have no reason to think that the Marine Corps won’t take into account the concerns that have been raised,” Raskin said. “

This is just one of the issues that military families have been asking for Raskin’s help with during the coronavirus outbreak, he said.

“Obviously, the coronavirus is a matter of life and death for our people,” Raskin said. “I’ve had other military families get in touch about big lines for service members outside of dining halls – and some have been concerned about the reduction in dining services and their sons and daughters going without meals because they just don’t want to wait in long lines.”