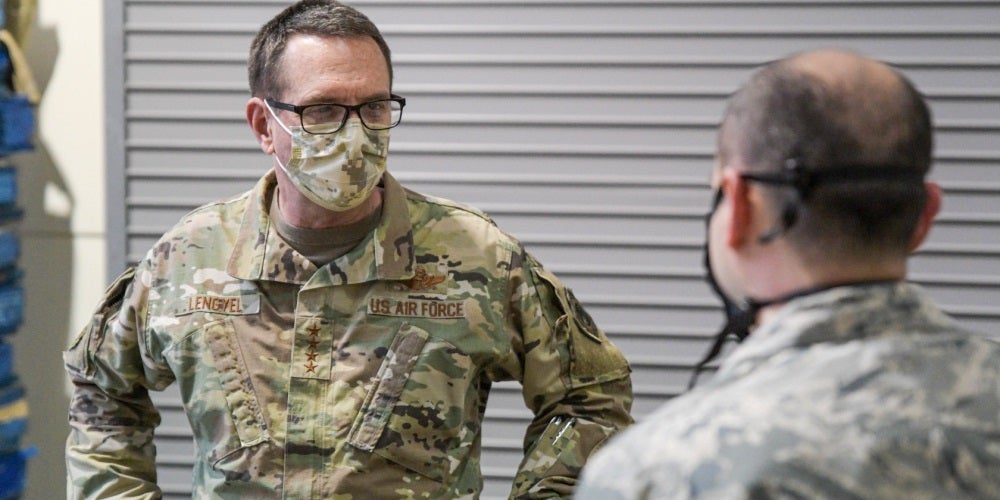 The head of the National Guard Bureau has tested negative for the novel coronavirus (COVID-19) for a second time in a row after a scare over the weekend, defense officials announced on Monday.

Air Force Gen. Joseph Lengyel initially tested positive for the coronavirus on Saturday, and that caused him to miss a meeting with President Donald Trump and senior military leaders.

Lengyel is continuing to direct the National Guard’s role in helping states fight the coronavirus, Houk told Task & Purpose. Meanwhile, the National Guard is taking steps to protect guardsmen from getting the disease by requiring them to wear masks, encouraging telework, and replacing meetings with video teleconferencing.

“Thank you to all who have expressed concern for my health and safety,” Lengyel said in a statement. “I am happy to continue to focus on the efforts of the 46,000 Guardsmen and women who are battling this pandemic in the 50 states, three territories and District of Columbia.”

Chief of Naval Operations Adm. Mike Gilday also did not attend Saturday’s meeting with the president because he had come into contact with a relative who has the disease.

Gilday will be in quarantine for at least a week. He is working from home and has tested negative for the coronavirus, said his spokesman Cmdr. Nathan Christensen.

The coronavirus is reaching the highest levels of government. A sailor serving as the president’s valet and Vice President Mike Pence’s spokeswoman both tested positive for the disease last week.

Yet Trump and defense officials did not wear masks during Saturday’s meeting at the White House or at a May 8 event to mark the 75th anniversary of the end of World War II in Europe.

The Washington Post pointed out on Friday that Esper had given challenge coins to World War II veterans without wearing a mask, noting that older people are at a higher risk of getting the coronavirus.

Pentagon spokesman Jonathan Hoffman tweeted that Esper had tested negative for the coronavirus two hours before the commemoration.

Still, Esper’s lack of basic protection is all the more perplexing given the Defense Department’s repeated reminders to service members that they are expected to practice safe social distancing during the coronavirus pandemic.

Esper became visibly irritated during an April 14 Pentagon news briefing when a reporter told him about a video taken at Camp Pendleton, California, on April 5 that showed Marines closely bunched up together and not wearing masks as they waited to get their haircut at a base barber shop.

“I’m sure the commandant, if he’s watching, is probably already on it, but if not the chairman is going to give him a call and say: What is going on?” Esper said at the news conference. “What don’t you guys understand?”