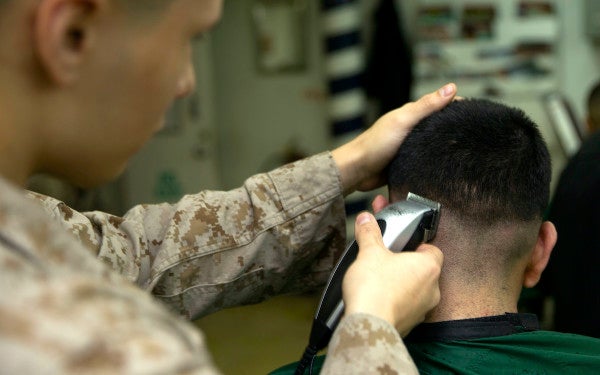 California, like virtually every other state in the country, is in a form of broad shutdown to help curb the spread of the novel coronavirus (COVID-19), with non-essential businesses closed and residents advised to stay at home.

Yet the commander of tens of thousands of troops at Camp Pendleton wants Marines to keep their cuts high and tight — and base barber shops are more than happy to oblige.

Needless to say, the video released by officials at Pendleton came across as particularly tone deaf when it was released on Friday, as several current and former military service members pointed out on Twitter. San Diego County, where Pendleton spans some 30 miles of coastline, has reported 1,693 confirmed COVID-19 cases and 44 deaths, according to the latest figures released by local government officials.

The Marine Corps had 173 confirmed cases of COVID-19 on Friday, according to the Pentagon — up from 73 a week ago.

In this era of increases to force health protection conditions and the abundance of caution that comes with it – the @USMC decides to go with this. Ok, let's see how this plays out. What could possibly go wrong? https://t.co/I77OtUmSMs

This will not end well… https://t.co/L9sQy4hpkY

Wonder what the Camp Pendleton public health officer's liquor of choice is. https://t.co/Pr8MH1iQtL

HAIRCUTS ARE NOT ESSENTIAL FUCKING SERVICES

HOW IS THIS SO DIFFICULT TO UNDERSTAND https://t.co/WZOoVkE1nt

Keeping base barber shops open is a problem for several reasons. First of all, the state of California's directive regarding non-essential businesses shuttering  explicitly includes “hair and nail salons,” probably because, as both altars to hygiene and beloved meeting spaces, they present high-risk areas for the spread of COVID-19.

The Navy and Army have closed their barber shops as a preventative measure, even if that doesn't mean (totally) relaxed grooming standards for U.S. service members.

And the Marine Corps' current Health Protection Condition-Charlie (HPCON-C) directive for the spread of COVID-19, issued weeks ago, dictates that the Corps adopt “broad social distancing” measures like the closure of schools and the cancellation of large meetings; while there's no specific measure for grooming standards and related facilities, the obvious implication is that barber shops should close as well.

“Since [Headquarters Marine Corps] hasn't relaxed grooming standards for Marines, safe options must be available for Marines to obtain haircuts,” Carl Redding, a Camp Pendleton spokesman, told Task & Purpose. “Federal installations don't have to abide by state orders even though they try to align as much as possible.”

To be clear, not all Marine installations are toughing out the pandemic. As Marine Corps Times previously reported, a barber shop aboard Marine Corps Logistics Base in Albany, Georgia, has recently closed because it was, according to a base spokesman, “currently in a higher threat environment with respect to COVID-19 cases.”

But in the case of Camp Pendleton, the continued operation of the barber shop comes in direct defiance of both state health directives and common sense. And they aren't the only ones: barber shops at Camp Lejeune, North Carolina, and Quantico, Virginia remain open despite orders from state Govs. Roy Cooper and Ralph Northam, respectively.