Switzerland may have the oldest policy of military neutrality on the planet, but it sure as hell plans on going to war against the novel coronavirus (COVID-19). 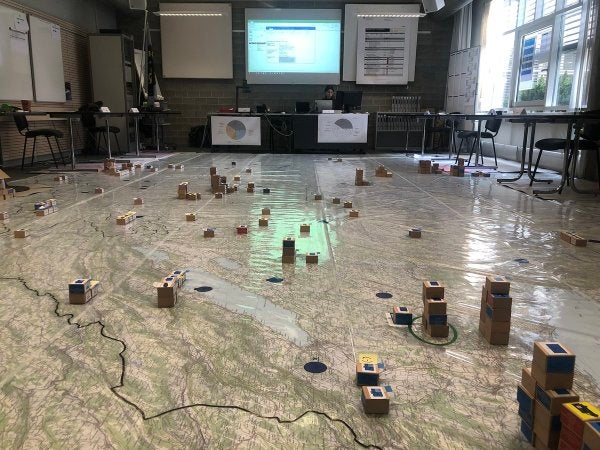 Switzerland may have the oldest policy of military neutrality on the planet, but it sure as hell plans on going to war against the novel coronavirus (COVID-19).

As of Monday, Switzerland has nearly 16,000 confirmed cases of COVID-19, and while that pales in comparison to the outbreaks in the United States and Italy, it's still the highest rate per capita, according to Business Insider.

To combat the spread of the disease, the Swiss Armed Forces has resorted to massive national map to track the deployment of its various medical assets around the country, a map recently shared on Twitter by SAF chief Lt. Gen. Thomas Süssli:

“The national map is intentionally redundant to the electronic situation picture,” Sussli wrote on Twitter, noting that the model was designed “to be ready even in the event of a power or system failure.”

The SAF has taken a series of unprecedented steps to combat the spread of COVID-19, activating its largest military mobilization since World War II and calling up roughly 8,000 militia personnel to offers health, logistics and security support through June 2020.

Indeed, the SAF has mobilized “the totality of the medical forces of the Swiss army” — 3,800 to 4,000 troops — to bolster regional hospitals, SAF Brig. Gen. Raynald Droz told France 24, while militia forces are supporting the country's health care system through nursing care and hospital logistics, according to Swissinfo.

As of 2019, the SAF had an active-duty force of 175,790, of whom roughly 9,120 are full-time professionals, according to the latest government statistics.

“The army, which has stayed out of wars for centuries, is famous for its extensive preparations, building anti-tank defenses during World War Two and nuclear bunkers in the mountains during the Cold War,” Reuters reports. “Its four hospital battalions have done modules that cover disasters such as earthquakes and epidemics and did a crash-course in coronavirus last weekend.”

It may not be the same as, say, using Legos to game out the invasion of Iraq, but the SAF's COVID-19 map is some serious old-school cool.