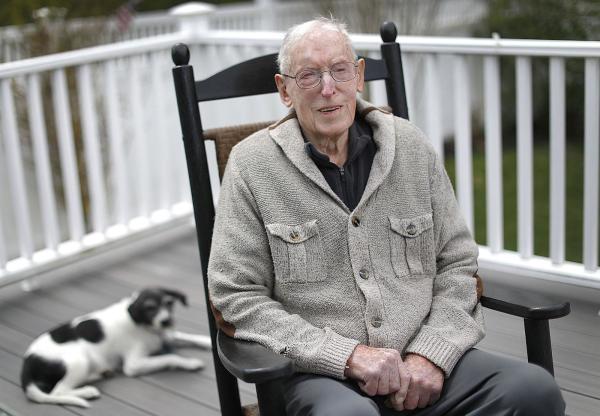 QUINCY — Squantum resident Arthur “Mac” McIntosh is looking forward to his 101st birthday this week after overcoming a case of COVID-19, the respiratory disease associated with the coronavirus pandemic.

The World War II veteran and two of his children said they have recovered from the coronavirus after contracting it at the end of March. Arthur McIntosh's children were thankful their father survived the disease, which has hit older people especially hard, and has claimed the lives of 4,840 as of Saturday in Massachusetts.

Arthur McIntosh's son Chip McIntosh, 52, was the first of the family to get COVID-19, diagnosed on March 18.

Chip McIntosh, who works on supply management at Beth Israel Deaconess Medical Center in Boston, said it started with a fever and a headache, and he knew immediately what it was. He headed to Quincy Medical Center to get tested. Chip McIntosh said the disease could have come from anywhere; besides working at a hospital, he also commutes into Boston on the MBTA.

“Who knows how I got it,” Chip McIntosh said in a phone interview Sunday.

He moved to a hotel immediately to self-quarantine and took every precaution to avoid spreading COVID-19 to his father, with whom he lives, and his sister, Marifrances McIntosh, 72, of Vermont, who was staying in Quincy to help out. Despite their best efforts, both Arthur and Marifrances McIntosh came down with COVID-19.

Marifrances McIntosh said her dad has a preexisting lung condition after decades of working as a plumber and they feared the worst because of his age.

“Initially we thought this would be his demise,” Marifrances said. “But he has a strong constitution. He got through it, God bless him.”

Arthur McIntosh, an ice cream lover, was even brought some of his favorite dessert. His children said their father started recovering after about 10 days.

Marifrances McIntosh said her father is the oldest living member of Boston's Plumbers & Gasfitters United Association Local 12 and was a U.S. Army truck driver in World War II, landing in Normandy, France, after the Allied forces invasion there in 1944.

Chip McIntosh, who had the worst symptoms of COVID-19, called the disease “terrible.”

“You think you're getting better, and hits you again,” he said.

Arthur McIntosh, who described having chills with COVID-19, offered this advice for people his age who get the disease.

“Keep moving around,” the veteran said.