This WWII vet got a mohawk the night before D-Day. Now he’s doing it again to spread cheer during COVID-19

“A lot of people are going through a lot of problems with the [coronavirus] ... I just thought this would add a little humor or something to the whole thing.” 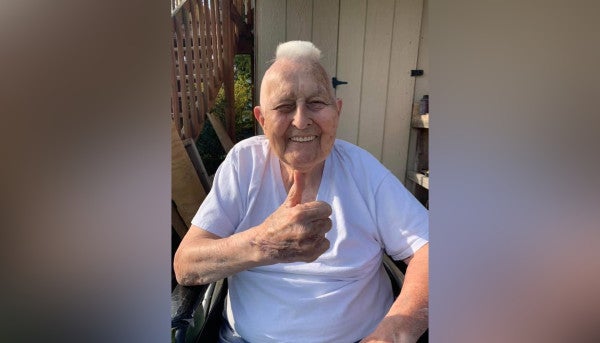 Guy Whidden has had his hair styled into a mohawk before — if only for a few hours.

While serving in World War II, many American troops shaved the sides of their heads to try to intimidate the Germans. Whidden followed suit the night before D-Day. He was the only one in his platoon who did, although he knew men in other platoons who had.

When his lieutenant saw it, he asked that he shave it off. He did.

So now, at 96, Whidden has a mohawk, thanks to a little help from his granddaughter Lydia Arshadi.

She helped him film a YouTube video of the process, which has since gained 70,000 views on Facebook. And no one's asking him to shave this one off.

“A lot of people are going through a lot of problems with the [coronavirus], some of them are frightened, some of them are just concerned, and they're locked in and it gets boring to a certain extent,” Whidden said. “I just thought this would add a little humor or something to the whole thing.”

Whidden has done a lot to keep the memories of his fallen comrades alive, from going to Normandy every year to jumping out of a plane on the 50th anniversary of D-Day. He was the only one of his squad that made it out of D-Day alive.

“We did it to inspire people to do it, as an homage and honor to his fallen comrades, and kind of thought it was funny so we videotaped it,” Arshadi said.

The video has been shared hundreds of times online, and Whidden and Arshadi have received dozens of photographs from people who have also cut their hair into a mohawk, many of whom are in the military themselves.

“I've always been optimistic all of my life. A smile goes a long ways,” Whidden said. “So I thought that might create a little interest among my airborne friends, a lot of them who are currently airborne, not just the old timers like myself. I don't think any of them are interested in wearing a mohawk. But I’d like to.”

For Whidden, bringing people together with something fun and lighthearted is important right now.

Whidden said that he’s seen people working together in news stories on TV and in newspapers. That, at least, is providing him hope that the world is becoming more caring.

While he lives alone in an apartment beneath his son and daughter-in-law, he has still been going out on walks with his walker at a nearby track. He said he was still running regularly up until a few years ago when he had a stroke.

Arshadi, who left her place in New York City to stay with her family before the stay-at-home orders went into place, is setting him up to play digital bridge with his friends, who he’s used to seeing regularly. He’s also figured out how to use Zoom and other video chatting apps.

Arshadi is just glad she could help out.

“I felt very privileged to do this as a tribute to his fallen comrades. But more importantly, it's just a way for us to bring everybody together, and make things a bit more lighthearted than they are now,” she said. “And I think aside from the tribute, everybody got a good giggle to see a 96-year-old with a mohawk.”