A new World War II television series is coming, and this one is based on wildly popular first-person shooter Brothers in Arms: Road to Hill 30. 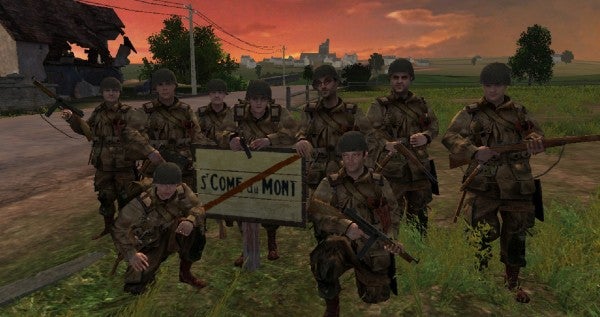 A new World War II television series is coming, and this one is based on a wildly popular first-person shooter: Brothers in Arms: Road to Hill 30.

The series will pull in heavyweights from three arenas, television, film, and gaming, according to The Hollywood Reporter.

Screenwriter Scott Rosenbaum will produce the show alongside Randy Pitchford, the CEO of the game's developer, Gearbox. Richard Whelan, who worked on Band of Brothers: The Pacific and Captain America, will join them as a producer, alongside Sean Haran, the chief business officer for Gearbox, and Jean-Julien Baronnet (Assassin’s Creed).

The console and PC first-person shooter Brothers in Arms launched in 2005 and put the player in charge of small teams of soldiers. The game places a premium on squad-level tactics as you direct your men to lay down suppressive fire while you and other teams advance on a target — or do whatever fits your play style and the mission at hand.

Those missions, it seems, are what really brought Brothers in Arms to the small screen.

“I love the stories we told in the games, and we do have more stories to tell, but a TV show lets us explore this subject matter and the effect on the relationships and people in broader ways,” Pitchford said in an exclusive interview with THR.

The game centers around a group of paratroopers who drop behind enemy lines during D-Day — and while you  may be thinking to yourself “I've seen that on TV already,” the series will be doing something a bit different.

According to The Hollywood Reporter, the first couple of episodes will focus on the declassified operation Exercise Tiger, which was a trial run for the invasion of Normandy that went terribly wrong.

“The story we ended up using has never been dramatized on TV,” Rosenbaum told THR. “Almost 800 U.S. servicemen were killed and it had to be covered up because the Allies were preparing for the real Normandy invasion.”

The show will follow a small squad of paratroopers on a desperate mission to rescue an Allied officer whose been taken prisoner by the Axis powers before the enemy can learn of the actual D-Day plans.

Additionally, the series will offer perspectives of combat troops, commanders, and civilians, on all sides of the war.

On the whole, I'm hopeful for Brothers in Arms, especially given the involvement of a Band of Brothers alum and the game's emphasis on realism — both technical and emotional.

However, I'd be lying if I said I didn't have concerns that basing a television show off of a video game that's inspired by real life events during World War II might be one adaptation too many.

Then again, it might not. We'll just have to wait and see when the series premieres down the road.