The premise behind Hard To Kill, a new docuseries airing Wednesdays on The Discovery Channel, is a simple one: Tim... 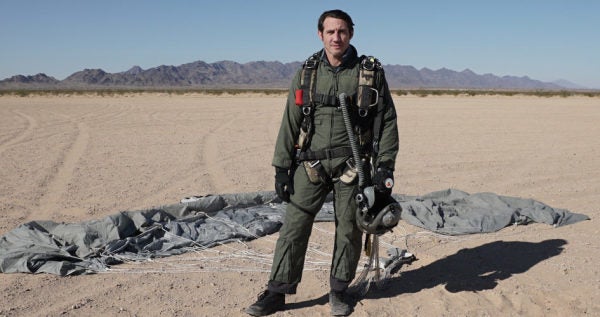 Filled with slick editing and solid camera work, the episode draws you into the dangers of the profession quickly with b-roll shots of planes crashing and exploding. To get a taste of test pilot life, Kennedy manages to hitch a ride with a certified maniac at the stick, as one of the seasoned test pilots from the Mojave, California-based Wasabi Air Racing tries to turn the muscle-bound host into a pile of high-G goo. After this, Kennedy takes a trip to good ol’ Vance Air Force Base in windy Oklahoma to hang out with the Air Force’s finest pilots who train pilots, and pull a few more Gs.

I’m a bit jealous of Kennedy; I never got an incentive ride on a T-38 Talon when I was in the Air Force. But in the Air Force’s defense, I would have thrown up all over the cockpit.

Before his military ride, Kennedy was tossed in a vacuum chamber to simulate high-altitude hypoxia. As a former Special Forces soldier, I’d imagine it wasn’t his first time in the claustrophobic ear-popping chamber, but he seems to enjoy it, so good for him. We did find out that it takes exactly 6.7 Gs to get Tim Kennedy to black out, or at least get to a commercial break.

The penultimate test of how hard it is to kill Tim Kennedy involves multicam-clad ex-operators tossing him, spinning, out of a plane with a fogged-up visor. Unlike the other two danger-clad tests, for this one Kennedy is not a passenger, but the sole participant (albeit with some backup). Luckily for us all, Green Berets are pretty schooled at jumping out of things and whatnot.

Tim Kennedy in 'Hard to Kill' after escaping a plane on fire.Courtesy of Discovery Channel

Hard to Kill is a well-made slice of reality television. Tim Kennedy does put his balls on the line, over and over again, in order to educate and entertain we, the couch-bound people of America.

For the final act, he puts himself in a burning plane. As former aircrew, the closest training I ever had to this was egressing a smoke-filled plane on the ground. A smoke egress is a walk in the park. No one ever told me to sit in a plane that was actually on fire to prep for a worst-case scenario. If that isn’t commitment to a TV show, I don’t know what is.

As far as reality shows go, Kennedy’s is worth the watch. I can’t wait to see how he dodges death next week. Stay tuned for a recap.

And below is a look at next weeks episode: Bullfighter