It’s one thing to be tough, but it’s another to be Hard to Kill — and that’s precisely what former... 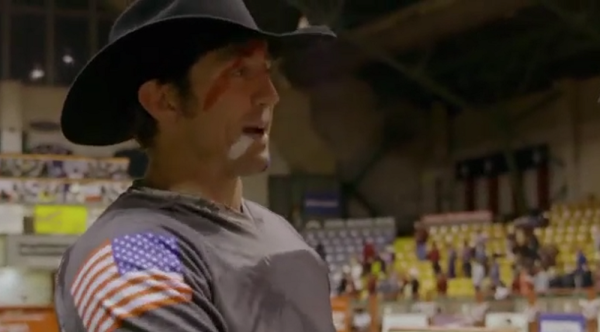 It’s one thing to be tough, but it’s another to be Hard to Kill — and that’s precisely what former UFC fighter and Army Green Beret Tim Kennedy sets out to illustrate in his new Discovery Channel docuseries by the same name.

In last night’s Hard to Kill, Kennedy tested his luck, and his reflexes, by squaring off with a 1,500-pound bull as he got a crash-course in American bullfighting from five-time World Champion bullfighter Rob Smets ahead of one of the biggest rodeo events in the country at the Cowtown Coliseum in Fort Worth, Texas.

But first, Kennedy had to make it through training — and the results were mixed. “Day one of my training just took a turn,” Kennedy narrates. “I've learned the footwork, the fake, and the step-through, but when when a live bull is charging at you, it's a whole different story.”

Not only can Tim Kennedy take a hit like a champ, he springs back up like crash test dummy come to life.Discovery Channel/Hard to Kill

Aside from demonstrating how to execute a forward roll and spring back onto your feet after being tossed through the air like a ragdoll, the goal of the August 7 episode was to provide viewers a glimpse at the incredible risks American bullfighters face when they step into the arena.

“Do not call a bullfighter a rodeo clown, because there is nothing funny about what they do,” Kennedy explains at the episode’s start. The role of a bullfighter is simple in theory, but exceedingly dangerous in practice: Their job is to hang on the periphery as a cowboy rides the bull, and as soon as he falls they spring into action, distracting the animal so the rider can get to safety. In other words: They’re human targets.

A bullfighter’s greatest fear “isn't risking their life,” Kennedy explains, “it's making a mistake that can cost a bull rider theirs.” Like all the professions that are spotlit in the adventure docuseries, this job isn’t for the faint of heart — and even for a decorated Green Beret and accomplished fighter, it’s tough.

Kennedy’s tutors, a number of professional bullfighters, are living proof as to just how risky this job is: They boast an array of old wounds, from fractured skulls, torn flesh, dislocations, broken necks, bones, and a mural of scars from angry bulls’ hooves and horns.

“There is no way you can understand just how tough a bullfighter is,” Kennedy says in the episode. “One lone man standing in the center of that ring right there is about to fight a wild animal. There's nobody who is going to save him, he's in that ring by himself.”

Hard to Kill premieres every Tuesday on Discovery Channel at 10 p.m.