The scene is a masterpiece, and one that evokes diverse, and at times divisive responses, especially among military and veteran viewers. 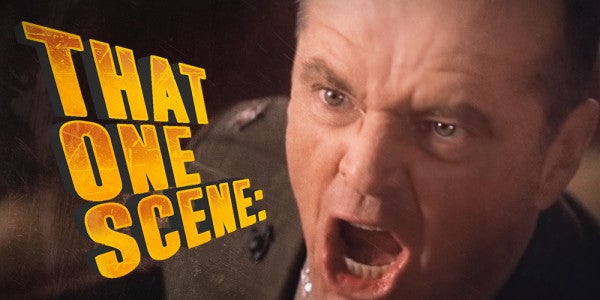 There are few one-liners more memorable than Jack Nicholson’s “You can’t handle the truth!” from the 1992 military courtroom drama A Few Good Men. In fact, the line is so quotable it actually cropped up in a real-life court case as recently as 2017. But you’re missing out if you believe the only important part of Nicholson’s two-minute tirade were those five words.

The scene is a masterpiece, and one that evokes diverse, and at times divisive responses, especially among military and veteran viewers. The debate tends to center around one question in particular: Is Nicholson’s Col. Nathan Jessup right or wrong?

In the final act of the film, Jessup, a decorated infantry officer with an illustrious career and a general’s star in his future, is called to testify in a murder trial after a Marine in his command, Pfc. “Willie” Santiago, dies while being hazed. Depending on who you ask, Jessup is either a distinguished Marine who faces a long fall from grace because he chose to handle a problem in-house, or he’s a toxic leader whose hubris has cost lives and ruined careers. Personally, I think it’s a bit of both, but damn it’s a great speech.

Related: The Darkest Moment In ‘Jaws’ Had Nothing To Do With *That* Shark »

The back and forth between Navy Lt. Daniel Kaffee (Tom Cruise) and Jessup kicks off with the iconic line “You can’t handle the truth” before Jessup charges ahead with white-hot righteous fury and glorious Marine superiority:

…You weep for Santiago and you curse the Marines. You have that luxury. You have the luxury of not knowing what I know; that Santiago’s death, while tragic, probably saved lives. And my existence, while grotesque and incomprehensible to you, saves lives. You don’t want the truth because deep down in places you don’t talk about at parties, you want me on that wall. You need me on that wall. We use words like honor, code, loyalty. We use these words as the backbone of a life spent defending something. You use them as a punchline.

The rant is a perfect mix of half-truths and hard truths. By his own actions, Jessup has undermined the virtue of those who actually live by the words “honor, code, loyalty.” He has lied to investigators, betrayed his men, ordered log books doctored to hide his tracks, and left a trail of bodies and broken careers in his wake. Santiago is dead, the two Marines responsible are facing a stretch at Fort Leavenworth and a dishonorable discharge, and Jessup’s executive officer has committed suicide, overcome by guilt for his part in the cover-up.

But Jessup isn’t all wrong. There are those who shoulder a disproportionate burden, and the risks that come with it, so that others may rest easy. If we were to just take him at his word, then there might be some merit to his claim that the underperforming Santiago, shuffled off to another unit to wait out his time before his contract is up, could potentially cost lives.

And that’s what makes it such a powerful moment: Viewers are compelled to consider a point of view they may see as overly harsh at best, or barbaric at worst, and then rationalize under what circumstances such calls might be appropriate. As Jessup is fond of reminding the audience, he’s “in the business of saving lives,” and it isn’t for the faint of heart, the weak-willed, or those who prefer to play armchair quarterback from the sidelines:

I have neither the time nor the inclination to explain myself to a man who rises and sleeps under the blanket of the very freedom that I provide, and then questions the manner in which I provide it! I would rather you just said “thank you” and went on your way, Otherwise, I suggest you pick up a weapon and stand a post. Either way, I don’t give a damn what you think you are entitled to!

It’s hard not to be swept up in the “Oorah” of it all, especially as the scene ends with a furious Marine colonel lunging at the entitled Kaffee and screaming, “You fucked with the wrong Marine!”

There’s something about Jessup that we — vets in general, but Marines in particular — are drawn to. Deep down in places we don’t talk about at parties, we want that madman on screen. We need him on screen. All bluster and bloviation, Jessup is the tough-talking and grizzled officer that hardass commanders everywhere aspire to be. He uses the ends to justify the means. He’s hard as nails and self-righteous in his fury. And whether or not we want to admit it, Jessup’s view of service is the way we, as Marines, often want to see the Corps portrayed: As a grueling crucible only the tough survive. Jessup embodies all the bullshit bravado, machismo, and “yut yut” we want the world to believe about us.

Military culture fosters the image of service as a tough and unforgiving life, and rightfully so. It can take a heavy toll, and demands extreme sacrifice, the likes of which most people simply can’t understand, or accept.

In Jessup’s tirade, we get vindication: It’s a statement of purpose — the “why” behind all the hardship, bullshit rules, brutal conditions, tours to exotic locations with too much sand, too little water, and most importantly, the incredible risks that come with uniformed service. But that’s not an excuse to discard the values we purport to uphold, as Jessup does by covering up the scandal and railroading his men when the ends fail to justify the means.

Though we can’t separate the words from the man who delivers them, the lingering appeal of the speech in our culture suggests that maybe it doesn’t matter whether Jessup is the hero or the villain of the story. What matters, especially to the Marines who watch it, is that he’s the Marine.