Rep. Steve King was tricked into thanking Marine Col Jessup from ‘A Few Good Men’ for his service 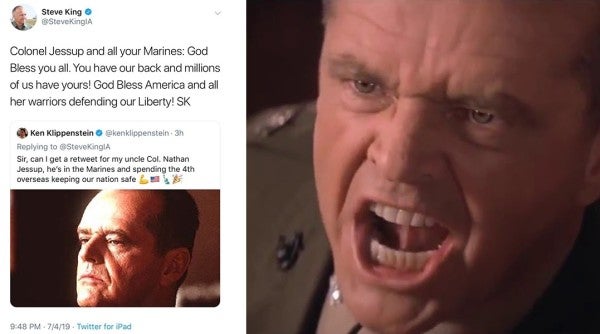 On July 4, Rep. Steve King (R-Iowa) took to Twitter to thank a Marine colonel and his brave troops for their steadfast service to America. Then, King spent the rest of that day (and the next) being mercilessly mocked online.

You recognize him, don't you? No, not the Congressman from Iowa who's largely characterized in news stories as “a firebrand” who “courted controversy” with his comments on race, immigration, and white supremacy. We're talking about the other guy: Col. Jessup. Or, to use his full name Col. Nathan R. Jessup. Or to go a step further for the sake of accuracy: Jack Nicholson, from A Few Good Men.

That's right, a sitting U.S. Congressman got trolled into retweeting a boilerplate “thank you for your service” post to a fictional character (and the principal villain) in an iconic 1992 military drama.

And that's not all. After Ken Klippenstein, a reporter with The Young Turks saw that King had shared his tweet with a reply of his own, Klippenstein promptly changed his Twitter handle to “Steve King is a white supremacist” which appeared on King's page for a while, until the Congressman (or a horrified staffer) realized what was going on, and deleted the posts. By then, it was too little too late:

When asked why Klippenstein targeted King for his L-shaped Twitter ambush, he told Task & Purpose that “I tweeted it out of frustration with congresspeople like Rep. King who refuse to adequately fund the VA but are more than happy to pander to the troops in completely vacuous ways,” Klippenstein said via email. “Veterans deserve better.”

Perhaps the most entertaining part of this Twitter drama — other than seeing an elected official teased for a bumper-sticker-style “TYFYS” tweet — is that King fell for the same exact trap that Col. Jessup did in A Few Good Men: He was goaded into saying something outrageous, and left there embarrassed and exposed.

For those of you, like King, who haven't watched the movie, the 1990's military drama follows Tom Cruise and Demi Moore as Navy lawyers who mount a case to prove that Jack Nicholson's hard-nosed Marine colonel had a hand in the hazing death of one of the men under his command. In the film's final act, Cruise's Lt. Kaffee baits Col. Jessup into admitting guilt, at which point he is promptly arrested.

While King's Twitter misfire isn't nearly as serious, it does seem like the Congressman can't handle the truth, considering that he deleted the tweets, and blocked Klippenstein.

King's representatives could not be reached for comment on Friday.