They fought against each other in Iraq. A decade later, they met for tea 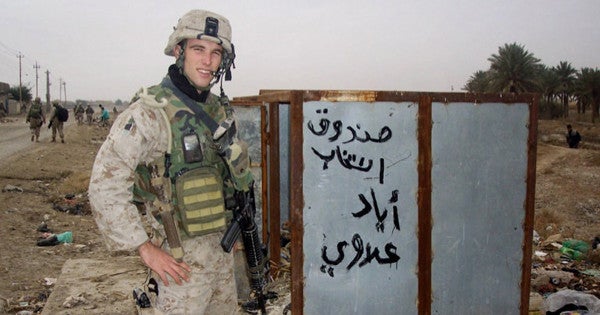 In November 2013, I was traveling in and out of southern Turkey. I'd come there for a number of reasons but most fundamentally to understand how the wars I'd fought in Iraq and Afghanistan were echoing out into the current revolution in Syria.

One evening, a friend of mine named Abed, who worked for a humanitarian aid organization and himself had been a democratic activist in the Syrian revolution, told me he'd met someone in a refugee camp who “he really thought I should meet.” He explained that the man's name was Abu Hassar, that he'd fought for al-Qaeda in Iraq, and that he thought the two of us “would really get along.”

Ten years later, on that day in 2013, I wanted to meet my partner, this person who had so defined me. Meeting Abu Hassar was a gamble, because I was betting that my fascination with him would prove equal to his fascination with me.

The below is an excerpt of our conversation from Places and Names: On War, Revolution, and Returning.

“I have something to ask you,” he says, changing the subject. “With all your warplanes, and your aircraft carriers, and tanks, and your laser-guided bombs, with all this—”

I interrupt him. “I think I know your question.”

Abu Hassar shakes his head. “With all these things, how is it that you couldn't win in Iraq?”

“The type of war we chose was complicated,” I say. “We'd lost be­fore we even started fighting. For us, success meant winning. For you, the insurgents, success meant not losing. Those are two very different things.”

Abu Hassar looks at me as if I am trying to take something from him, as if my analysis robs him of some honors of combat. “We defeated you with nothing,” he says. “With explosives in plastic jugs on the road­ side and old rifles. Imagine if we'd had your tanks or your planes.”

“The Afghan insurgents say, 'You Americans have the watches, but we have the time.' It's the same here. That's why you won.”

Abu Hassar's face tenses, his eyebrows nearly touching, as if un­ able to understand what I am talking about: Watches and time? Who has which? “Just imagine if we had weapons like yours now. Assad would be dead within a few weeks. If Obama armed the Islamists, he wouldn't have to worry about Putin and Khamenei's games.”

Right in his face, I laugh.

“You think it's funny, but it's the truth,” says Abu Hassar.

It has often been said that the test of a first-rate intelligence is the ability to hold two opposing ideas in thought at the same time while still retaining the ability to function. Based on that criteria, the way most Syrian jihadists and activists think about the United States makes them some of the most intelligent people I've ever met. Like most in the Arab world, they are deeply suspicious of American interventions in the region—the invasion of Iraq was criminal to them. But held in opposition to this outrage, those same voices now clamor for a similar intervention in Syria.

“And why shouldn't you arm the Islamists? You know firsthand what good fighters we are,” says Abu Hassar. From ear to ear, he grins at me.

He is egging me on, as if he's outfoxed me at a game of checkers and wishes to hustle another round. “No one would accept this idea,” I say. “It'd be rejected outright. You're not being serious.”

“I don't think we jihadists would have a problem receiving our weapons from the US,” he replies.

“It's we Americans who would never accept it! We were fighting each other just two years ago in Iraq.”

Now it is Abu Hassar who laughs right in my face. “For your government, it's no worse a position than the one they're in now. We used to be friends, remember—in Afghanistan, in the eighties. If we went from being allies to enemies, that means we can go from being enemies to allies.”

“Okay, so how does that end?” I ask. “My government arms the Islamists. Tell me how that ends.”

“You really want to know?”

“The Prophet predicted all of this,” begins Abu Hassar, as if from some place of deep personal knowledge. “He said it starts with the boys, writing and speaking messages of a new future in the streets.” Abu Hassar stops and looks at Abed for a moment. By that look, it seems Abed and the Arab Spring's democratic activists were the boys Abu Hassar refers to. “The messages spread, breeding outrage and a war fought by the men. This is what we see now. In that war, an Islamist army rises, uniting to destroy all others. Then a tyrant is killed. This is Assad. His army will fall. Afterward, among the Islamists, there will be many pretenders. The fighting among them will go on.”

Abu Hassar glances at my notepad. I haven't been writing anything down. This seems to bother him. “You know all this?” he asks.

“It's all happening right now,” I say. “The infighting, the rise of the Islamists. How does that end?”

“After so much war, they want justice. After Assad falls and when there is fighting among the pretenders, a man will come. He is a common man, but he will have a vision. In that vision, God will tell him how to destroy His enemies and bring peace to all peoples. That man is the Mahdi.”

I write down the word Mahdi, a heavy and dissatisfied dot above the i.

I stare back at him, saying nothing.

“You think, as poorly armed as we are, we can't defeat Assad and his backers?”

The author in Afghanistan (left), while serving as a Marine special operations officer.Courtesy of Elliot Ackerman

Abu Hassar continues. “Our weapons don't matter as much as you think. Even Albert Einstein predicted what's happening now. He said that the Third War would be a nuclear war, but that the Fourth War would be fought with sticks and stones. That's how we beat you in Iraq: with sticks and stones. Whether we are helped or not, this is how we will create our Islamic state, even with the superpowers of the world against us.”

“So the plan is to wait for the Mahdi?”

“He walks among us now, a simple man of the people, the true redeemer.”

I shut my notebook. Our waiter is lurking across the room. I catch his eye and make a motion with my hand, as if I am scribbling out the bill for our lunch. He disappears into the back of the restaurant.

“What will you do if this is true?” Abu Hassar asks me. “If the Mahdi returns?”

“That means there will be a peaceful and just Islamic state?”

“Then I'll come visit you with my family.”

“And you will be welcome,” says Abu Hassar, grinning his wide, ear­ to ­ear grin and resting his heavy hand on my shoulder.

We've been sitting for hours, and it is early afternoon. Abu Hassar excuses himself to take the day's fourth prayer in a quiet corner of the restaurant. Abed, seemingly exhausted from translating, stands stiffly and goes to use the bathroom. I sit by myself, the empty plates of our lunch spread in front of me.

Our waiter wanders over. “Syrie?” he asks, pointing to where Abu Hassar and Abed had been sitting.

Then he strokes his face as if he has a thick and imaginary beard, one like Abu Hassar's. “Jabhat al­ Nusra,” he says.

“Amerikee?” he asks, pointing at me, seemingly confused as to why an American would spend so much time sitting with two Syrians, especially one Islamist.

He shakes his head knowingly, as if to intone the words New York is to intone a universal spirit of anything goes.

I hand over the money for lunch. Abed and Abu Hassar return and we leave the restaurant. Outside, the gray morning rain is now gray afternoon rain. The cafés are still full of people sitting on green Astro­ turf lawns, sipping tea that steams at their lips. Nothing has changed.

We pile into the black Peugeot and return to the road. For a while, we don't speak. We are tired of our own voices. There is just the noise of the broken wiper in front of me, stuttering across the windshield. Above us, the overcast sky loses its light. Below, Akçakale camp spreads in all directions, as gray as a second sky. Something heavy and sad comes over Abu Hassar, and the heaviness of that thing comes over me. He and I have spent the day somewhere else, in a different time. Now he'll go back to the camp and I'll go back to the road.

But we aren't there yet. With about a mile left to go, Abu Hassar puts his hand on my shoulder. “So you will come visit when the war is over?”

“It would have to be. You would never pass for a Muslim.” He points at me and speaks to Abed: “He is such a Christian, he even looks like Jesus!”

I glance at myself in the rearview mirror. I haven't shaved in a couple of weeks. My face is a bit gaunt, my kinked hair a bit unkempt. “Maybe I look like Einstein?”

As we pull over by his brother's shop, Abu Hassar and I are still laughing.

He opens his door and a cold breeze fills our car. I can feel the rain outside hitting my neck. Abu Hassar grabs my shoulder with his thick and powerful hands. He pushes his face close to mine. Again he is grinning. “I look like the Mahdi.”