15 years after her Blackhawk was shot down, Tammy Duckworth finds an Iraq ‘on the precipice’

Duckworth — a former Army Lt. Col. and Blackhawk pilot, and current Democratic senator from Illinois — was shot down in Iraq in 2004. When she woke up, she'd lost both of her legs. 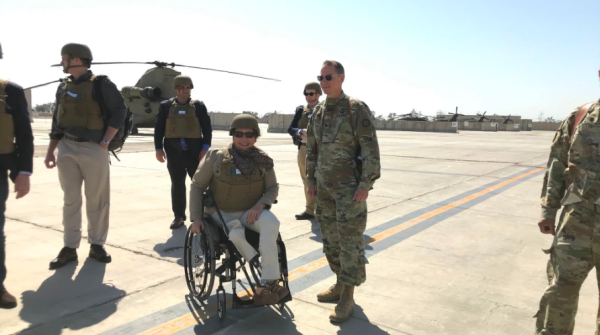 Tammy Duckworth used to be angry. And you'd be hard-pressed to find a single person who would blame her.

Duckworth — a former Army Lt. Col. and Blackhawk pilot, and current Democratic senator from Illinois — was shot down in Iraq in 2004. When she woke up, she'd lost both of her legs.

“I had a lot of anger the first few weeks out there, right after I woke up in the hospital — I wanted to go back and find that bastard who shot me down, and hunt him down and kill him,” she told reporters on Wednesday. “But I moved on from that years ago.”

It's never been anger towards Iraq, she said. She wants Iraq to thrive, to be “not beholden to anyone, whether it's the U.S. or Russia or Iran.” So she was worried when she traveled back to the country with Sens. Johnny Isakson (R-GA) and Angus King (I-ME) 15 years after her crash, and found it, as she put it, “on the precipice.”

Took this photo in Iraq last week: @SenDuckworth looking down as the helicopter taking us to Taji circled the spot where she was shot down 15 years ago while piloting her Blackhawk. This is a picture of courage, commitment and grit – I've got a new hero. https://t.co/khefRsOA0i pic.twitter.com/pmbh1kwPGr

While ISIS doesn't hold any more territory, they're “very much everywhere,” she said, just “waiting for the right conditions.” And Iraqi officials don't have a plan in place for dealing with “the most hardcore” women and children coming back to Iraq — of which she says there are 30,000 — other than putting them in camps. Duckworth also said that she learned ISIS fighters are going into displaced person's camps and holding the aforementioned women and children, and while Iraqi officials are aware of it, there isn't much they can do.

“The Iraqis have no plan for what to do with these people,” Duckworth said. “No plan to reintegrate them, no plan to forgive them, no plan to work with communities to take these women and children back into the communities. Essentially you're creating internment camps for kids who are already spouting ISIS propaganda, and are just going to get further indoctrinated.”

As for the U.S. role in Iraq, she said military leaders on the ground described it to her as the U.S. being a rebar for the coalition forces — “The structure is strong, it's helping Iraqis, but if that rebar is gone the concrete crumbles.” But she said one of Iraq's biggest fears is that the U.S. uses Iraq as the battleground for a fight with Iran.

That concern isn't baseless. President Trump said at the beginning of this year that he wants to pull U.S. troops to stay in Iraq to “watch Iran.”

“One of the things the Iraqis said constantly was 'We do not want to be the next battleground between a war between the United States and Iran.' I heard that from all three of their leaders. And I said, 'I don't want that either,'” said Duckworth, who has been a very vocal proponent of updating the 2001 Authorization for Use of Military Force. “But they do believe that's what this White House is leading us towards … that's the fear on the ground.”

When she spoke with Iraqi leadership, Duckworth said she reaffirmed her commitment that Iraq will become a “successful, strong, independent nation,” and “the best ally the United States could possibly have.” Ultimately, she wants Iraq to be somewhere that she can bring her daughters back to visit.

“Iraqis spilled blood to save Baghdad from ISIS, and Iraqis have fought for this country,” Duckworth says she told Iraqi President Barham Salih. “But remember that I spilled my blood here, too.”