"Some people say it's mechanical," said President Trump. "I personally don't think that's even a question." 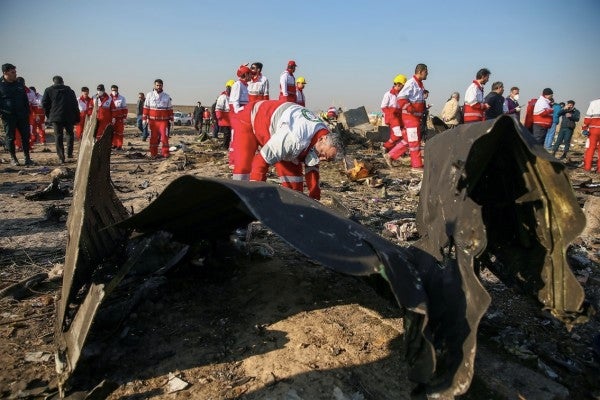 US officials are confident that Iran shot down a Ukrainian jetliner in the hours after an Iranian missile attack on Al-Asad Air Base, according to reports from Newsweek and CBS News.

The jetliner crash killed 176 people, including at least 63 Canadians.

The information is based on US intelligence, said CBS anchor Major Garrett, which sources say “picked up signals of radar being turned on. US satellites also detected, we are told, two missile launches which happened shortly before the plane exploded.”

The Pentagon did not have any information about the issue when asked by Task & Purpose soon after the Newsweek story broke.

President Donald Trump said during a speech at the White House on Thursday that the crash could have been caused by “a mistake on the other side.”

“It's a tragic thing. But somebody could've made a mistake on the other side. … not our system,” Trump said. “It has nothing to do with us. Some people say it's mechanical. I personally don't think that's even a question.”

“I have a feeling that something very terrible happened,” he added.

The Wall Street Journal reported that a U.S. official familiar with the matter said Wednesday that data transmitted via satellite indicated everything was normal on the jetliner until the sudden loss of data and the fatal dive. That data suggest to some U.S. air-safety officials that there may have been some sort of hostile act, said the person, who also cautioned that it was too early to draw conclusions.

However, The Wall Street Journal also reported that Iranian officials, quoted by the state news agency, said the plane had suffered a technical fault, that it had started to turn back in the direction of Tehran airport and was already on fire before it hit the ground. They said the jet had reached 8,000 feet before disappearing from radar Wednesday.

“Since the Ukrainian pilot was trying to return to the airport, a rocket, missile strike or the country's defense system is out of question,” said Hassan Rezaifar, head of Iran's Civil Aviation Organization commission for accidents investigation, quoted by Iran's state news agency, according to The Wall Street Journal. “No missile part was found in the crash scene.”

This is a breaking news story. It will be updated.