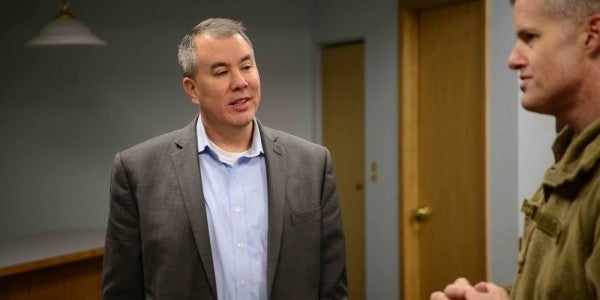 The No. 3 official at the Pentagon has been fired, a defense official confirmed on Wednesday.

CNN first reported that Undersecretary of Defense for Policy John Rood had been asked to resign.

No information was immediately available about why Rood was fired.

“It is my understanding from Secretary Esper that you requested my resignation from serving as Under Secretary of Defense for policy,” Rood in his resignation letter to President Donald Trump, which was obtained by Task & Purpose. “Senior administration officials appointed by the President serve at the pleasure of the President, and therefore, as you have requested, I am providing my resignation effective February 28, 2020.”

Trump wished Rood all the best on Wednesday when he tweeted: “I would like to thank John Rood for his service to our Country, and wish him well in his future endeavors!”

I would like to thank John Rood for his service to our Country, and wish him well in his future endeavors! https://t.co/kPA1rYCKvp

Rood is perhaps best known for sending a letter to Congress in May 2019 in which he certified that Ukraine had made enough progress fighting corruption to allow the Defense Department to provide the Ukrainian government with a $250 million military assistance package.

Trump was later acquitted by the Senate of allegations that he froze the aid to pressure Ukraine to investigate his political rival former Vice President Joe Biden.

Pentagon spokesman Jonathan Hoffman declined to say exactly why Rood was asked to resign, saying Rood's letter speaks for itself.

When asked specifically if Rood's departure was connected to his role certifying the military aid package to Ukraine, Hoffman said it would be “speculative” to draw such a connection.

“I have no information that would lead me to that conclusion,” Hoffman said during a Pentagon news conference.

In December, Lara Seligman of Foreign Policy reported that Rood was allegedly abusive to his subordinates, prompting some defense officials to resign. At the time, Hoffman said that Rood had “demonstrated effective and constant leadership” during his two years in the job.

“We have the utmost confidence in Under Secretary John Rood's expertise and professionalism,” Hoffman said.

“John has played a critical role on a wide range of DoD issues including modernizing our nuclear deterrence capability, efforts to increase burden sharing by our NATO allies, our missile defense review and implementing the National Defense Strategy,” Esper said in the statement. “I wish him all the best in his future endeavors.”