The U.S. military is effectively being held together by chewing gum and rubber bands. 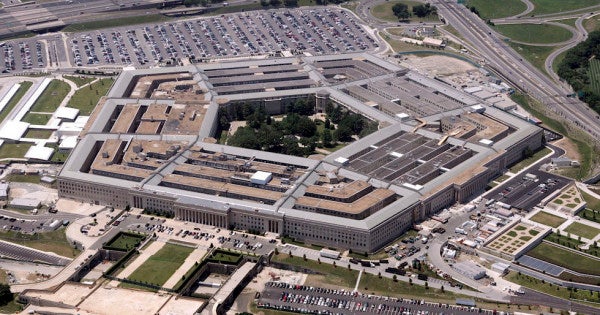 Never has the cliché “rearranging deck chairs on the Titanic” been better used than to describe the staffing issues at the Pentagon, where org charts now resemble Twister mats.

Of the Defense Department’s top 60 leadership positions, a total of 20 are currently vacant, said Pentagon spokesman Chuck Prichard. Ten people have been nominated for some of those positions but the Senate has not scheduled their confirmation hearings. The White House has not nominated anyone to fill the remainder of the open positions.

The Defense Department has procedures in place so that work can continue in offices that have vacancies, said Pritchard, who also noted that Congress has increased the overall number of Senate-confirmed positions from 55 to 60 since 2017, and that has contributed to the number of open slots.

While attrition is normal toward the end of a president’s first term, President Donald Trump’s ongoing loyalty purge has exacerbated the higher number of vacancies in top Pentagon leadership positions – a long-standing problem that has plagued the Defense Department under the current commander in chief’s tenure.

The issue now is that even defense officials who were temporarily filling vacant positions are also leaving. The Pentagon isn’t sending the backup team into the game anymore. They are using the backups to their backups.

The Pentagon has gone topless

The U.S. military is effectively being held together by chewing gum and rubber bands.

Imagine musical chairs in reverse: There are too many seats and too few people. That is why Thomas Harker is “performing the duties of” the Pentagon’s comptroller while also serving as the Navy’s comptroller. Harker replaced Elaine McCusker, who resigned as the Defense Department’s acting comptroller in June.

McCusker had served in the position on a temporary basis since August 2017 and she had originally been expected to become the next permanent comptroller, but the White House yanked her nomination in March. The New York Post had first revealed that McCusker would not get the comptroller’s job because she had raised red flags about Trump’s freeze on a military aid package to Ukraine.

That would allow the White House to circumvent Senate confirmation hearings, which could be particularly brutal for Army Brig. Gen. Anthony Tata, who has been nominated as the undersecretary of defense for policy, Politico reported.

Tata is a Fox News contributor who once tweeted that former President Barack Obama was a terrorist leader and made other Islamophobic comments, CNN first revealed, He also left the Army in 2008 after an investigation determined he had committed adultery with at least two women and fathered a son out of wedlock while in uniform, the Raleigh News & Observer reported.

The process of using Trump loyalists to fill Pentagon leadership positions temporarily is well under way. On July 10, Michael Kratsios, who is still serving as the White House’s chief technology office, was named acting undersecretary of defense for research and engineering.

Kratsios does not have a background in basic science or engineering, according to Defense One. He holds a bachelor’s degree in political science with an emphasis on ancient Greek democracy.

Kratsios is known as an effective White House operator who has advanced the president’s agenda on artificial intelligence and 5G, a former defense official told Task & Purpose.

Who’s in charge of special operations?

The revolving door has not helped the Defense Department’s efforts to increase civilian oversight of special operations forces by expanding the responsibilities of the assistant secretary of defense for special operations and low intensity conflict, as required by Congress three years ago.

A May 2019 Government Accountability report determined the Pentagon had no timeline to implement many of the necessary changes and the guidance about the responsibilities for the Pentagon’s top civilian official in charge of special operations was “outdated.”

But the Pentagon has not had a permanent assistant secretary of defense for special operations and low-intensity conflict since Owen West resigned in June 2019.

Christopher Miller is the latest of three officials who have taken the job on a temporary basis over the past year. Complicating matters: Miller has also been nominated to become the director of National Counterterrorism Center.

Related: Lawmakers warned the Pentagon about US special operations forces vacancies the same day the official overseeing them resigned

Without a permanent Defense Department civilian in charge of the special operations community, both special operations commanders and several defense secretaries have been unwilling to implement the changes mandated by Congress, a retired military officer who has served in various positions at the Pentagon and White House told Task & Purpose.

Even when West held the job, U.S. Special Operations Command was reluctant to take direction from his office, said the former White House and Pentagon official, who spoke on condition of anonymity due to the sensitivity of the issues

Since West stepped down, Defense Secretary Mark Esper has not yet given any of his replacements the power needed to fulfill their oversight roles, the former official said.

“As a consequence, nobody at SOCOM is going to take direction from somebody who is simply ‘performing the duties of,’” the former official said. “They may cooperate when they want to and when they think it’s in their interests.”

But without a permanent civilian official overseeing special operations in place, the head of Special Operations Command doesn’t always have to do what he’s told, the former official said.

“He’s going to say: ‘I’m a combatant commander; I work for the secretary. I don’t have to listen to you,’” the former official said.

However, Army Gen. Richard Clarke, the head of Special Operations Command, disputed any notion that he is reluctant to take orders from a civilian leader within the Defense Department.

“I have always strongly believed that civilian leadership of the military is necessary and critical, and my time on the Joint Staff and as the commander of USSOCOM has further reinforced that conviction,” Clarke said in a statement to Task & Purpose.

“I follow the guidance and direction of Secretary Esper, as well as his deputy, undersecretaries, and assistant secretaries. I fully acknowledge the roles, responsibilities, and authorities of the ASD(SO/LIC) and have and will continue to maintain coordination with and respect for that office, be it filled by an acting or confirmed official.”

Not all military commanders may feel that way.

Having so many leadership positions filled on a temporary basis by officials who have not been confirmed by the Senate certainly does not help the Defense Department to implement the president’s policies, the former Pentagon official told Task & Purpose.

“If you are just temporarily holding the seat until a permanent person comes along, the bureaucracy doesn’t really respect you,” the former official said. “A lot of things that are important don’t really get done. Our daily military operations continue unabated but the larger policy decisions, particularly if it’s controversial, don’t get a full consideration.”