'This is just an effort to protect sensitive information.' 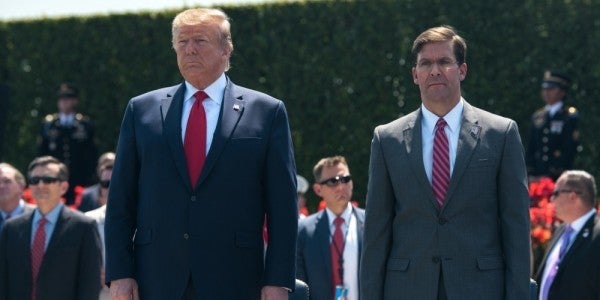 In an effort to crackdown on leaks, the Pentagon is trying to limit the release of unclassified information in the name of operational security.

This latest move comes after President Donald Trump and his administration received unflattering news coverage about its lackluster response to intelligence reports indicating the Russians may have offered money to Taliban-linked militants to kill U.S. troops in Afghanistan.

In a July 20 memo, Defense Secretary Mark Esper stressed that “unclassified information is not publicly releasable until it is approved for release by an appropriate authorizing official.”

“Poor OPSEC practices within DoD in the past have resulted in the unauthorized disclosure or ‘leaks’ of controlled unclassified information (CUI), including information to be safeguarded under the CUI category for OPSEC, as well as classified national security information (together referred to here as ‘non-public information’),” Esper wrote in the memo.

Separately, Esper signed another July 20 memo that requires all engagements between military officials and reporters — even off-the-record discussions — to be coordinated with Defense Department public affairs.

During a Tuesday news briefing, Pentagon spokesman Jonathan Hoffman insisted that neither memo was meant to restrict the media’s access to information.

However, former Defense Secretary Mattis also imposed limitations on the public release of unclassified information, including figures about military readiness, and then-Chief of Naval Operations Adm. John Richardson followed suit by ordering commanders to avoid “giving away our competitive edge by sharing too much information publicly.”

Related: Actor Gerard Butler Has Given More Pentagon Briefings In The Past 5 Months Than The DoD's Spokeswoman

The Defense Department’s latest efforts to curtail access to information was expected after Esper told lawmakers on July 9 that the Pentagon had launched an investigation into unauthorized leaks to the media of both classified and unclassified information.

The issue came up as several Republican members of the House Armed Services Committee attempted to minimize media reports about the alleged bounties offered by Russian military intelligence on U.S. troops.

During the hearing, Rep. Elise Stefanik (R-N.Y.) referred to the Russian bounties issue as “an illegal leak that has been covered by the media” and then asked Esper to discuss “the damage that illegal leaks have on our ability to collect intelligence, on force protection measures.”

“The illegal leaks are terrible and they’re happening across the government, particularly in the Defense Department,” Esper replied.

“I am pushing forward on a new effort to remind people of OPSEC, whether it’s pre-decisional unclassified items or even classified items. It hurts our national security. It jeopardizes our troops. It is just damaging to our government and our relationships with our allies and partners.”

However, Rep. Seth Moulton (D-Mass.), a Marine veteran, pushed back on the notion that the Defense Department needs to launch a crackdown on leaks amid stories about the alleged Russian bounties.

“I don’t think you get to pick and choose which leaks you like, which leaks aren’t damaging vs. what is an OPSEC problem,” Moulton told Esper. “This White House routinely uses leaks to their advantage, but suddenly it’s a problem for their apologists.”

Related: The Pentagon thinks it doesn't need to talk to the press. Here's why they're wrong.