The U.S. Air Force needs a little bit of time to get its shit together, so journalists, if you could... 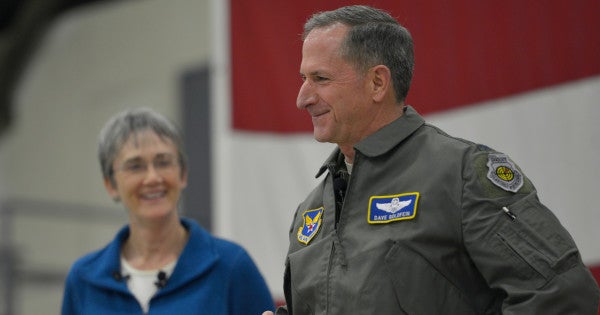 The U.S. Air Force needs a little bit of time to get its shit together, so journalists, if you could just do us a favor and stop asking us questions for like, a week or maybe a month or two, that would be great. Thanks.

That's the non-fluffy version of a quiet change in the Air Force recently revealed by Defense News, which reported the service was putting a freeze on interviews, base visits, and media embeds “until further notice” as it begins a retraining effort for the service's public affairs staff.

The Air Force says it needs to get its spokesmen to stop revealing juicy tidbits to the media that could be harmful to operational security. So naturally, the “for official use only” guidance memo, dated March 1, was leaked to the press.

“This is a total force effort to improve our operational security communications in line with the Secretary and Chief of Staff of the Air Force's operational security memorandum sent in February 2018,” the memo reads. “As this transition occurs, the Air Force will temporarily limit the number and type of public engagements tied to operations and readiness while training to provided to commanders, public affairs professionals, and Airmen representing the Air Force.”

In other words, we need to break out the PowerPoint slides, ladies and gents.

According to the memo, any and all personnel down to the wing level that may interact with the media need to go through PowerPoint hell before they can even think about talking to a reporter, lest they reveal to the enemy that we inspect parachutes or stand alongside our allies.

During this time, reporters trying to write up even benign human-interest stories highlighting an airman on an honor guard or a base veterinary clinic would need to pound sand until a four-star general signs off.

Still, the memo does talk through some of the potentially sensitive areas that should be avoided when speaking to reporters, to include classified information (obviously), vulnerabilities, deployment schedules, and specific details on numbers, locations, and capabilities of Air Force assets.

Reading this, however, makes me wonder why this is even necessary.

I've talked with countless military public affairs professionals in my time as a reporter, and just about every time you call them up, they give you something in between jack and shit in response to your questions.

But according to the Air Force, there have been some instances where OpSec issues have come up when dealing with the press. One example slide that was leaked on Facebook (lol) said a unit identified the National Space Defense Center at Colorado's Schriever Air Force Base as a “hub of critical data” to The Gazette, which in turn tells adversaries that it's a potential “national center of gravity.”

This just in: I have just learned that the Pentagon in Washington, D.C. and the National Security Agency headquarters in Fort Meade, Md. are also considered national centers of gravity. And you know what, I'm not even sorry that I just revealed incredibly sensitive information to the Russians and Chinese.

In reality, it's pretty rare to see military public affairs officials actually give journalists worthwhile information for a story — at least, on the record. They are Defense Information School-trained in the art of deflection and offering non-answers, for the most part.

Nine times out of ten in military reporting, you get something interesting from a background or anonymous source and then call the service up for the obligatory declined to comment response.

But if you happen to know any public affairs officials willing to go on record with some sensitive shit, please let me know.