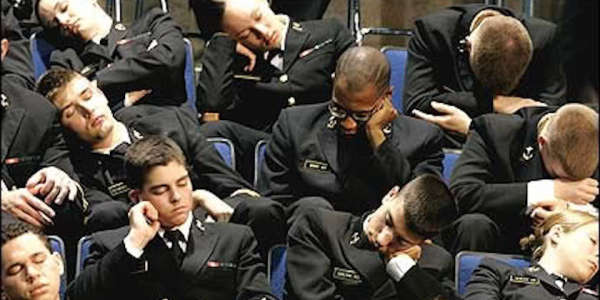 The Air Force Office of Special Investigations, the branch’s chief investigative and protective service and a central organ of counterintelligence activities for the federal government, appeared to authorize warrantless domestic surveillance of U.S. persons even without a “specific connection” to foreign terrorism, thanks to a 2016 update to a DoD directive governing intelligence collection activities. That revelation came earlier this month, thanks to a Freedom of Information Act request from Human Rights Watch, and it sent privacy advocates into a shitfit: Why is the DoD so wantonly trampling on private citizens’ Fourth Amendment rights?

Don’t sweat it: Nothing’s actually changed. “‘Homegrown violent extremists’ is a colloquial term that is not used in the official policy,’” Army Maj. Audricia Harris, a spokesman for the Office of the Secretary of Defense, told Task & Purpose. “Nothing in this directive alters policies governing domestic surveillance.”

And according to the OSD, you can blame the misunderstanding on that scourge of senior NCOs everywhere: PowerPoint.

Here’s what happened: On Oct. 25, Human Rights Watch published 2016 training slides from the Air Force Office of Special Investigations that appeared to detail an update to a 35-year-old DoD directive that governs U.S. intelligence activities. The slides stated that AFOSI could conduct surveillance of so-called “homegrown violent extremists” when “no specific connection to foreign terrorist(s) has been established.” Since the AFOSI slides were based on the DoD directive, HRW concluded that the latter would “ to authorize warrantless monitoring of U.S. citizens and green-card holders whom the executive branch regards as ‘homegrown violent extremists’” — a slippery, dangerous slope for any government.

Seem complicated? It is! And in an effort to distill the new DoD guidelines for domestic surveillance down to bite-sized morsels of police goodness for all those eager AFOSI analysts, some poor schmuck gravely misinterpreted the new updates stipulated in the 2016 directive.

The “homegrown violent extremists” phrase “was used in a training slide to help explain a procedure from DoD Manual 5240.01, paragraph 3.2.c.(4)(c) that applies exclusively to the CI elements of the military services,” Harris, the OSD spokeswoman, added. “As a result of feedback from our review, AFOSI has adjusted the training slides to more precisely reflect guidance from the manual.”

Indeed, the AFOSI slide that sent privacy advocates into a tizzy appears to have no basis in reality. The 2016 update to DoD Directive 5240.01 that supposedly opened the floodgates for wanton domestic surveillance by Pentagon analysts doesn’t contain the broad category of “homegrown violent extremists,” nor does it authorize surveillance with “no specific connection” to a foreign terror group. The directive instead stipulates that DoD intelligence operations can only intentionally gather information on U.S. persons who are “reasonably believed” to be employees of, acting on behalf of groups “directly or indirectly owned or controlled by,” or planning an imminent act of international terror on behalf of foreign powers.

Related: PowerPoint Doesn’t Make Us Stupid, We Make Ourselves Stupid »

“In order to intentionally collect U.S. person information using the procedure in DoD Manual 5240.01, paragraph 3.2.c.(4)(c), there must be a reasonable belief that … the U.S. person is an individual, organization, or group acting for, or in furtherance of, the goals or objectives of an international terrorist or international terrorist organization, for purposes harmful to the national security of the United States,” Harris told Task & Purpose.

While the slides at the core of the Human Rights Watch docublast may not be as nefarious as they seem — the AFOSI slides appear to single out potential Islamic terror threats, clearly referencing the 2015 San Bernadino and 2016 Orlando mass shootings by ISIS-inspired perpetrators as examples of “homegrown violent extremism” — the concerns are still warranted.

It took the NSA nearly four years after the 2013 disclosures by former contractor (and Army Special Forces training washout) Edward Snowden to finally back off some of its warrantless wiretapping activities, and the Trump administration in recent months has been loathe to allow lawmakers to enact new restrictions on how the U.S. goes about keeping tabs on domestic terror threats. To paraphrase Thomas Charlton in his 1809 biography of Major General James Jackson, the price of liberty is absolutely eternal vigilance. In that light, Human Rights Watch is doing exactly what it should.

At the same time, it’s almost more depressing to imagine the government carrying out a prolonged campaign of unconstitutional domestic surveillance due to poor phrasing on a training slide. Absolute power may corrupt absolutely, but it’s PowerPoint, not power, is the biggest threat to liberty and freedom in American history.

You can read the entire AFOSI PowerPoint presentation below: