"I didn’t realize the importance of physical fitness for fighting G-LOC." 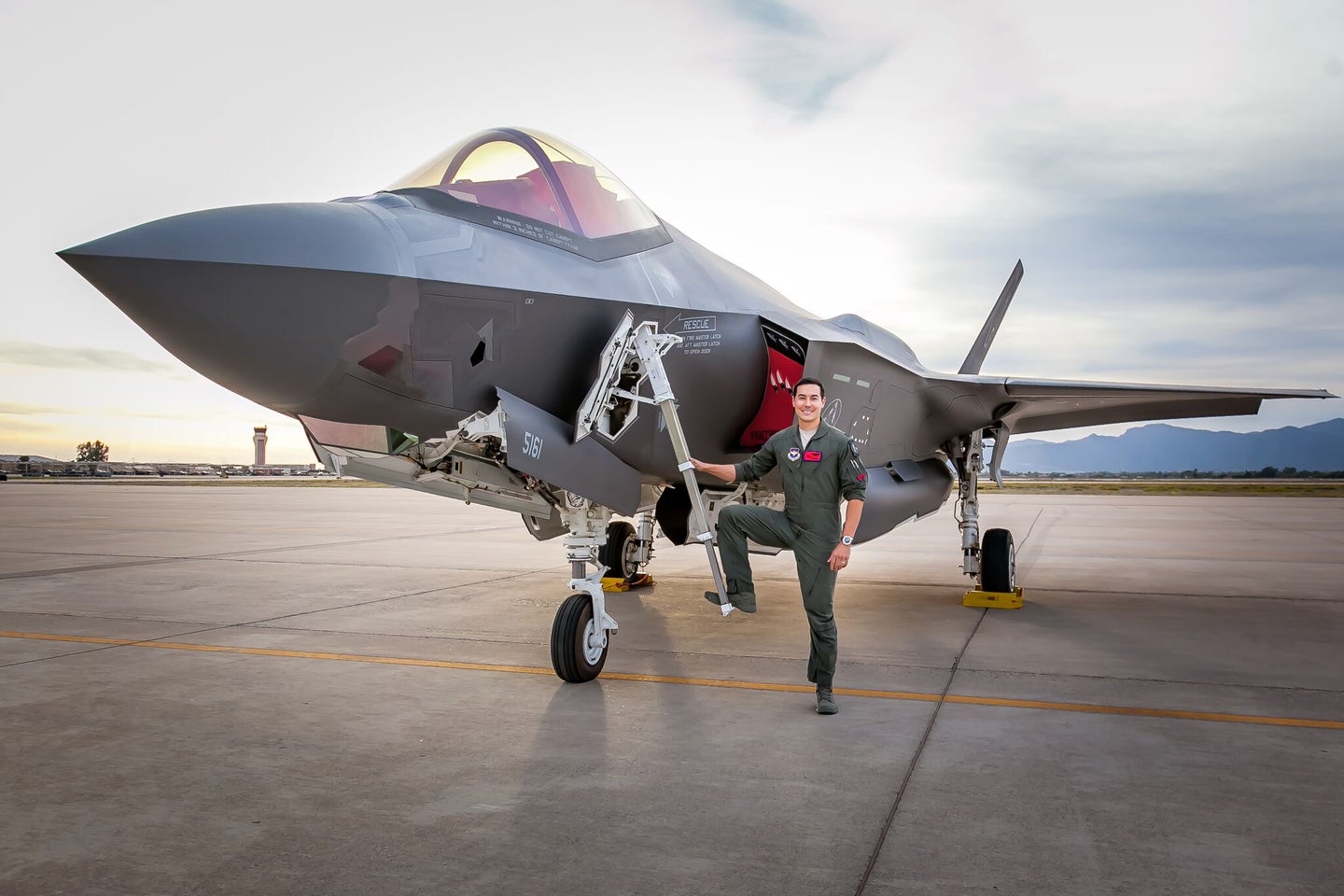 Everybody knows fighter pilots are pretty cool: they fly supersonic jets, drop explosive ordnance, and wear awesome sunglasses. But pilots are human too, and sometimes flying a fighter jet is less like Ace Combat 7 and more like a long road trip at 30,000 feet.

Unlike a long car ride, there are no rest stops to stretch and get a Big Mac. So how do you stay alert, comfortable and healthy while flying a multi-million dollar jet armed with explodey bits? And when the bullets start flying, how do you deal with the strain of G-force? F-35 instructor pilot Maj. Justin “Hasard” Lee took the time to tell Task & Purpose about the human side of flying a high-performance aircraft.

The Air Force is often referred to by other services as the ‘chair force,’ because many of its career fields involve sitting in a chair inside the wire. But winning a dogfight takes a surprising amount of physical endurance. Lee found that out the hard way when he was a student learning dogfight maneuvers. An older instructor wiped him out not just because the instructor had more experience, but also because he was in better shape to handle the Gs.

“In the debrief, after the flight, my labored breathing was evident in the tape,” Lee wrote in a July blog for Sandboxx. “He paused it and said, ‘How did you ever expect to win today? I have 15 years of experience flying fighters, and granted, you don’t have anywhere near that, but I’m also in better shape than you.’”

The normal pull of one G keeps us all from floating into space. But when a fighter jet accelerates, the pilot feels a build up of Gs that multiplies the normal pull of gravity. In plain English, that means a pilot who weighs 160 pounds at one G would weigh 960 pounds at six Gs.

That’s a huge strain on the pilot’s body, which is why Air Force pilots wear specially-designed G suits to keep blood from draining out of the brain and into the pilot’s abdomen and legs. If left unchecked, that loss of blood from the brain can lead to G-induced loss of consciousness (G-LOC).

How do you get in shape for something like G force? Four words: never skip leg day. Having strong leg muscles helps blood from pooling into your legs, Lee explained.

“HIIT training, deadlifts, squats, sprints, box jumps, all that stuff, but the basics is working out the legs,” he said. “That’s something I had to learn. I didn’t realize the importance of physical fitness” for fighting G-LOC.

A G-suit helps of course, “but it comes down to how good of a shape you’re in,” he added.

Pilots also build up a tolerance to Gs by flying a lot and by strapping into a G-force centrifuge that spins pilots around in a controlled environment. Lee said you can see the difference whenever fighter pilots take crew chiefs or celebrities for a ride.

“They feel awful,” Lee said. “They had a good time but they are extremely drained, nobody’s used to these forces on the body.”

“The other day my shoulder was sore from pulling weeds,” he said. “It’s like that.”

Building up a tolerance is also how fighter pilots keep their food down in the middle of a roller coaster maneuver. Still, the long-running joke is that bananas are the best food to eat before flying, because “they taste the same coming up as they do going down,” Lee said.

Sleeping right, working out, and staying hydrated is very important for fighting Gs, Lee said. And yes, staying hydrated actually makes a difference here: according to one study from 1979, just 3 percent dehydration can reduce a pilot’s G tolerance by 40 percent.

The problem is that fighter pilots lose a lot of water before they even get in the cockpit, Lee explained. Just imagine wearing a G suit in the deserts of the Middle East or the humid flightlines of Florida or South Carolina.

“Those G suits are thicker than snow pants,” Lee explained. “You lose the most water walking out to the aircraft, especially in hot environments. The ramp temperature can get up to 120 degrees, and you’re walking out in basically a snowsuit.”

Even when you get in the cockpit, the air conditioning doesn’t really get going until you’re airborne, Lee explained. Then once you are airborne, the air is very dry at high altitude. Some pilots take Camelbaks with them to quench their thirst, but Lee prefers an old-fashioned water bottle. He takes small sips to make sure he has enough to last a seven or eight hour flight.

Of course, all that water has to go somewhere, but taking a bathroom break mid-flight is a complicated process. Fighter pilots pee into piddle packs, which are essentially ZipLoc bags with what looks like laundry detergent in them, Lee said. When using a piddle pack, it’s important to fly smoothly to make sure there is no spillage.

“To pee in the bag you have to be in straight and level flight, not under any Gs, while you unzip your flight suit,” Lee said in an interview with Task & Purpose.

It’s also important to let your wingmen know when nature calls. Air Force pilots use the term ‘racehorse’ to signal that someone is taking a leak, Lee said. When pilots fly together, each aircraft is assigned a number. The lead aircraft is ‘one,’ the second is ‘two,’ and so forth, Lee explained. So if you’re flying in position two and need to pee, you say “two’s racehorse.”

The piddle packs are far from perfect: at least nine fatal F-16 crashes and one fatal A-10 crash were blamed directly on male pilots fumbling with them, according to The War Zone. It’s even more difficult for female pilots to pee mid-flight, which is why the Air Force asked the public in August for ideas for a better “bladder relief system” for female aviators.

The Air Force desperately needs better pee packs, The War Zone reported, because at this point female pilots avoid drinking water so they don’t have to pee mid-flight. That’s a big problem, because, as we now know, staying hydrated is one of the best ways for pilots to tolerate G-force.

Physical endurance isn’t the only thing that makes a good fighter pilot. As anyone who has been on a road trip knows, that there is only so much mental energy to go around. You have to use it smartly, otherwise you might end up dead.

“You have to treat your mind like you do your fuel,” Lee said. “You can burn all your fuel in 10 minutes with an afterburner, but a long sortie might last for eight hours. It’s like taking a test for eight hours straight. You have to pace yourself, otherwise you run out of mental energy.”

Most pilots get into accidents on their way back to base, Lee explained. You might be super-focused in a firefight, but if you relax too much on the way back, it could be just as dangerous.

“In Afghanistan, the mountains are really tall, like 14,000 feet,” the pilot said. “It’s easy to run into those mountains at night or in bad weather, so you need to save your energy until you shut down.”

Related: A fighter pilot breaks down one of his most dangerous tasks: aerial refueling

Lee referred to a tip he picked up from fellow Air Force pilot Chad Hennings, who flew A-10 Warthogs in the Persian Gulf before going on to win three Super Bowls as a defensive tackle for the Dallas Cowboys.

Hennings practices a technique called 5×5, Lee said, where five times throughout the day he’ll silence his devices and sit quietly to recharge his mind. He doesn’t use it mid-flight where he has to stay dialed in, but it helps a lot outside the cockpit.

“I’ve used this technique for several years and it helps me to regulate my mental energy throughout the day,” as Lee explained in a blog post in August. “It prevents me from getting sucked into the various daily fires and burning mental energy that could be used for something more important.”

“Often if you’re decelerating through clouds you get a tumbling feeling, so you have to trust instruments to know better than you do,” Lee said. “You’re fighting your nature, so it takes a lot of training to turn off those senses.”

Still, a pilot’s rear-end can be a good sensor node for reading the airplane in certain situations, Lee explained. One of those is when the plane is about to enter a stall. A stall is when the jet is flying at a steep enough angle that its wings can no longer provide the lift necessary to keep the aircraft airborne. The loss of lift generates a buffeting feeling, like driving over gravel, Lee explained.

“When the jet turns smoothly you don’t feel buffet, but if you feel more buffet it’s like a gravel driveway,” the pilot said. “And lots of buffet is like driving over large rocks.”

‘You get used to it’

Speaking of seats: just how comfortable is a fighter jet seat? Not very, Lee said. The seats may be built to rocket pilots out of a crashing aircraft the instant they pull the ejection handle, but they don’t come with seat warmers or massage rollers.

“There are no creature comforts like that,” he explained. “They are engineering marvels, but they’re all function over form.”

Like pulling high Gs or trusting your instruments, sitting in a cockpit for seven or eight hours straight is another aspect of fighter jet life that Air Force pilots learn to live with over time.

“The seats get pretty uncomfortable,” Lee said, “but after a few weeks you get used to it.”

Related: What it takes to fly the U-2 spy plane at the edge of outer space