“I guess I was nervous the whole time, but I didn’t have time to think about being nervous." 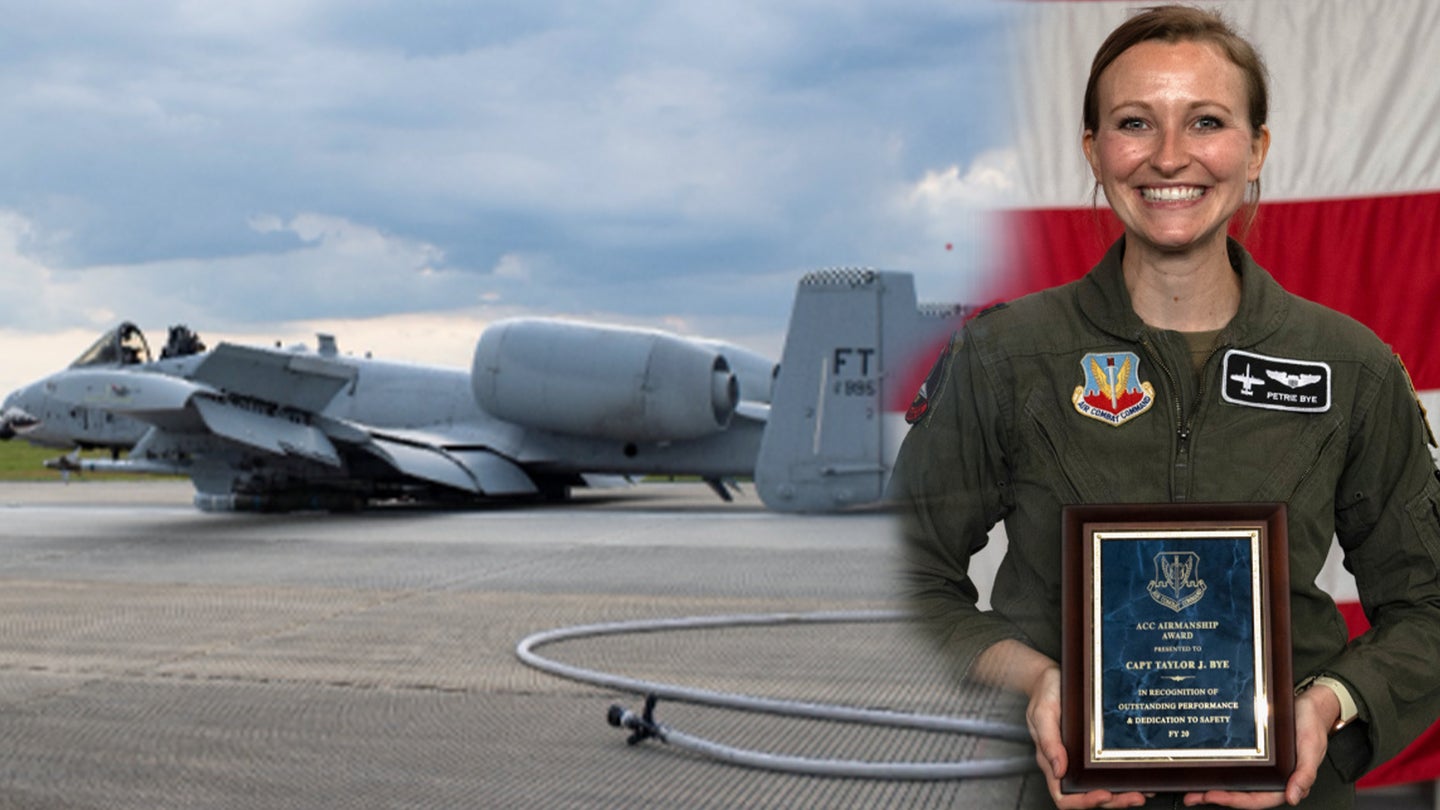 When the landing gear and canopy on her A-10 Thunderbolt II both went bye-bye during a training flight in Georgia last year, Capt. Taylor Bye’s nerves of steel remained, and the Air Force pilot brought the aircraft to a safe landing at Moody Air Force Base despite the challenges.

“I guess I was nervous the whole time, but I didn’t have time to think about being nervous,” Bye said in a recent press release about the incident. “My job was to take care of myself and to take care of the jet.”

A pilot and chief of standardization and evaluation with the 75th Fighter Squadron, Bye was awarded the Air Combat Command Airmanship Award on May 5 for her outstanding performance during that training mission.

“This doesn’t happen very often in the history of the A-10,” said Lt. Col. Stephen Joca, commander of the 75th Fighter Squadron. “There are some steps that were covered in the checklist–the rest was just superb airmanship and decision making.”

Bye was on a basic surface attack ride at Moody’s Grand Bay Range when she tried to fire her GAU-8 rotary cannon, the 30mm Gatling gun poking out from beneath the A-10’s nose. Somehow, Bye’s attempt to fire the weapon resulted in “severe failures that prevented her landing gear from deploying, caused panels to fly off and sent her canopy soaring through the sky,” the press release explained.

In the face of chaos, Bye stuck to her training, climbing away from the ground to take a look at her engines. In a testament to the A-10’s sturdy engineering, Bye still had “two perfectly working engines and hydraulic systems,” she said.

Bye’s wingman, Maj. Jack Ingber, took a closer look at the jet, helping her assess the situation and come up with a plan.

“When you’re in that environment, it becomes very robotic,” said Ingber, a fellow member of the 75th FS and an assistant director of operations. “When anything (unusual) happens, it’s apparent and very easy to spot it and fix it. It’s my primary job to think of everything that (Bye) is not because she has a massive handful of an airplane that is falling apart.”

Keep in mind that Bye’s canopy was gone, so she was trying to fly the aircraft with 350 mile-per-hour winds blowing on her face. The pilot lowered her seat to avoid the wind, but that made it difficult to see the runway.

But luckily, Ingber was there to help guide her down. The major took up the role of chase aircraft, which meant he kept an eye on the surrounding airspace to direct Bye where to go.

“(Ingber) was a huge asset to me out there,” Bye said. “His airmanship was crucial in giving me those pointers and providing the best mutual support I could have asked for.”

Bye joins a proud tradition of A-10 pilots pulling off remarkably smooth belly landings. In July 2017, Maj. Brett DeVries, a pilot assigned to the Michigan Air National Guard’s 107th Fighter Squadron, was also forced to land without both his landing gear and his canopy after his aircraft’s 30mm GAU-8/A Avenger cannon malfunctioned. DeVries was awarded the Distinguished Flying Cross last November for his excellent flying that day.

The Air Force accident investigation board has not yet released its report into the 2020 mishap. But one thing’s for sure: Bye’s one stud of a pilot. Photos of the landing circulated on Facebook in April 2020, earning the respect of many social media commenters who praised the captain’s skills.

“So long as the pilot is ok, that’s a great landing given the circumstances,” wrote one commenter on the popular Facebook group Air Force amn/nco/snco, which has since closed down.

“Great piloting though,” said another.

“And she is loaded,” wrote a third, pointing out the ordnance on the plane’s wings. “Scary tummy slide!!!!”

Related: BRRRT vs. BRRAPP: How Americans describe the glorious sound of the A-10 firing, in 2 maps