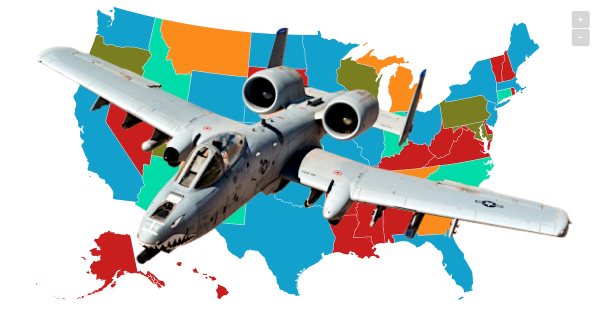 In January, we posed a relatively obvious question to our broad community of service members, veterans, and civilians: How do you spell the sound that an A-10 Warthog’s GAU-8/A Avenger 30mm autocannon makes?

Here’s what we found.

Out of the thousands of people who follow our work on Facebook and Twitter, 673 readers from across the United States took the time to respond to our survey — not a terrible sample size, as far as online surveys go.

The results were nearly unanimous: Out of those 673 respondents, 76.8% of them (or 516 people) agreed that it’s spelled BRRRT.

But what about those other 157 respondents who offered up spellings (and, we imagine, pronunciations) that depart from the BRRRT standard our readers have set? Where are they from, and how do they spell the sound an A-10 makes?

Here’s another map with BRRRT excluded that shows the second-most popular spelling in each state, with the exception of states whose respondents unanimously decreed BRRRT was the correct spelling:

Hey, everyone has their own spelling of the A-10’s beloved battle cry. Retired Air Force General Chuck Horner, who coordinated the air campaign in Desert Storm (where the A-10 first earned its reputation as a tank killer), told Task & Purpose he spells it “AWHOON,” and who’s to tell a four-star he’s wrong?

After all, the most important thing about the A-10 isn’t how the aircraft sounds when it does its job, only that the job is done well. And that, we can all agree, is a task at which the A-10 excels.