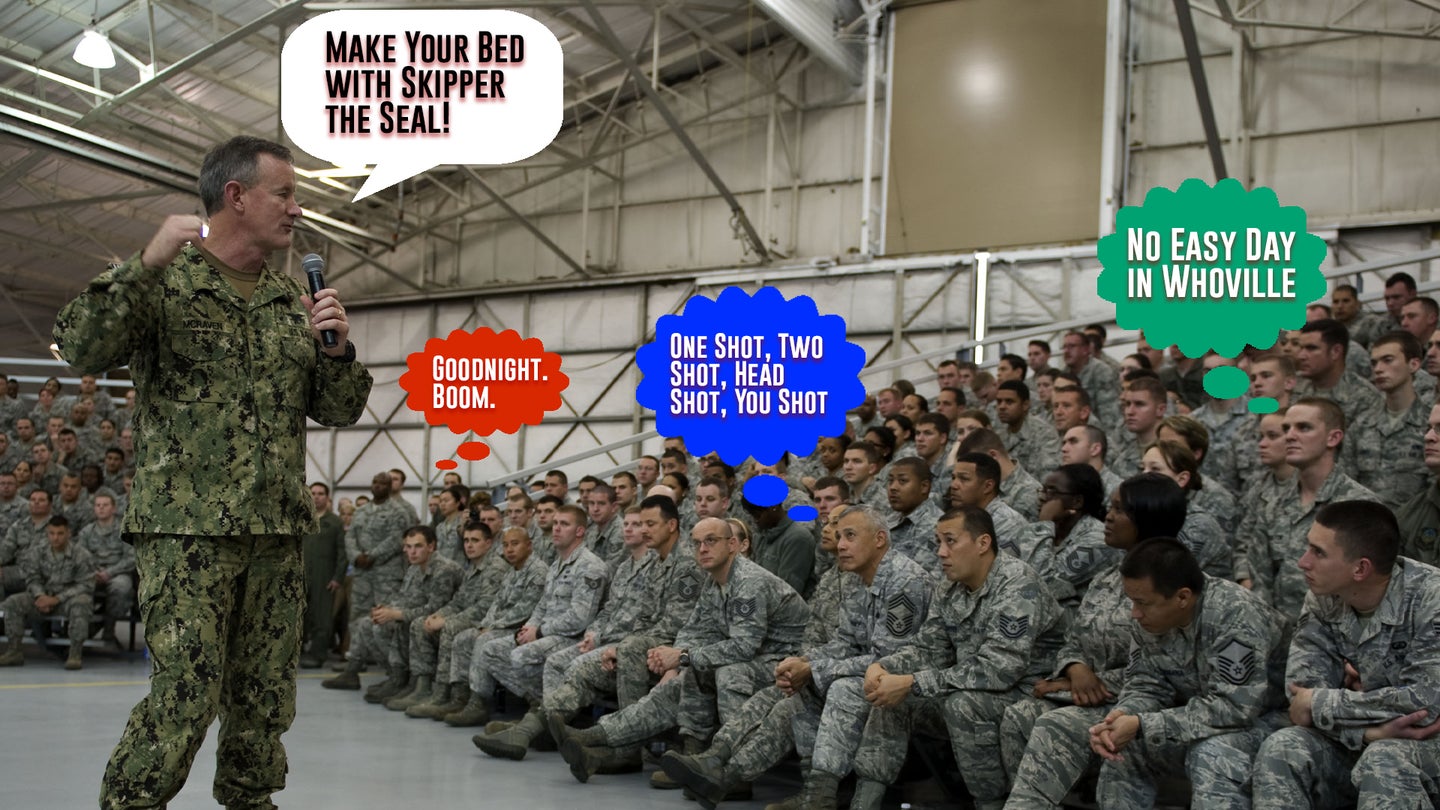 The former Navy SEAL and Special Operations Commander who oversaw the raid to kill Osama Bin Laden is writing a children’s book.

Editor’s note: This article was originally published on Feb. 16, 2021.

That’s right, retired Navy Adm. William McRaven will be writing Make Your Bed with Skipper the Seal, a kid’s book that follows Skipper, a seal who finds himself in Navy SEAL training. And while it sounds like a delightful children’s book, we can’t help but wonder if there aren’t better, or at least more entertaining book titles McRaven could have gone with.

After all, this is a guy whose nearly four decades in uniform spanned from BUD/S to Baghdad, included top-level postings in the service and at the Pentagon, and culminated in the operation that killed Osama Bin Laden in May 2011, during which SEAL Team 6 breached the terrorist leader’s compound in Abbottabad, Pakistan, and killed him.

So, we decided to drum up some ideas among our staff and then figured, “hey, let’s ask Twitter,” for more. We were not disappointed in the responses:

Without further ado, here are some other book titles McRaven might want to consider using, if not for this one, then maybe for a follow-up in a series about Skipper the SEAL.

McRaven’s actual upcoming children’s book, Make Your Bed with Skipper the Seal, builds off his 2017 bestseller Make Your Bed: Little Things That Can Change Your Life… And Maybe The World. It may be tempting to crack jokes about how making your bed couldn’t possibly be all that important; something every single parent reading this, and a bunch of instructors in the military would likely disagree with. The adage is a frequent refrain of McRaven’s — he’s harkened back to that simple act many times over the years, and views it as a stepping stone toward making oneself an effective and impactful member of a team.

And for kids, the message is just as useful: “Making your bed will also reinforce the fact that the little things in life matter,” McRaven said at the University of Texas at Austin 2014 commencement address. “If you can’t do the little things right, you will never be able to do the big things right.”

Presumably, his upcoming children’s book, much like his previous book on leadership, will continue to drive home that theme when it comes out in October 2021.

“When my three children were young, I always took time to read to them,” McRaven said in a recent interview with the Associated Press.”I found that stories of adventure and overcoming challenges helped shape their character and inspired them to be their very best,” he continued. “I hope that ‘Make Your Bed with Skipper the Seal’ is just such a book!”

But as much as we here at Task & Purpose agree that “make your bed, kid” is an excellent framework for a children’s book, and just good guidance in general, we think McRaven may have missed out on a golden opportunity.