We've got you covered, and yes, you're very welcome for our service. Happy 4th of July from all of us at Task & Purpose! 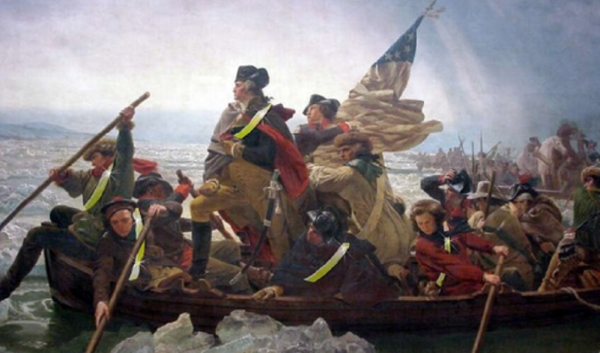 It's that time of the year, you know: hot dog heavy cookouts; a metric shit-ton of light beer stacked neatly in the shape of the American flag at your nearby supermarket; fireworks and trigger warnings about fireworks and rants about trigger warnings about fireworks; American flag-printed clothing in every size and shape, from two-sizes too small booty shorts, and full on adult onesies; and of course the endless stampede of social media posts depicting the Stars and Stripes, bald eagles, presidents, U.S. troops, and random celebrities wearing some version of a spangly outfit.

That day that celebrates that one time a band of scrappy colonists decided “hey, fuck taxation, not in general, but definitely without representation. Let's start a war with the leading world power of the day, and for shits and giggles, let's declare our independence. And to really throw old King George III off his game… let's win.”

While the 4th of July doesn't commemorate the end of the American Revolution, it celebrates that day in 1776 when 56 delegates from the colonies — which included a handful of future presidents, cabinet members, and generally, the cast and crew we tend to think of when we say “founding fathers” — declared that the 13 colonies would henceforth be free from British rule.

In light of this sacred day of flag-waving rah rah 'Mericana, we've compiled this handy list of patriotic razzle dazzle posts so you don't have to scour the underbelly of the internet for that image of George Washington crossing the Delaware with a boat full of glow-belt clad militiamen, or the obligatory “freedom intensifies” Bald Eagle meme.

We've got you, and yes, you're very welcome for our service.

Happy 4th of July from all of us at Task & Purpose!

Yeah, we're all there with you.

Excuse me, do you have a moment to talk about… Freedom?

So that's how they made it through the fog…

You might want to get that checked out… on July 5th.

Shots fired (from the moon)!