The bravery of the 54th Massachusetts Infantry Regiment cemented a legacy that endures to this day, and serves as a reminder that courage knows no color 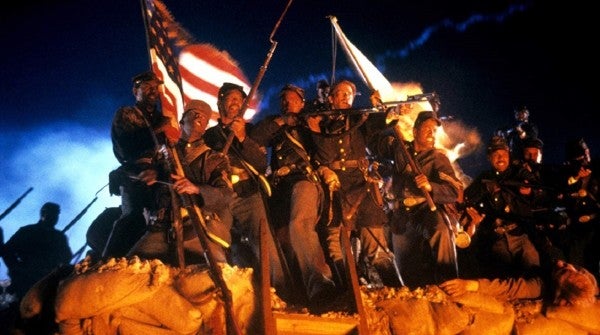 The story of the 54th Massachusetts Infantry Regiment will return to the big screen for two days only when Glory hits more than 600 theaters across the country on July 21 and 24.

The film's return comes 30 years after its Dec. 15, 1989 debut and 156 years after the Second Battle of Fort Wagner in South Carolina, when the 54th spearheaded an assault on the Confederate stronghold.

Directed by Edward Zwick, who won an Oscar for the film, Glory follows the story of the 54th Massachusetts Infantry Regiment, the first Union Army regiment to be comprised almost entirely of black soldiers.

For his role as Pvt. Trip, a former slave who volunteered for the 54th, Denzel Washington won his first Academy Award.

In Feb. 1863, the Governor of Massachusetts, John A. Andrew issued the Civil War's first call for black soldiers. Within two weeks, thousands came, many from out of state and some from as far as Canada. Roughly a quarter of the 54th's enlistees were from slave-owning states in the South and the Caribbean.

Three months later, the newly formed 54th, made up of 1,007 black soldiers and 37 white officers set off for the South (At the time only white soldiers were permitted to serve as officers).

Even as they marched off to war to end slavery in the states, the soldiers of the 54th faced dire shortages in equipment: Everything from decent weapons to uniforms, and boots, and they were paid $3 less than their white peers.

In protest, the regiment refused to accept pay until they were given the same wages as other soldiers — a demand that wasn't met until the Civil War was nearly over.

On July 18, 1863, the 54th prepared to storm Fort Wagner, which protected the Confederate-occupied Port of Charleston. As night fell, Shaw assembled 600 of his men on a narrow sand bar and told them: “I want you to prove yourselves … The eyes of thousands will look on what you do tonight.”

The ensuing battle ended in tragedy. As Shaw led his men over the wall they found that the Union had made a catastrophic error: They believed Fort Wagner had only a small contingent of Confederate troops; instead they found 1,700 Confederate soldiers. Outnumbered, the 54th lost 116 men, including Shaw who was shot in the chest and killed while breaching the fort, with a further 156 wounded or captured.

The first African American soldier to be recommended for the Medal of Honor served with the 54th and fought at Fort Wagner that day: Sgt. William Harvey Carney, who was later awarded the medal on May 23, 1900.

“When the color sergeant was shot down, this soldier grasped the flag, led the way to the parapet, and planted the colors thereon,” according to Carney's award citation. “When the troops fell back he brought off the flag, under a fierce fire in which he was twice severely wounded.”

The battle at Fort Wagner marks Glory's climactic end, and while Union forces were initially repelled, Confederate troops eventually abandoned the fort. And despite the outcome of that battle, the bravery of the 54th cemented a legacy that endures to this day, and serves as a reminder that courage knows no color.

Glory will play in select theaters on July 21 and 24 as part of a special showing by Fathom Events and TCM Big Screen Classics.