"I wouldn’t be where I am today if it wasn’t for people like [Ng] that started that path for me to walk.” 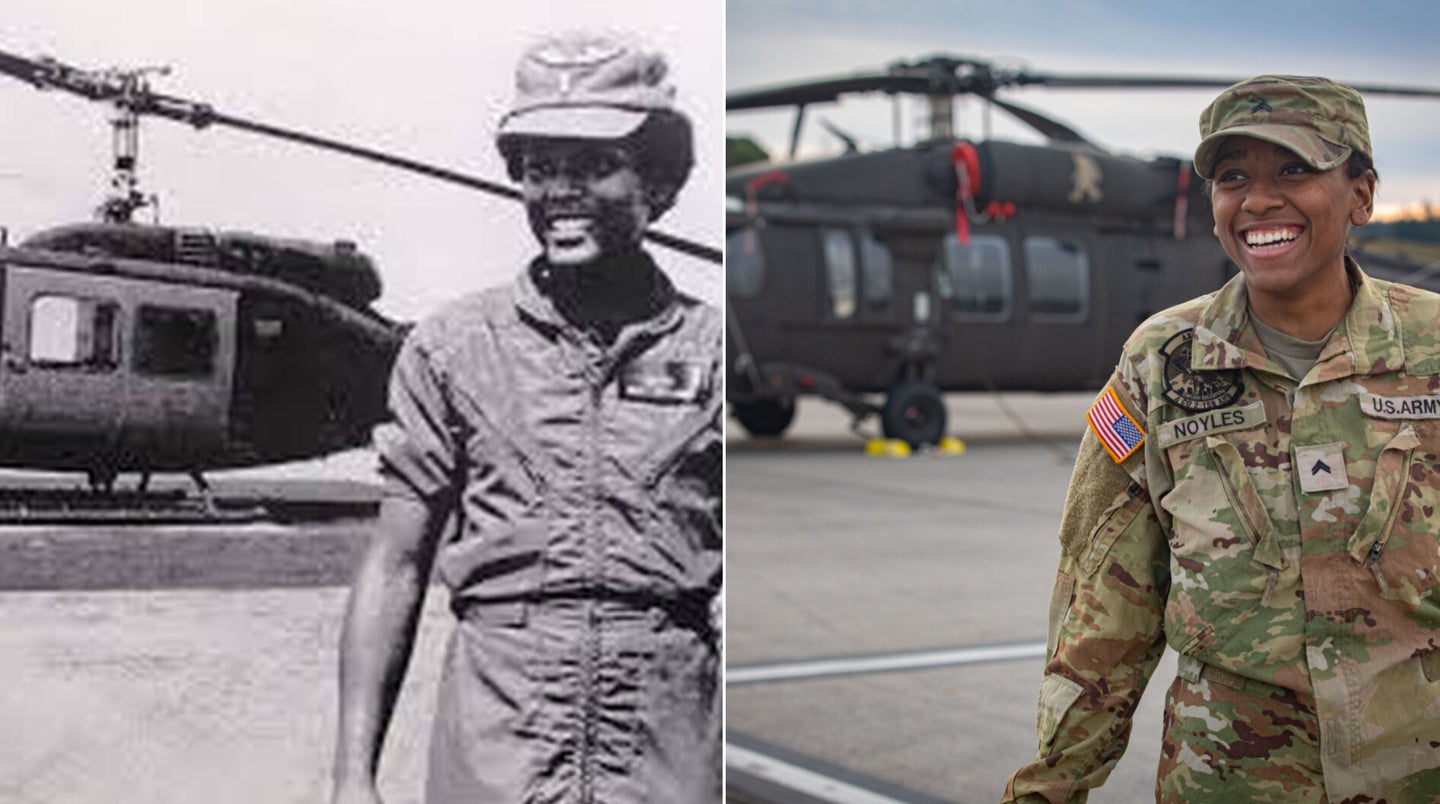 The first time Chief Warrant Officer 2 Daniel Nembhard ever even stepped foot on a plane was when he was 10 years old and moving from Jamaica to Florida.

Now more than 20 years later, Nembhard is an Apache pilot for the U.S. Army, and he recently helped pay tribute to trailblazing Black Army aviators that came before him. He’s one of several soldiers being featured in a project from the 16th Combat Aviation Brigade, which is celebrating Black History Month by recreating iconic and historic photos of Black soldiers with today’s troops.

“February is #Blackhistorymonth2022,” the brigade tweeted on Feb. 1, “and we would like to recognize and honor the soldiers that served in the past by recreating moments with soldiers from the present.”

Capt. Kyle Abraham, a public affairs officer for the brigade, said the idea for the project came from a similar photo shoot that had been done two years ago when soldiers recreated a photo of World War II’s famed Red Tail Squadron, otherwise known as the Tuskegee Airmen. He and his public affairs noncommissioned officer, Staff Sgt. ShaTyra Reed, immediately got to work, hoping to highlight more moments from Army history that people may not be as familiar with.

“We started approaching folks, ‘Hey you want to be a part of this?’ And it had a lot of people excited. Didn’t have to ask someone twice,” Abraham said. “But the coolest part of this for me has been; I’ve been able to track down three of the subjects of the photos and kind of get their blessing and be able to send them the finished product. And you know, just let them know that hey, you’re not forgotten. Your story is out there.”

The photo Nembhard recreated with three other soldiers is one from the Vietnam War, which shows four young men assigned to “Condor” Troop, 2nd Squadron, 17th Cavalry Regiment, 101st Airborne Division. The war in Vietnam was the first time in U.S. history that Black Americans could serve as Army helicopter pilots in combat, the brigade noted on Twitter.

Clyde Romero, who is seen on the far left of the original photo featuring the “Condor Quartet”, told Task & Purpose that the Army wasn’t telling Black Americans or other minorities about the opportunities that existed with flight school in 1969 — he only found out about it because a high school classmate of his who went through it told him. Flight school is already stressful; learning how to fly and how to adjust to the military is not an easy task. But Romero said that being one of the only people of color going through training compounded that stress.

“You just had to endure it,” he said. “You just had to look forward and say ‘I want to do this,’ and get it done, where your White counterparts, to them that was just a big ‘ol highschool.”

Romero is Puerto Rican, but said that in 1969, “if you weren’t White you were Black.” The only time that racial division seemed to lessen was during combat. “Everybody wanted to get home that night,” he said, adding that they weren’t as focused on the skin color of the soldier next to them.

But the moment they returned back to base, “the White southerners wore their Rebel flags,” Romero said. “That was the deal.”

Since then, things have changed. Romero, who left the Army after two years and served a full career in the Air Force before retiring in 1992, said at the time he didn’t realize he and other minority soldiers were doing anything special by serving. Now he knows they “cut through concrete and stone” to make the way easier for future generations and future soldiers — soldiers like Nembhard.

Nembhard first joined the Air Force in 2008 after highschool, right around the time he became a U.S. citizen. He was “fortunate to be in a place where I didn’t feel limited, based on my color,” he said. He enjoyed his career in the Air Force, but in 2015 he realized he was ready for a new challenge.

He was deployed to the United Arab Emirates at the time when he looked up and saw AH-64 Apache helicopters flying overhead.

“It was just amazing to me — outside doing work or on my off time or working out, hanging out, whatever the case was — to look up and see an Apache,” Nembhard said on Wednesday. “I thought, ‘man, this would be super cool to do something like that.’”

So he did. Nembhard left the Air Force as a technical sergeant in 2017, and transitioned to the Army to become a pilot. He went through basic training again, then officer candidate school, and flight school. He’s been flying ever since.

That kind of drive is found elsewhere in the 16th Combat Aviation Brigade, specifically with Cpl. Kayla Noyles, who also recreated an iconic photo for the brigade’s Black History Month project.

Noyles was featured in the first photo, posted on Feb. 1, representing Lt. Col. Marcella Hayes Ng, a legendary trailblazer who became the first Black woman to receive her aviator wings in 1979.

When Ng arrived at Fort Rucker, Alabama, for training in 1979, it was “only the fifth year women attended the school,” according to the Army Women’s Foundation. The flight that earned Ng wings “went perfectly,” the foundation’s website said, yet Ng was “repeatedly told she didn’t meet the standards” after getting assigned to the 394th Transportation Battalion in Germany. She was the first African American and the first woman, according to the foundation, but because they refused to let her fly she “lost her flight status.”

Noyles, who portrayed Ng in the brigade’s photo, said it was “an honor” to participate in the project. She said she knew a little about Ng before being asked if she wanted to recreate her photo, but after doing her own research she was awed by Ng’s resiliency.

“Honestly, I sometimes struggle with having to deal with being the only Black female in my unit, or in my company,” Noyles said. “People don’t understand. And so the resiliency that she had, and all the battles that she faced to get to where she was and accomplish the things that she did, just makes me realize … if she could get through it, I could too.”

Like the icons they portrayed, Noyles and Nembhard are adamant about letting their service further pave the way for other men and women of color who will come after them. Noyles encouraged other people of color not to believe that just because “we’re minorities” in the military, “that we shouldn’t be here.”

“There’s still progress to be made,” she said. “It’s not a battle that is going to end any time soon, but I feel like we’ve made a lot of progress. I wouldn’t be where I am today if it wasn’t for people like [Ng] that started that path for me to walk.”

Nembhard echoed a similar sentiment, though the example he wants to set starts at home, he said. He has three little boys, ages one, five, and seven. As they grow up, he said he wants them to understand the “struggles that people that look like us have dealt with, and the strides we’ve made as a nation.”

“Everything that I’ve done throughout my life, from leaving high school to this point, was trying to do the best as I can and trying to get as far and as high as I possibly can, to then show them what’s possible with the hopes that they can start where I left off and build even higher from there,” he said.