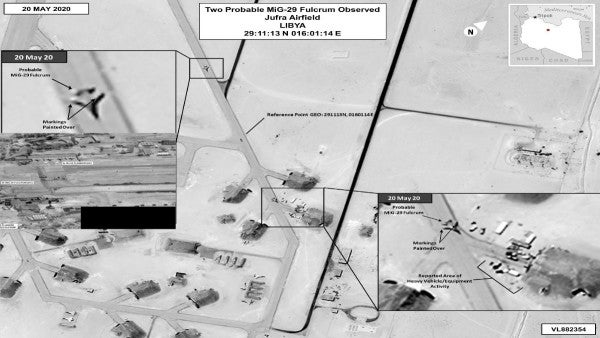 TUNIS (Reuters) – Russian military personnel flew MiG 29 and SU-24 fighter planes to a Libyan airbase escorted by other Russian fighter jets, the U.S. military said on Wednesday, detailing a deployment of air power that could have a big impact on Libya's war.

Moscow backs the eastern-based Libyan National Army (LNA) of Khalifa Haftar in its conflict against the Government of National Accord (GNA), which is recognised by the United Nations and backed by Turkey. Libya is subject to a U.N. arms embargo.

LNA spokesman Ahmed Mismari denied that new jets had arrived, calling it “media rumours and lies”. Last week he said the LNA had repaired four old Libyan jets for use and announced the start of a major new air campaign.

A Russian member of parliament earlier on Wednesday said Russia had not sent any military personnel to Libya and the upper house of parliament had received no request to approve such a dispatch.

On Tuesday, the U.S. military's Africa Command said it assessed that Russia had flown fighter jets to Libya via Syria to support Russian mercenaries fighting alongside the LNA.

It said the jets were repainted in Syria to remove Russian Federation Air Force markings.

In a series of tweets on Wednesday, the U.S. military added that the jets had been flown by Russian military personnel and were escorted to Libya by Russian fighter planes, indicating a higher level of involvement by Moscow.

They first landed in Tobruk, in eastern Libya, and then flew to Jufra in central Libya, an LNA stronghold, the Tweets said. They added that 14 newly unmarked Russian fighter planes had been delivered to Jufra.

Haftar has suffered a series of military setbacks recently in his offensive to capture the capital Tripoli and Russian mercenaries who had left frontlines in the city's suburbs were evacuated from a town further south on Saturday, its mayor said.

French Foreign Minister Jean-Yves le Drian said on Wednesday the situation in Libya was very worrying, warning the Syria scenario was being replicated in the country.