'These Russian aircraft are being used to support private military companies (PMCs) sponsored by the Russian government.' 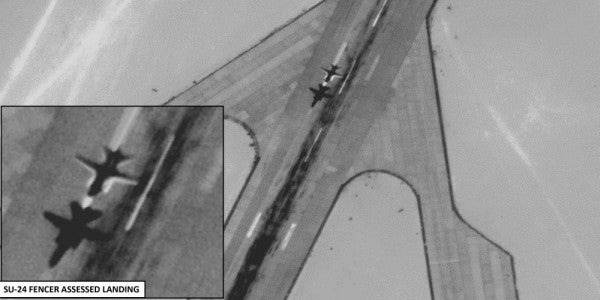 “There is concern these Russian aircraft are being flown by inexperienced, non-state PMC [private military companies] mercenaries who will not adhere to international law; namely, they are not bound by the traditional laws of armed conflict,” Marine Corps Brig. Gen. Bradford Gering, director of operations for U.S. Africa Command, said in a statement. “If this is true and bombing occurs, innocent Libyan lives are at risk.”

In May, AFRICOM confirmed that at least 14 MiG-29 and SU-24 aircraft had flown from Russia to Libya in violation of a United Nations arms embargo. The planes were repainted to disguise the fact that they came from Russia.

Since then, photographic evidence has confirmed that a Russian plane has taken off from al-Jufra, Libya, and a MiG-29 has been photographed operating near Sirte, AFRICOM announced.

About 2,000 contractors with the Kremlin-backed Wagner Group are believed to be in Libya right now to support Haftar’s Libyan National Army.

“We know these fighters were not already in Libya and being repaired,” Air Force Col. Chris Karns, an AFRICOM spokesman, said in Thursday’s news release. “Clearly, they came from Russia. They didn’t come from any other country.”

U.S. military officials cannot confirm that those aircraft have carried out airstrikes yet.

“However, with active flying occurring, the concern is the potential for inexperienced pilots being in the air, especially since Russia denies direct involvement,” Karns said. “The potential threat to civilian lives is a concern when you consider its either Wagner mercenaries or untrained LNA in the air; or if it is Russian pilots, this would represent an escalation.”

“U.S. pilots train to very specific and professional standards,” Karns continued. “Russian-sponsored Wagner mercenaries do not. That should concern everyone.”

President Donald Trump has also spoken favorably of Haftar even though the U.S. government nominally supports Haftar’s opponents, the internationally-recognized Libyan Government of National Accord.

During an April 15, 2019 conversation between the two leaders, Trump “recognized Field Marshal Haftar’s significant role in fighting terrorism and securing Libya’s oil resources,” according to the White House.

Since NATO airstrikes helped depose former Libyan dictator Muammar Gaddafi in 2011, the country has become radically unstable as rival factions have fought for control. Al Qaeda and ISIS have both taken advantage of the chaos to put down roots in Libya.

However, in recent years Libya has become a proxy conflict for regional powers, with Russia and Turkey backing opposite sides.

Turkey has reportedly transplanted thousands of Islamic Syrian militia fighters to Libya to assist the Government of National Accord.