"When I got done watching this.....I shuttered and looked around as if somebody could see my embarrassment," wrote one commenter. 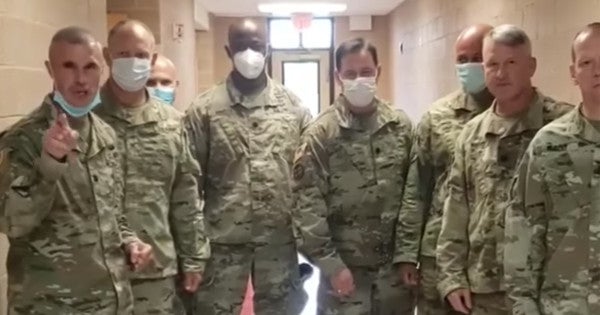 There's a new pitch from the New Jersey National Guard to keep soldiers in uniform, and it features high-ranking soldiers yelling and throwing money at a camera.

“Good morning Jersey warriors! Today my message isn't about physical fitness! It's about unit retention! We need you on the team!” says Lt. Col. Joseph Gagnon in an introduction for the video, which was shared recently on the Guard's Facebook page.

“He's right,” says Col. Robert Hughes, commander of the 44th Infantry Brigade Combat Team. “The brigade is always strongest when we stick together as a team. I need all eligible soldiers to reenlist and stay part of Jersey Blues,” he adds, referring to the unit's nickname.

Then others chime in: One officer mentions bonuses for soldiers who extend anywhere from two to six years. Then another, holding a bunch of cash — including a one-dollar bill placed prominently in front — says that re-enlisting soldiers can make $20,000 if they sign up for six more years (an additional $3,333 per year).

“How does $20,000 sound for six-year enlistments for eligible soldiers?” asks Lt. Col. Omar Minott, before throwing the bills at the camera.

And then, there are soldiers yelling support for their respective fields. “The infantry needs you!” two soldiers yell into the camera.

The video went viral this week, though not because it was well-liked. After being reposted by Recruiter Times, a Facebook page that often critiques Army leaders in charge of recruiting and retention efforts, it was shared more than 2,000 times and received thousands of comments, many of them negative.

“When I got done watching this…..I shuttered and looked around as if somebody could see my embarrassment,” wrote one commenter.

Lt. Col. Barbara Brown, a spokeswoman for the N.J. National Guard, said the video was intended to encourage retention since COVID-19 protocols have made it more difficult to speak to soldiers in person.

“The intent was to provide a creative way to encourage current members to remain part of the unit team while promoting the various [New Jersey Army National Guard] benefits,” Brown said, adding that the state was on track to meet its recruiting and retention mission.

But many found the video to be cringeworthy, off-putting, or worse.

“As an enlisted soldier, having the senior officer leadership of the command basically ordering or guilting me to re-enlist would be a huge turnoff,” one former N.J. National Guardsman told Task & Purpose on condition of anonymity.

“I have to question the decision to exclude the senior enlisted leaders' participation of your target audience is the enlisted soldier,” the soldier said.

“In a time when people are struggling and things are hard, trying to somehow guilt soldiers into signing up or coming back seems wildly inappropriate,” said a junior Army officer, who also requested anonymity. “Their use of guilt … gives me flashbacks of being in trouble, not reminding me of the good parts of an organization I love.”

Still, at least one Army recruiter found the video to be positive and well-intentioned, though he admitted it could have been better.

“This video could use some marketing guidance but I see and feel its intent and it’s all positive,” said Command Sgt. Maj. Justin Cole, the senior enlisted leader for recruiting and retention at the Idaho Army National Guard.

While offering some “armchair quarterback” analysis, Cole told Task & Purpose it would have been better if a better location was used and the video was rehearsed. He also said they should have kept their masks on since they were close together.

“I just want to reiterate that the buy-in and motivation in this video are truly gold and it’s an immediate indicator that the fight to increase end strength is a unified effort in that state,” Cole said.