The Army screwed over soldiers in an enlistment bonus fraud investigation. Now it’s trying to fix it

“It is clear that we fell short in a large number of these investigations.” 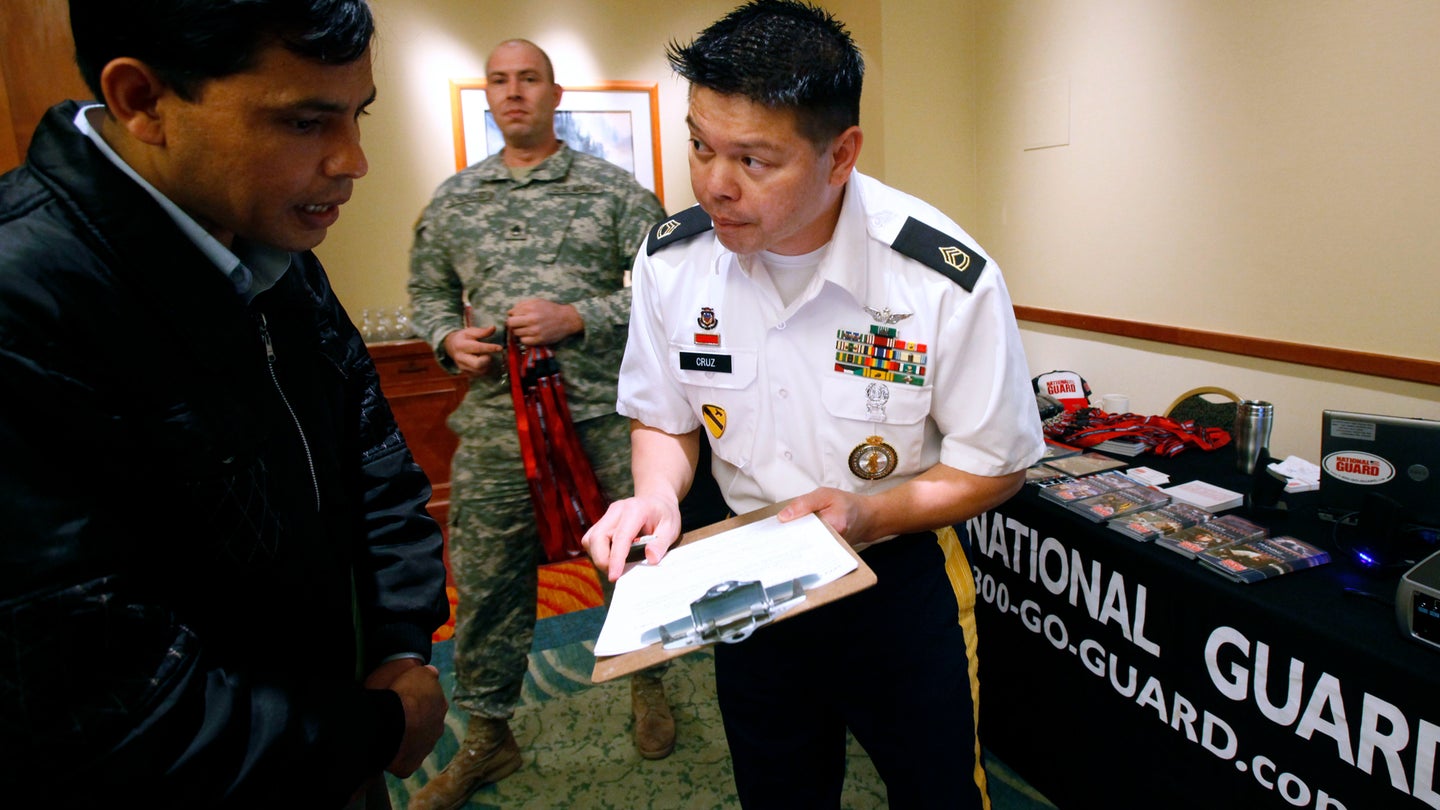 The Army is reviewing the cases of almost 2,000 soldiers who were part of a far-reaching fraud investigation that started a decade ago and who may have been incorrectly added to a national criminal database despite never being charged with any crime.

The Army Criminal Investigation Division is conducting the review of 1,900 soldiers roughly a decade after the service investigated suspected fraud within a recruiting assistance program, officials announced on Thursday.

The Associated Press reported that the investigations involved “100,000 people and hundreds of thousands of dollars in potentially fraudulent bonus payments.” In total, Ford said there were 137 prosecutions and 286 adverse administrative actions as a result of the investigations.

“CID takes our responsibilities in this area very seriously,” Ford said, “and it is clear that we fell short in a large number of these investigations. We are dedicated to completing a review of our processes, policies, and training to ensure that such errors do not reoccur.”

The G-RAP and AR-RAP offered people $2,000 bonuses if they referred someone to an Army recruiter and that individual ended up enlisting. According to Army Times, the program was a success, resulting in approximately 130,000 enlistments in seven years.

But the Army Audit Agency’s fraud-risk assessment “identified systemic weaknesses” in the programs, an Army release on Thursday said, including insufficient oversight and fraud “at recruiter level and below.”

While a small number of the total amount of people involved in the investigation were actually charged, many soldiers who were never charged or prosecuted said they have still suffered adverse consequences.

Army Times reported on one such case involving an active duty officer, Capt. Justin Tahilramani, in Lubbock, Texas, who was identified in his permanent record as having been a subject of a criminal investigation despite the federal government declining to prosecute him.

Tahilramani was titled, a process that occurs when there is “credible information” that the individual in question has “committed and criminal offense, and they are identified by law enforcement as the primary suspect in the investigation,” the Army said on Thursday. And while the Army emphasized that being titled does not indicate guilt or innocence, Army Times reported that veterans have found themselves “entered into an FBI criminal database” anyway.

Indeed, the Army said in its Thursday release that “a number of individuals” were put into the FBI Interstate Identification Index, which is used “to record criminal histories in an effort to better share information between” agencies.

That kind of information can be detrimental to an individual going through a background check for a job or security clearance.

Tahilramani told Army Times that the titling got in the way of his promotion to major, as it came back as “adverse information” in his file.

Now, the Army said it is reviewing titling actions as a result of the investigation to determine if the titling was appropriate or not. If they find that the title was not warranted, their titling record “will be expunged from Department of Defense records,” the release said. While officials said they are conducting a full review of cases, they encouraged people to submit requests for review at CID’s website if they believe they were improperly identified as a result of the investigation.

But for many, it may be too late, and it’s unclear what the Army plans to do about it.

Lt. Gen. Douglas Stitt, the Army’s chief of personnel, told reporters on Thursday that if an individual has a question about their file and what impacts it had on their promotion or separation from the military, they can “come forward with a claim” and the Army will “facilitate and assist them.”

Asked if the Army was prepared to offer any kind of financial assistance to those who may have lost out on civilian jobs or military promotions because of the Army’s mistakes, officials did not offer specifics but said individuals could find answers on the CID’s website and “seek the remedy they need.”

“In terms of individuals impacted by these record corrections, the website that has been referenced multiple times will be a primary source for those to reach out to, to get guidance in order to assist them,” Stitt said. “One, in determining where they think they may have been impacted, and getting relief, whether it be an evaluation which they determine or think may have impacted their moving forward or promotion. All that information is online and the team is ready to assist in that regard.”

The review comes a year since the Army announced a total restructuring at CID by putting a civilian — Ford — in charge of the division and bringing in more civilian investigators. The issue of incentive bonuses for recruitment has also been raised recently, as the Army works to overcome the worst recruiting shortage in decades.

During a roundtable in September with reporters, the head of the National Guard said they were considering the option of paying soldiers a bonus “for anybody that they bring into the organization that’s able to complete their military training.”

Asked how they would prevent having some of the same issues as were investigated in 2012, Gen. Daniel Hokanson said they would implement a “firm set of rules and orders and really set the terms and conditions under which to really eliminate the opportunity for what had happened previously.”

“At the end of the day, it was successful with what it was trying to accomplish, but the means and processes really need to be refined and fixed so that doesn’t happen again,” Hokanson said. “But it’s one of those things, one of many options that we’re looking at.”