Now that’s what I call an American Eagle! 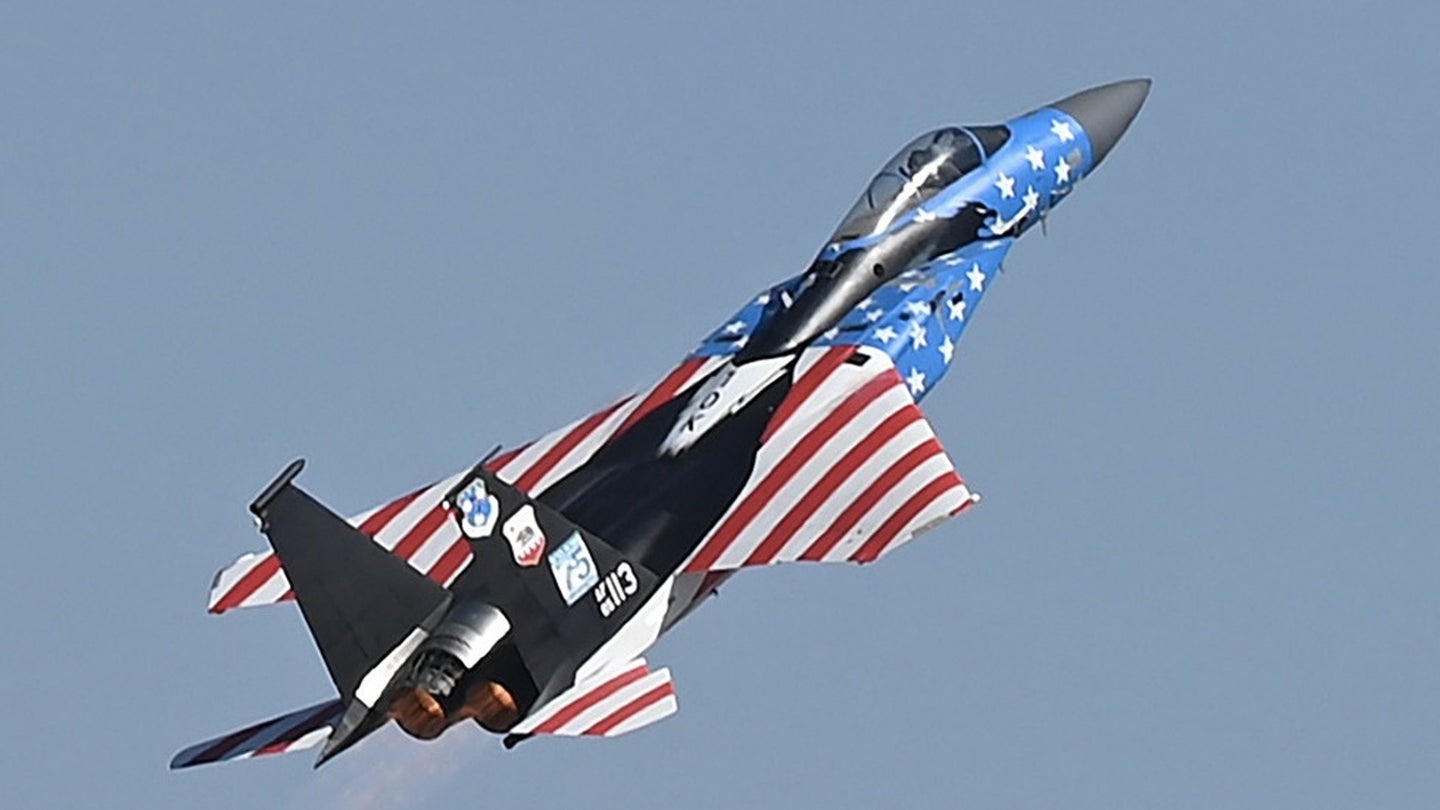 Fans of fighter jets and freedom will love a new F-15C paint scheme unveiled by the California Air National Guard’s 144th Fighter Wing, which on Saturday posted photos of an aircraft  bedazzled in the stars and stripes.

“That’s Tail Flash #113, which recently reached more than 10,000 flight hours,” the wing wrote on its Facebook page. “To celebrate, members of the 144th Fighter Wing painted the aircraft with this special paint scheme.”

The jet doesn’t just look pretty — it flies too. The wing wrote that the jet flew for the first time on Saturday since receiving the paint job as part of a functional test flight.

Though the wing did not provide any more details in the post, we can say with certainty that this is one of the best and loudest paint jobs we’ve seen in a while.

There are other F-15 fighter jets with patriotic paint schemes out there. For example, in July, Royal Air Force Lakenheath unveiled a F-15E Strike Eagle with the stars and stripes wrapped around its nose, tail and wingtips and the Statue of Liberty painted on its speed brake in honor of the 80th Anniversary of U.S. Air Forces in Europe.

The 144th Fighter Wing has also adopted a full-body state pride paint job in the past by splashing elements of the California flag on an F-15’s tail and the wing’s mythical mascot, the Griffin, along its wings, fuselage, and nose.

But the new paint job unveiled Saturday kicks the ‘Murica pride up to eleven by draping red and white stripes down most of the plane’s belly and wings and coating the jet’s intakes and nose with a blue field and white stars. To top things off, a streak of black runs down its spine, with ‘10k’ for 10,000 hours on the speed brake and the griffin painted on either side below the cockpit.

All in all, it’s a pretty sweet look, and we can’t wait to see more shots of the workhorse jet tearing the skies asunder in its new coat of liberty.

It also must have taken quite a lot of paint to cover the massive jet. F-15s are sometimes called “flying tennis courts” because of how big the planes are: 63.8 feet long, 18.5 feet tall, and with a 42.8 foot wingspan, according to the Air Force.

Part of the reason the jet is so big is that it was built around a large radar designed to dominate the skies.

“What’s interesting is the radar for the F-15 was designed first,” retired Air Force colonel and F-15 pilot Brian “Spiderman” Kamp told the Fighter Pilot Podcast in 2020. “They said, ‘to win this war in the air we have to be able to detect other planes. So basic engineering: the bigger the dish of the radar, the further you can see. So they built a three-foot wide diameter dish of radar … what needs to support that? So they built a tennis court behind it.”

It paid off: more than 50 years after its first flight, the Eagle is still undefeated in combat. In fact, the jet’s greatest threat at the moment may not be enemy fire, but instead its own old age.

“These aircraft are not mission capable—and in many cases are no longer safe to fly— because of their advanced age and systems and structures that are failing at increased rates,” wrote the Mitchell Institute for Aerospace Studies, a think tank that studies airpower, about the F-15C and other aging aircraft like the E-8 Joint STARS, E-3 AWACS and several B-1B bombers, in a paper last month.

If all had gone according to plan, many of the Air Force’s F-15s would have stopped flying years ago. The stealthy, nimble F-22 Raptor was designed to replace the F-15 as the Air Force’s premier air-to-air winning machine. The branch originally planned to buy 750 Raptors, but the jet became operational in 2005, right as the Global War on Terror was kicking into gear. The case for an expensive, stealthy, air-to-air platform became more difficult to argue when America’s most urgent enemies fought with homemade roadside bombs, not integrated air defense systems. By the start of the 2010s, Congress decided to cap the total fleet of Raptors at 187, and production of the plane was shut down.

“This decision has proven to be extremely near-sighted given the growing threat of Chinese aggression and Chinese 5th generation fighters and advanced air-to-air weapons that now threaten U.S. air superiority,” wrote the Mitchell Institute in its paper.

The 144th Fighter Wing’s newly-painted Eagle is a great example of the fighter’s old age. The F-15’s initial operation requirement was for a service life of 4,000 hours, wrote the Nellis Air Force Base public affairs office in a 2017 press release about one of its Eagles hitting the 10,000-hour mark. The service life limit of Nellis’ F-15C was extended to 8,000 hours and beyond “because of the need for air superiority,” the release explained.

“To get to 10,000 flight hours means probably a couple hundred thousand maintenance hours have been put in,” said Master Sgt. Joseph Romero, lead production superintendent for the Eagle aircraft maintenance unit. “So for over 30 years, day in and day out, maintainers have done everything asked of them and more to get the aircraft to this point.”

The California F-15C may be in a similar situation, and it’s a credit to the maintainers at the 144th Fighter Wing for keeping tail flash 113 looking so good despite its many hours of flight time. No matter how old 113 gets to be, hats off to the Griffins — and post more pictures of your beautiful jet!