A Look At Air Force Readiness 68 Years After Its Formation

Flying machines have only been around for a little over 100 years, but the state of human aviation as a... 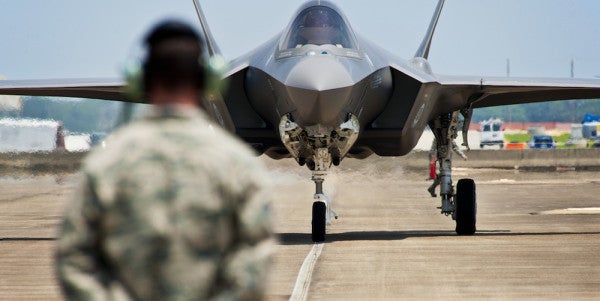 Flying machines have only been around for a little over 100 years, but the state of human aviation as a military discipline has always been dynamic. The U.S. Army adopted airplanes in 1907 under the Aeronautical Division, Signal Corps, but the uniformed piloting of airplanes has never been without controversy.

Several decades of often vigorous disagreement within the Army over what to do with its budding air power was interrupted by World War II, and the debate was shelved. Ironically, it was the extensive strategic bombing campaigns and atomic warfare from that conflict that helped military air power prove itself worthy of becoming a separate service. On Sept. 18, 1947, the United States Air Force was born as part of the National Security Act of 1947. Since that time, the Air Force has proven its mettle time and time again. First in Korea, then Vietnam and Desert Storm, the Balkans, and finally as part of today’s campaigns in Iraq, Afghanistan, and now Syria.

It’s easy to look at history and see where the service has been; many a hero and many a victory can be attributed to 68 years of organized air power led by silver-and-blue-suited men and women. But where is the service going? What does the future hold?

An Airman from the 189th Airlift Wing gives a thumbs-up during a training flight June 8, 2015.The easiest way to break it down is to discuss it in terms of hardware/mission management and people management, but the whole thing must be looked at through the lens of budget austerity.

Since 2013, a severely constraining budgetary policy known as sequestration has forced the Air Force and each of its sister services to make difficult cuts to their people and assets. Unfortunately, the law says these cuts can’t be made “surgically” in programs where financial pain might be smartly absorbed. Instead, they must be taken right off the bottom line. This has led to drastic personnel cuts and has impacted flying hours and aircraft modernization programs, affecting overall readiness and casting doubt on future effectiveness, at least in the short term.

The future of Air Force hardware

In terms of aircraft, the Air Force has taken what some might call a “mixed” approach to its future. Because of sequestration, Air Force senior leaders have had to get creative with their weapons systems in order to make them financially sound. This has meant development of new systems, but also recapitalization of the old ones.

The F-22 Raptor, the Air Force’s most modern fighter, was designed to replace the aging F-15, but the huge cost, upward of $339 million a pop, has been prohibitive to large production numbers, and as of today, only 187 operational versions exist. There’s no question it’s a capable airframe — designed for adeptness in air-to-air roles against the best Chinese and Russian jets or in air-to-ground-roles against enemies like the Islamic State — but to date, few have been used in a combat roles. This is likely to change, however, as F-15s and F-16s — the superstar fighters of the 1970s and 1980s Air Force — start retiring.

The F-35 Lightning II is the next fighter the Air Force is set to employ, and is in its final stages of development and deployment. Intended to replace the aging A-10s and F-16s currently in the Air Force’s inventory, the F-35 will also have short-takeoff and carrier-based versions that the Navy and Marine Corps will use to augment, and ultimately replace, their current fleets of F/A-18 Super Hornets and AV-8B Harriers.

In addition, the F-35 has a significant international component among NATO nations, and will serve under other national flags as well. At $98 million per airplane, the cost of a single F-35 is lower than the F-22, however, the $1.5 trillion project has been rife with major problems, not the least of which are substantial cost overruns. Flight control issues, helmet display failures, and component reliability are among some of the other problems, while delays in major system modules (such as the 25mm cannon, which won’t be operational until 2019 — several years after its initial fielding) have also gained negative attention.

Furthermore, in January 2015, a report surfaced in which test pilots discussed the F-35’s significant operational problems in a dogfight “test” against the F-16, which it is supposed to replace.

Last, ground troops are quick to point out that the F-35 can’t possibly replace the beloved A-10 Warthog, which has enjoyed an almost cult-like respect among infantrymen for its “BRRRRT” 30mm cannon and ability to cause colon-clearing fear among enemy combatants.

One technology that’s taken the aviation community by storm over the last decade is remotely piloted aircraft, and the Air Force has been on cutting edge. Over the next several decades, expect to see the service further develop drone technology. Today, a growing fleet is operated mainly out of Creech Air Force Base in Nevada while the combat systems themselves fly missions worldwide. There are unmanned-aviation proponents who have stated that the F-35 could be the last human-piloted fighter used by the military, and the possibility of remotely piloted airlifters is not a foreign concept to forward thinkers.

In addition to new weapons systems, the Air Force intends on “recapitalizing” many assets that already exist in its current fleet. For example, the legendary B-52 Stratofortress, born in the 1950s, could be in operation through the 2040s, a full 90 years after its first fielding, if an upgrade program gets off the ground.

The Air Force will also dedicate significant resources to modernizing the nation’s nuclear deterrence force — including a potentially budget-busting next-generation bomber — as well as space forces.

Last, the Air Force has engaged on a totally new front in the war to defend our liberties: addressing the cyber threat. Cybersecurity is a new realm that will gain more attention as our enemies make greater use of technology. Under 24th Air Force, an arm of U.S. Cyber Command, the service has dedicated thousands of personnel to fighting the growing threat of cyber attack, which could affect everything from theater combat operations to the American electrical grid.

The future of Air Force personnel

Anyone who’s commanded military units would probably repeat the oft-used cliché: “People are our greatest resource.” Having commanded myself, I can attest that it is a cliché, however, it’s also true. All the cool toys in the world will not replace hard work and human ingenuity when it comes to killing bad guys and winning wars. How will the Air Force take care of and manage its people?

An F-22 Raptor pilot from the 95th Fighter Squadron gets situated in his aircraft prior to taking off from Ämari Air Base, Estonia, Sept. 4, 2015.The 2015 Air Force Strategic Master Plan has an entire annex dedicated to human capital, which outlines its priorities to recruit, train, and retain the best airmen to fly fight and win. This is obviously one of the most important things the service can do, but the strategic goals may not translate into effective implementation in the harsh fiscal environment it operates in. Besides impacting weapons system support and development, sequestration has also had a negative impact on training. Flying hours have taken a major hit, and individual squadrons will find it harder and harder to get their airmen the training they need to operate effectively while at home and deployed.

Sequestration also forced the Air Force to make major cuts to its personnel end strength starting back in 2013, driving numbers down to an all-time low of just over 308,000 airmen. However, increased efforts against the Islamic State and the potential for involvement countering Russia in Ukraine have driven the service to try to bring back some of its most experienced troops starting in 2016. This is a good thing, especially for the most in-demand career fields, which for years have weathered a “six-on, six-off” deployment tempo — not to mention increased one-year deployments for several years straight — where they are on the road for more than half a year, every year.

It remains to be seen how the Air Force will weather the complexities of employment in an uncertain world. Obviously the state of affairs on the international scene, and the degree to which our politicians will answer those affairs with the military, is a significant driver. With that said, politics also drives the budget, and major international engagement can’t happen effectively without a strong national defense. That takes money, for weapons as well as people.

Sequestration and the resulting budget austerity have put a major dent in the Air Force’s readiness and capability for several years in the current political climate, and until the service is allowed to make its own strategic cost reductions — surgically, not bluntly — the future remains cloudy.