While many are excited for the upcoming film “Star Wars: The Force Awakens,” our staff included, the sailors aboard the... 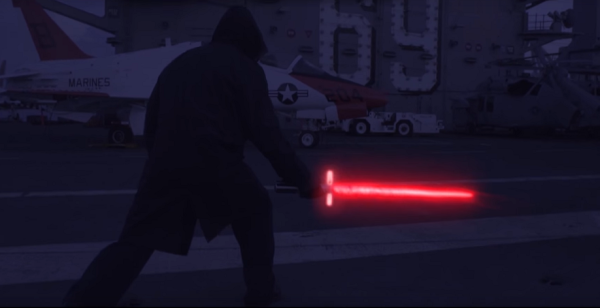 While many are excited for the upcoming film “Star Wars: The Force Awakens,” our staff included, the sailors aboard the USS Dwight D. Eisenhower have taken their enthusiasm to incredible lengths, making a spoof of the trailer. The video, called “Sea Wars: The Ike Awakens,” was uploaded to the carrier’s YouTube page on Nov. 18 and includes the trailer’s original audio with video — presumably shot by the crew — laid over.

The clip opens with a frantic-looking sailor, shot in the same way as the original trailer, and you hear the words: “There has been an awakening. Have you felt it?” Then it cuts to the sputtering noises of a droid dubbed over a mop bucket as it scurries through the galley, and then on to point-of-view shots of Navy fighter pilot’s turned rebel X-wing drivers.

They even fit the crossguard lightsaber in. I didn’t realize those were standard issue in the Navy. Must be nice.

As you watch the trailer, two things become increasingly evident: This crew is pumped up for the newest addition to the franchise, slated to open in theaters Dec. 18. Second, they are also strong in the ways of the force. Or, at least in video editing.