This Marine Vet Legally Changed His Name To Darth Vader

While many jockey for the title of “Biggest Star Wars Fan,” few are willing to go to the same lengths... 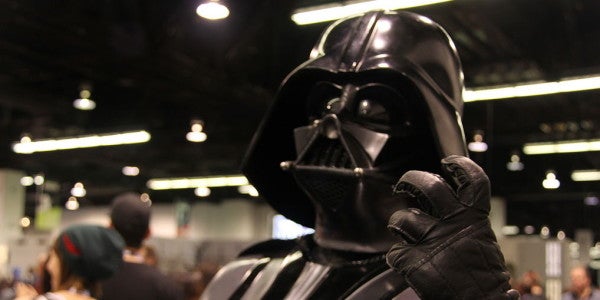 While many jockey for the title of “Biggest Star Wars Fan,” few are willing to go to the same lengths as one western New York military veteran.

In an impressive show of fandom, 43-year-old former Marine Eric Welch legally changed his name last year and became Darth Vader. A spokesperson for the Department of Motor Vehicles confirmed that Darth Vader is indeed his legal name, according to The Associated Press.

Vader, who lives in Canandaigua, New York, is often seen at the gym or at marathons, running with a gas mask and an American flag, reports the Democrat & Chronicle, which broke the story on Dec. 19.

Vader often shows up around town dressed as, well, himself. Eagerly flashing his I.D. to prove he is indeed Darth Vader. A 1991 Penfield High School graduate and Marine veteran, Vader grew up in foster care, and says he didn’t have strong ties to his name.

“I wanted to do something of my own,” Vader told the newspaper, explaining that he lived in eight foster homes and attended 15 different schools growing up. “I had no strong family ties to my name. I wanted a separation from myself and my past.”

His motivation for choosing Darth Vader as his new identity had to do with the Empire’s equipment and the Sith lord’s leadership qualities.

“They had better weapons, better vehicles,” Vader told the Democrat & Chronicle. “I just gravitated toward Darth Vader, he was the man. He carried an aura of leadership, toughness and didn't say much to get his point across.”

Let’s just hope this new Vader doesn’t start using the the Force to choke out any subordinates like his mentor.

Vader also battled with leukemia and a serious bone disorder since he was diagnosed in 2002. His condition is manageable, he said, but will eventually require a bone marrow transplant.

Vader is currently on a bone marrow transplant list at Seattle’s VA Puget Sound Health Care System in Washington state and a crowdsourcing fundraiser has collected just over $15,000 to help with medical expenses not covered by insurance.

Vader owns Allegiant Fitness, a small gym in Canandaigua, and this year he’s completed 13 half marathons and 18 Tough Mudder races around the country.

Vader says that staying in shape and preparing for marathons and runs “gives me something to look forward to,” adding that “it keeps my mind off doctor's appointments, of all that I've gone through, am going through and will continue to go through.”

For Vader, who’s still Eric to his friends and Lord Vader to those who want to be sarcastic about it, his new name helped him change how he views his illness.

“It gives me drive, a reason to never give up and never let leukemia define who I am,” Vader told the Democrat & Chronicle.