8 Photos Of Deployment Puppies That Will Make Your Day Better

While on deployment, sometimes service members come across puppies. It’s almost inevitable that every company and platoon position adopted at... 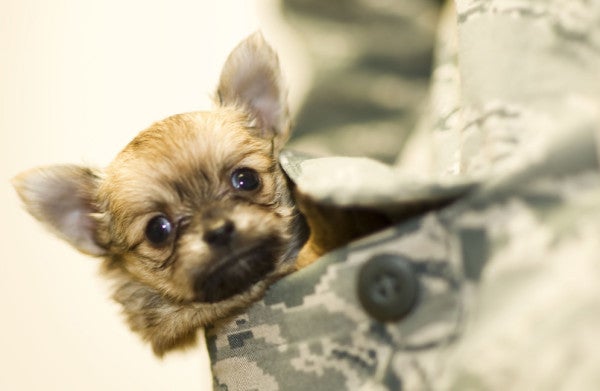 While on deployment, sometimes service members come across puppies.

It’s almost inevitable that every company and platoon position adopted at least one stray dog. The bond usually starts with a service member tossing an unwanted piece of flatbread to a stray eating trash on the side of the road. After that, the deal is sealed, and the unit has earned a mangy but adorable friend for the rest of its tour.

Lance Cpl. James R. Borzillieri, a gunner with 81 mm Mortar Platoon, Weapons Company, 1st Battalion, 6th Marine Regiment, plays with a puppy during his break between patrols, in Marjah, Afghanistan, May 9. Marine and Afghan soldiers went out on a 48-hour operation, where they manned checkpoints and conducted patrols around the market and residential areas in the center of the city.

In the months after the push to clear the city of Marjah in 2010, a small pack of stray dogs had the run of the battalion headquarters, and their ring leader was a cantankerous old mutt with short stubby legs and crooked teeth named Fred, who would follow around the battalion sergeant major in the hopes of getting an MRE as a treat. There were also the puppies that hung around the observation posts, where the rules against having dogs were more or less unenforceable.

These dogs often become a part of the unit’s family, so Task & Purpose took to the internet to find the best photos of puppies on deployment in honor of #nationalpuppyday.

Here are eight puppy deployment photos that are too adorable for words.

Huddling for warmth in Afghanistan

A veteran veterinarian holding a pup

A puppy in Peru, reporting for duty

A puppy and future sheep dog owned by Khalil Abrahim, a wheat and sheep farmer near Al Qayarrah, is uninterested in his master's hospitality toward American guests, offering the Soldiers chai tea outside his home near Al Qayarrah, Feb. 5.DoD photo