There are some very good pups out there who deserve lots of love today (and every day.) 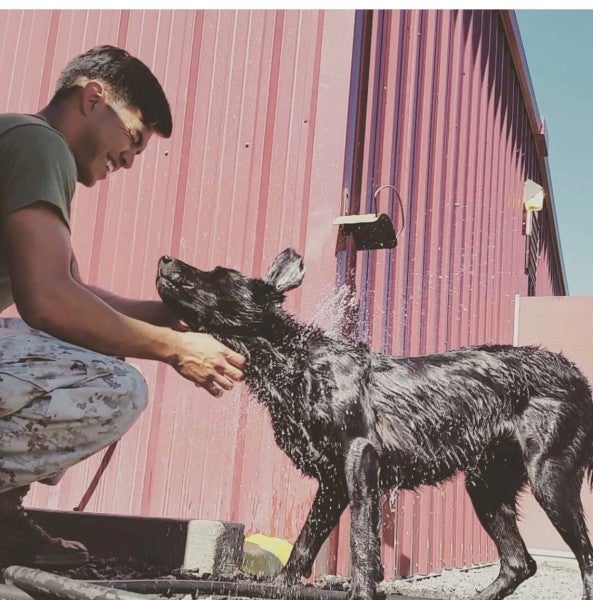 Military Working Dogs are an integral part of many military units, whether they're helping detect explosives or narcotics. For some service members, having a dog around kept them “distracted…from exhaustion, complacency, and being far from home;” and for others, the pups can play a big role as therapy dogs when their service comes to a close.

“These dogs have saved countless lives and prevented innumerable horrific injuries. As a nation, we owe them a tremendous debt of gratitude,” Mike Ritland, a former Navy SEAL and founder of Warrior Dog Foundation, a nonprofit that helps rehabilitate special operation and law enforcement dogs, said in a statement to Task & Purpose.

Dango — a Belgian Malinois — was a military working dog that was trained as both a patrol and narcotics-detection dog, former Army Spc. Jon Zal, who was an Army Military Police K-9 Handler at the National Training Center in Ft. Irwin, California from 1988 to 1992, told Task & Purpose. He was “incredibly smart” and an “absolute chow hound,” Zal said.

“If left to his own devices, he would have weighed 300 pounds,” Zal told Task & Purpose, in what is surely one of the most relatable statements I could ever hear about a dog.

When Zal left the Army, Dango eventually went to work at Lackland AFB as a training dog for new K-9 handlers, where Zal says he assumed is where he lived out the rest of his years. Zal told Task & Purpose it was incredibly hard to leave him behind, especially because he probably “assumed I was coming back the next day, and probably didn't understand why I was giving him a cheeseburger.”

Saber is a black lab and explosive detection dog, who has deployed to the Middle East for base operations with his former handler (and soon-to-be owner) Marine Corps Sgt. Rosendo “Magic” Madrigal, 1st Law Enforcement Battalion, who told Task & Purpose that Saber is “not your typical Military Working Dog.”

“[Saber]…was never trained to do bite work. He is a big love bug and has a very funny personality. … He constantly needs attention and will just come up to you and lean all his weight on you and will lick you a lot.”

Madrigal said that he worked with Saber for three-and-a-half years before being sent to Japan, when the two had to part ways. But a year later, he went back to visit Saber, and now the pup is in “the last steps of his retirement paperwork,” when he'll go home with Madrigal for good.

“He cracks me up,” Madrigal told Task & Purpose. “I cannot wait to spoil him when he's finally done!”

Her owner Emily Demeter, who has no military experience herself but has worked with veterans for several years, told Task & Purpose that when she's in the office, you can find Izzy “greeting visitors looking for all the petting that she can get, or snoring in her bed awaiting the next visitor.”

“When Izzy is not visiting her veteran family,” Demeter said. “She is often at home sunbathing and chasing her squirrel friend Buddy through the backyard.”

Nico served for several years with the Navy SEALs, and completed two tours in the Middle East. He “saved countless human lives, provided a security that simply cannot be replicated,” and was “vital to the success” of special ops missions, the Warrior Dog Foundation told Task & Purpose.

At the Warrior Dog Foundation, Rocky and the other dogs chow down on a beef and veggie mix, with duck fat “to promote a healthy coat,” according to the Foundation.

While Alan is no longer with us, his former handler Air Force Senior Master Sgt. Cleophus Gallon, Superintendent for the 790th Missile Security Forces Squadron, told Task & Purpose that he “has always maintained a place in my heart.”

Gallon said Alan, an explosive detection dog, served three tours in Iraq and saved “a lot of lives,” along with his own. Alan also worked with Gallon on various Secret Service details in the early 2000s.

“After I retire,” Gallon told Task & Purpose. “I will always look back on my K-9 experiences as the best part of my career.”

Former Sgt. Pete Stegemeyer, who left the service five years ago, told Task & Purpose that because they technically weren't allowed to have Mudflap, he and other soldiers would hide him when visitors came and he'd sit “quietly until the coast was clear.”

“He went on patrols with us sometimes and would scare off other dogs we came across, and sometimes prevented people from getting too close to us on patrol,” Stegemeyer told Task & Purpose. “Unfortunately, he was injured during a mortar attack and died from his injuries a week or two later. He was a good boy.”