The 11 best photos of the US military in 2018, according to an award-winning Army photographer

Somebody get me some frames. 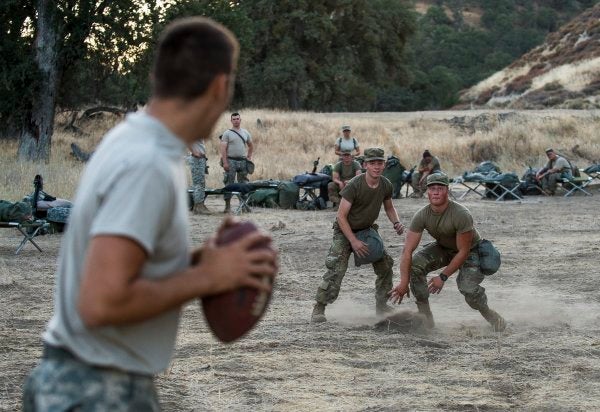 They say a picture is worth a thousands words, so I'll keep this short: These military photos are worth your time.

Army Master Sgt. Michael Sauret, who recently won the Military Visual Award's 2018 Photographer of the Year, told Task & Purpose that the below photos “display the wide range of military moments, from the loud and high impact, to the quiet and subtle.”

“Obviously, military advertising and official DoD web platforms want to show all of the excitement service members have once they join the military. That's what attracts new recruits. But if you serve long enough, you know those moments are very few and far between,” Sauret said. “And yet there is so much richness to explore, document and show the world in the in-between slices of life in the military experience.”

According to the Military Visual Award's website, the contest “highlights the fact that military photojournalists are capable of producing the same quality of work as civilian photojournalists.”

Here are Sauret's favorite photos that placed in the competition.

SEE NEXT: These Military Stock Photos Are So Awful They're Practically Works Of Art

WATCH ALSO: In Praise Of The Stock Photo Hero

“I wrote a whole feature story on The Old Soldier. He's a Korean War veteran. A brutal, brutal war, and despite it all, his Soldiers used to call him 'Smiley Moran' before he took on the nickname 'Old Soldier' in Vietnam. For being a war veteran, he has the gentlest souls. … Photographing older veterans helps us stay humble to remember the souls who served before us.”

“Heather is an incredibly strong woman, and this moment frozen in time — to me — spills beyond the frame because it reminds me of her own personal sacrifices and forsaking her own ambitions for our family. … [T]he power in this image reminds me that I owe all my success to my wife. If it weren't for her, I'd never have accomplished any of this.”

“What makes this image pop is the light, and how this huge aircraft fills the frame, and there's that human side behind the technology. I often say that stories are not about things, they're about people. … This image beautifully connects those two elements in a single frame.”

“I would print this. I would honestly print this and frame it an put it on a wall. There's a beauty to that open sky and just a little bit of dust being kicked up under the Soldier's feet. It makes you wonder about his journey. It feels like a deployment photo, even though it's not. It's very grand and poetic.”

“I can feel that punch slamming into the other boxer's cheek and that burst of sweat shooting out. That lighting is fantastic and the moment is so violent and powerful.”

“I know exactly how this image was made, and yet it feels like trying to decipher a ghost, especially with the see-through remnant of one of the marines hovering in the foreground, and the other two marines frozen by the flash of light below. The layers are stellar. It feels like several moments drawn in at once.”

“You can almost taste that fog or smoke coming in. The mood feels ominous, while this flash of light from the machine gun's muzzle flash burst through. I love that this photographer didn't try to 'fix' the contrast. It would have ruined its authenticity.”

“The light is fantastic, and you know this Marine is about to enact some violence with his fists, yet the quietness of this portrait makes me appreciate this Marine. It makes you thankful to know he's on your side of the fight (beyond the ring)…this moment pauses to appreciate the quiet side before the action.”

“This looks so much fun! Detached from anything, enjoying the free fall. It's one of those images that make you envy someone else's experience of that moment.”

“The composition and the colors of this image pull me in. … It's one of those images that make you wonder about the subject, what he's thinking, what he's experiencing. Does he miss home? Is he trying to solve a problem in his mind? It's such a simple image, and yet the various details, colors and textures keep you in the frame.”

“I just love that orange wall and how the colors pop, and then it brings you in to enjoy this multinational partnership between a U.S. Marine and a Norwegian Soldier. It's a fun, light-hearted image that pierces through what is probably a very serious and important training exercise.”