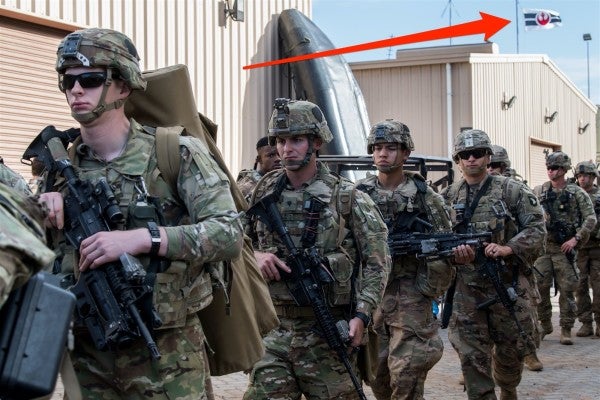 Sitting at the top of an Army press release from March 2019, regarding the East Africa Response Force’s deployment to Gabon, the photo seems, at first glance, just like any other: Soldiers on the move.

But if you look closer at the top right, you’ll find something spectacular: A Rebel Alliance flag.

Is this the real reason for the creation of the Space Force? It’s unclear. But when asked by Task & Purpose if U.S. Africa Command was a part of the Rebel Alliance, Air Force Col. Chris Karns, spokesman for AFRICOM, didn’t come right out and say it — assumedly taking a page out of Princess Leia’s book, when she declined to divulge such information to Darth Vader at the beginning of A New Hope.

But Karns did make it clear that evil wouldn’t stand a chance against their “forces.”

“USAFRICOM and the East Africa Response Force certainly supports restoring order,” Karns said. “And if groups like al-Shabab or other terror groups are on the wrong side of our forces then it will be a very bad day for them.”

It was unclear why the flag was flying, or who put it there, though Karns said he suspects it was raised by “someone with intent to bring a light moment of morale to an otherwise very serious business and mission.”

There are many similarities between the origins of the Rebel Alliance and the U.S. Army. Both were formed to push back against tyranny; both were made up of a rather ragtag bunch — mostly people who weren’t trained soldiers. So is it any surprise that the Army would show support for their galactic brothers and sisters?