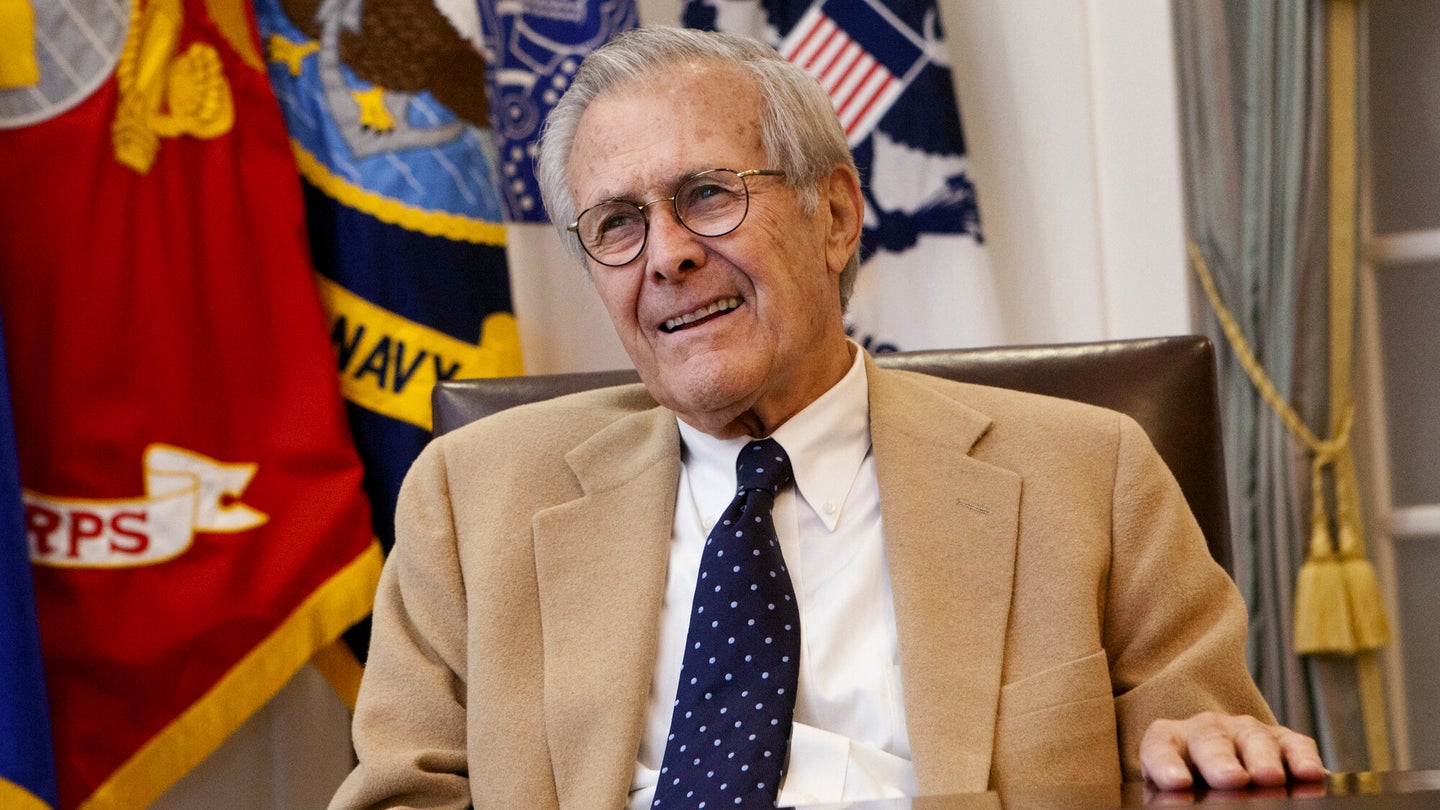 Former Defense Secretary Donald Rumsfeld, who led the Pentagon at the start of the Global War on Terrorism in 2001, has died at 88, according to statement from his family.

“It is with deep sadness that we share the news of the passing of Donald Rumsfeld, an American statesman and devoted husband, father, grandfather and great grandfather,” the family statement says. At 88, he was surrounded by family in his beloved Taos, New Mexico.”

On Sept. 11, 2001, Rumsfeld helped first responders evacuate people from the burning Pentagon after American Airlines Flight 77 slammed into the building. He would go on to oversee the invasions of Afghanistan and Iraq.

“History may remember him for his extraordinary accomplishments over six decades of public service, but for those who knew him best and whose lives were forever changed as a result, we will remember his unwavering love for his wife Joyce, his family and friends, and the integrity he brought to a life dedicated to country,” his family said.

Defense Secretary Lloyd Austin said he was saddened to hear of Rumsfeld’s death and noted that Rumsfeld is a former Navy aviator who continued to serve his country as a reservist until 1975, when he first led the Pentagon.

“Over the decades of his remarkable career, from Congress to the White House to the Pentagon, Secretary Rumsfeld was propelled by his boundless energy, probing intellect, and abiding commitment to serve his country,” Austin said. “On behalf of the Department of Defense, I extend my deep condolences to his family and loved ones.”

A Navy pilot in the 1950s, Rumsfeld went on to serve as a congressman from Illinois and then chief of staff to President Ford before serving as both the youngest and oldest defense secretary in history.

Rumsfeld was also an avid wrestler in high school and college. Among the awards listed on his Defense Department biography is this: All Navy Wrestling Champion. (1956). In February 2013, he wrote an open letter to the International Olympic Committee in protest of its decision to eliminate wrestling from the 2020 Olympics.

“For ten years I wrestled for the love of the sport,” he wrote. “Over the years I have been privileged to see firsthand the positive impact wrestling has had on my teammates, our opponents, as well as on me.”

When he became defense secretary in 2001, the United States was still in a relatively peaceful period following the end of the Cold War 10 years earlier – although Al Qaeda had attacked the destroyer USS Cole in October 2000, a sign of things to come.

The Sept. 11 attacks transformed the U.S. military overnight and Rumsfeld earned praise following the initial campaign in Afghanistan overthrew the Taliban regime through the combination of overwhelming airpower and a handful of special operations forces and CIA officers on the ground.

But Rumsfeld’s legacy will forever be associated with the 2003 invasion of Iraq. He downplayed the collapse of order in Baghdad after Saddam Hussein fell and he later claimed that U.S. troops were not facing an insurgency. He was also criticized for the fact that American service members were still using lightly armored Humvees more than a year after the invasion.

His tenure as defense secretary also includes the Abu Ghraib torture scandal, which a December 2008 Senate report concluded had stemmed from harsh interrogation techniques that Rumsfeld and other top officials in the Bush administration had approved.

In 2006, Military Times wrote an editorial calling for Rumsfeld to resign. Shortly afterward, Rumsfeld was fired when Republicans lost control of the House and Senate in the midterm elections, which were seen as a referendum on the Bush administration’s handling of the Iraq war.

Bush issued a statement on Wednesday describing Rumsfeld as “an exemplary public servant and a very good man.”

“As Commander in Chief, I especially appreciated how Don took his job personally and always looked out for the interests of our servicemen and women,” Bush said. “He was a faithful steward of our armed forces, and the United States of America is safer and better off for his service.”

UPDATE: This story was extensively updated on June 30.