Searching For Booze And Exotic Dancers In The Pentagon

Friends: The most fun part of your friendly Pentagon correspondent’s job is answering questions from readers. Many of you have... 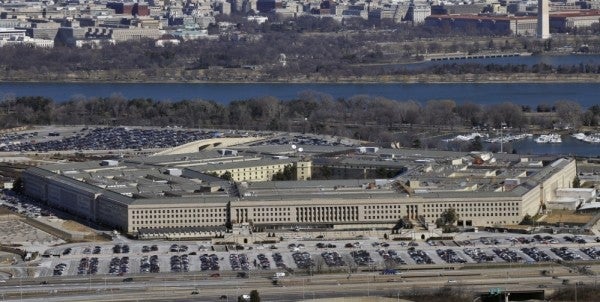 Friends: The most fun part of your friendly Pentagon correspondent’s job is answering questions from readers. Many of you have the type of institutional knowledge that puts Google to shame. Your memories and experiences are priceless.

One such reader is retired Army Lt. Col. Charles Krohn, author of The Lost Battalion of Tet, who posed this intriguing query to Task & Purpose:

“When I was in the Pentagon in DoD public affairs, we had all just returned from Vietnam, most either as pilots or infantry. During those days J-3 had an infamous Christmas party, invitation only, with exotic dancers. Almost all of us kept a jug in our desk, either to celebrate or keep from going mad. It was a very professional environment I will always remember with warmth and affection.

“Does any of that attitude survive today? And if not, how would you characterize the atmospherics?”

First off: We salute you, Lt. Col. Krohn. The short answer to your question is the current atmospherics at the Pentagon are about as wild and carefree as the Roman galley scenes in Ben Hur. In fact, “Row well, and live,” is the title of my forthcoming memoir about working in the Pentagon.

The closest this building has come to letting its hair down since the administration of President George H. W. Bush was this spring, when the Market Basket in the Pentagon food court and other stores gave away all merchandise under $5 for free. The resulting throng of Pentagon employees roaming the building’s concourse with full shopping carts evoked images of East Berliners getting their first taste of capitalism when the wall fell. It was a fleeting feeling that some call, “morale” — forbidden fruit within the five-sided funhouse.

From what your correspondent has been able to determine from walking the rings of the Pentagon, the days of booze and dancers ended at least 25 years ago, when the military started taking a hard line on drunkenness and sexual harassment.

The Joint Staff does not hold “raucous parties,” said Air Force Col. Patrick Ryder, spokesman for the Chairman of the Joint Chiefs of Staff, told T&P.; Nowadays folks “enjoy the spirit of the holiday season in a professional and community-like manner.”

In the 1980s, you could still find top defense officials having cocktails in the Pentagon. But then came the 1991 Tailhook scandal, in which Navy and Marine Corps aviators were accused of sexually assaulting 83 women and seven men. The ignominious episode marked the beginning of the end of many military alcohol-centered events.

The 1990s saw the U.S. military end customs that have been common in the post Vietnam force, said Army Col. Rob Manning, director of Pentagon public affairs. When he first joined the Army, many noncommissioned officers had been arrested for drunken driving; when DUIs became career killers, he said, the military started taking the alcohol much more seriously.

One recent outlier, however, was Navy public affairs’ 2016 Christmas party, when the chief of naval operations’ spokesman at the time reportedly got soused whilst dressed as Santa and made unwanted advances on several women – slapping one on the buttocks. The spokesman was belatedly fired after the media reported about the incident, showing that such behavior is a relic of another time.

All that said, true Pentagon insiders claim the Air Force still maintains a secret bar inside the building. The location of the “Fighter Pilots Bar” is a topic of debate and those who claim to know where it is often say they have never been there in person.

Your humble correspondent has wandered the Pentagon’s halls for 13 years and has never had a sighting of the mysterious Air Force bar. To be fair, there are many places in the building that reporters are not allowed to see, such as the National Military Command Center.

When this reporter first started covering the building, the ultimate no-go spot was the Pentagon Athletic Center, where top military officials get swole. At the time, the Defense Department was worried that unscrupulous reporters like yours truly would try to share a hot tub with then Defense Secretary Donald Rumsfeld or clandestinely meet generals in the locker room with nothing but a towel and shame separating us.

It is highly unlikely that the secret Air Force bar is in the Pentagon gym, but until they let this reporter go there for a schvitz, we will never know.