Mattis: Military Recruiting Will Only Get Harder As The Economy Improves

Task & Purpose Pentagon correspondent Jeff Schogol is currently on the road with Secretary of Defense James Mattis as he travels to... 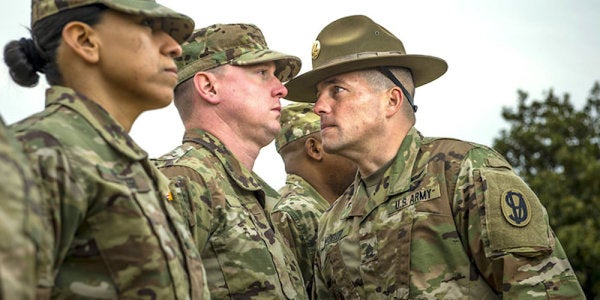 ABOARD A MILITARY AIRCRAFT – You had questions and now Chaos is answering them. Task & Purpose is traveling with Defense Secretary Mattis to India and elsewhere, and your not-so-humble correspondent is asking him questions submitted by readers.

One reader wanted to know if the defense secretary is concerned that the Army will eventually have to lower its recruiting standards. In April, Army officials announced that the service was reducing its fiscal 2018 recruiting goal from 80,000 to 76,000 new soldiers.

“Interesting question,” said Mattis, who acknowledged that it’s going to be harder for the military to find recruits with the economy heating up.

“We have no doubt that as the economy improves we have more competition,” Mattis said. “It’s that simple. So we’ll have to adjust our recruiting in order to maintain the quality standards. But it will be a challenge, I think.”

The military as a whole has been able to attract highly talented recruits since the end of the draft more than 40 years ago, Mattis said on Tuesday. But while Mattis acknowledged that the services have lowered their recruiting standards in the past, he asserted that this has not happened since he has been defense secretary.

“The bottom line is in this competitive world, we’re always competing for the high quality that so far we’ve been able to maintain,” Mattis said. “In fact, the Army, as you’re probably aware, has actually raised its standards – tightened up some if its standards – over the last, say three or four months.”

This correspondent also asked Mattis if he is satisfied with the progress of integrating women into Army and Marine Corps infantry units.

“It’s probably too early to talk about progress because the numbers are so small,” Mattis replied. “I think you need a larger cohort before you can evaluate something like that. Can’t make broad assessments based on very, very few numbers.”

Mattis covered a wide range of issues during his media availability on Tuesday. His trip to India comes amid an expected Syrian regime assault on rebel-held Idlib province. Russian media have recently signaled that the Bashar al-Assad regime might use chemical weapon again by claiming rebels were ready to fake such an attack.

But the U.S. government has “zero intelligence” that any rebel groups in Syria have chemical weapons, Mattis said on Tuesday. ISIS in Iraq failed when it attempted to combine mustard agent with hand grenades.

Related: Trump Tweeted A Warning To Syria And Its Allies. Then The Russian Strikes Began »

Mattis declined to answer directly when asked whether the U.S. government has seen indications that the Assad regime is preparing to use chemical weapons in Idlib province. “We are very alert,” he said.

“We have made very clear that by putting innuendo that somehow any chemical weapons use coming up in the future could be a strike from the opposition, well we want to see the data” Mattis said. “Right now, we have data – not just American data – but international data that the Assad regime has done this before and we are watching very closely for this. We cannot see anything that indicates the opposition has that capability.”