A campaign to prevent the mass discharge of immigrants who enlisted in the Army on the belief that doing so... 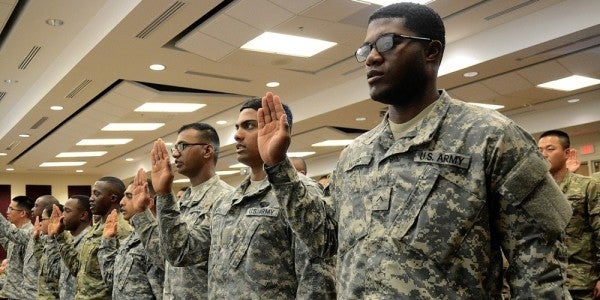 A campaign to prevent the mass discharge of immigrants who enlisted in the Army on the belief that doing so would guarantee them U.S. citizenship has scored a major – though perhaps fleeting – victory over what advocates claim is institutionalized xenophobia.

Meanwhile, the stringent screening process, which can take years and has resulted in tremendous backlog,will continue for the hundreds of MAVNI recruits who joined the program before it was terminated, officials said.

The MAVNI program was launched in 2008 to attract recruits with critical skills who spoke strategically valuable languages, such as Chinese, Dari, and Russian. But the program was ended in 2017 after the Pentagon determined it was vulnerable to insider threats.

After the Associated Press reported in early July that immigrant reservists and recruits were being “abruptly discharged,” a Pentagon source told Task & Purpose that the foreign nationals being separated were either among the last MAVNI recruits to join under the program or they required the most extensive background checks.

However, proponents of the MAVNI program argue that the recruits are being illegally targeted for separation and that the current vetting process is designed in such a way that all but ensures disqualification.

The decision to review the separation process was made just three days after the Army admitted that it improperly discharged Lucas Calixto, a MAVNI recruit who had filed a federal lawsuit in June claiming the Army violated its own regulations by failing to explain why he was being separated. The Army told a federal court on July 17 that Calixto’s discharge has been reversed.

Attorney Margaret Stock, who helped create the MAVNI program, told Task & Purpose the Army's response to the Calixto lawsuit was tantamount to an “admission that they were purging immigrants” from the service. Stock says she has heard from a handful of other MAVNI recruits whose discharges have been reversed.

(A U.S. official confirmed to Task & Purpose that Calixto’s case catalyzed the review.)